I love recording my week by focusing on the best events, the large and small delights.  It helps me stay grounded in thankfulness.  Fortunately, Susanne's weekly Friday Fave Five gives me the perfect opportunity to do just that.
1. For years, The Professor and I have enjoyed taking walks.  We've walked in cities in the US, in England, in Indonesia.  Almost daily, we walk in our neighborhood, and then we try to vary the routine by hiking in a different location once a week.  On Sunday afternoon, we decided to take advantage of the sunshine between rain storms and return to Ventura for another walk.  This time we started near the Ventura Pier and walked north.  I kept looking back at the pier.  Something was wrong.  There were no people. It was empty. 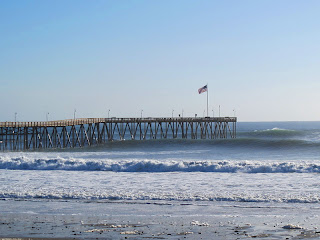 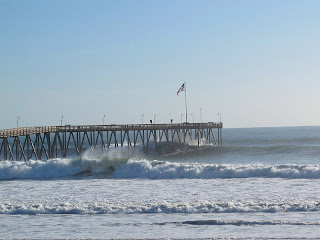 We found out later that due to the extremely high surf, the city had closed the pier Sunday morning.  We hadn't realized that there was a high surf warning for the coast from Ventura County all the way to the Mexican border.
We walked all the way to the mouth of the Ventura River, the same river where we had walked along the rail trail path last week. 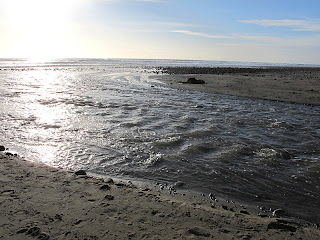 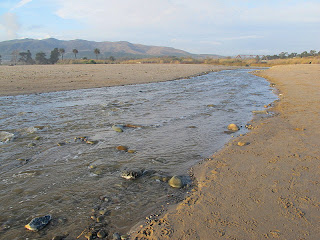 Surfers Point, where the river flows in to the Pacific Ocean, is a famous surfing destination. 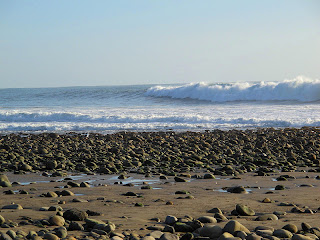 There were a few brave, die hard surfers attempting to ride the big ones. 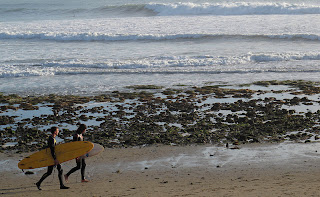 2. One evening this week, we enjoyed hosting friends for dinner.  Great food, great conversation.
3.  Once in a while, I treat myself to flowers from the farmers market.  Lilia, the flower lady, knows I prefer a small bouquet of non-fragrant blooms.  These were a perfect choice. 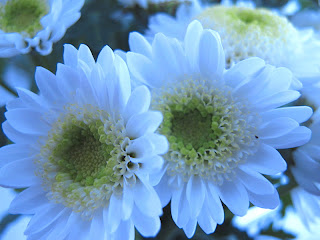 ﻿
4.  Rain.  Southern California doesn't get much rain and we need it.  Two little storms blew through this week bringing a few inches of precipitation.  It was not so blustery and violent that there were floods or slides. A more gentle rain fell.  And one storm arrived on Monday so I didn't have to be out in it.
5. I love words.  I love reading.  When I am home after teaching my writing classes, I don't want to talk anymore for awhile. I sit and read and fill up my empty word tank again. Sometimes I read blogs.  Sometimes I read books.  I just read.
Words, walks, flowers and friends filled my week.  How did you invest your days?

Note:  If I don't get around to read or comment on your FFF posts, it's because internet is out at my house.  The provider is working on it...
Posted by Willow at 9:37 PM 23 comments:

Gardens and Hikes and No Snow

This mid January edition of Willow's Week has been brought to you and hosted by Susanne at Living to Tell the Story.  You can participate too by clicking on this link and signing up with Mr. Linky.

1. Work on the back bank gardening project is progressing!  Our dear friends the Salcedos arrived Saturday afternoon to help us with some of the heavy work like shoving railroad ties around, piling dirt, and planting our California native manzanitas, sages and grasses.  We celebrated with dinner after. 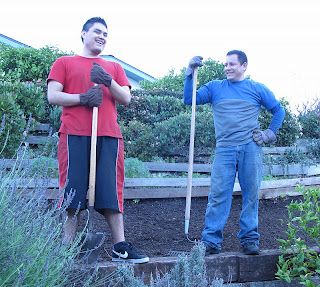 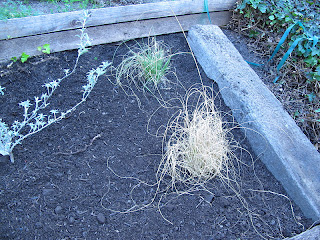 2.  On Monday afternoon, The Professor and I took a ramble along the Ventura River rail-trail path.  It was a perfect day for a hike and we thoroughly enjoyed exploring a new-to-us trail. 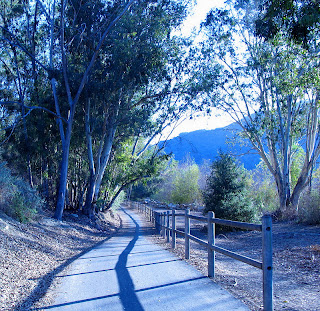 3. No Snow. But we have white in the landscape. All the flowering plum trees are bursting in to bloom. In January. 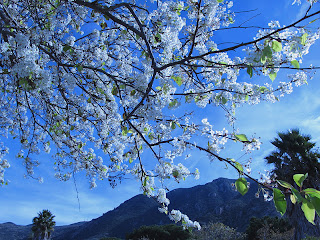 4.  Zicam.  It's this girl's best friend when I feel a cold coming on.  And echinacea tea.

5.  How does killing my cell phone count as a fave?  My phone died a sad and violent death at my own hand, literally.  I dropped it.  It's broken.  For a week, I've been phoneless and I've realized how dependent (addicted?) on it I had become for everything from checking email and facebook and IMing and texting to finding out the time.  And talking to people, even.  It's been a wake up call.  And I'm relieved that my phone is the one on the plan that's insured, which was wise planning on The Professor's part.

Bonus:  Younger son, The Grad Student, celebrated his birthday this week.  His birth, a little premature due to the fact that I had contracted malaria during the eighth month of pregnancy, caused us some trepidation.  But thankfully he was a fine healthy baby.  Because of this, he'll always be my 'miracle boy'.  Happy Birthday!
Posted by Willow at 10:06 PM 19 comments:

Just because I love the photos...
architectural details﻿ 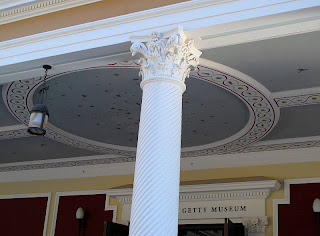 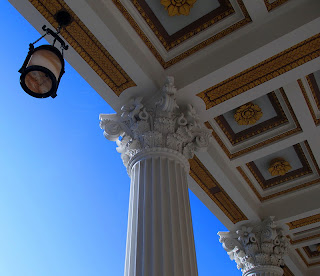 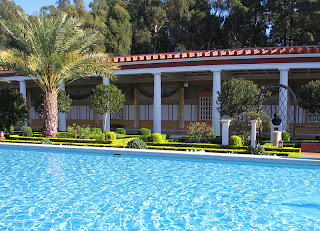 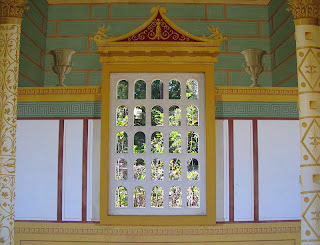 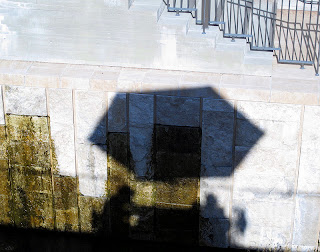 Even our shadows on the wall below the dining patio fascinate me.﻿
Posted by Willow at 8:57 PM 4 comments:

Friday Fave Five
An account of the best parts of my week
An exercise in reminding myself to focus on the positive
Hosted by Susanne at Living to Tell the Story
1.  A Friday out.  We've visited the Getty Villa before, but we decided we really wanted to spend the afternoon there.  Admission is free although there is a parking charge.  Lunch packed, we drove through Malibu Canyon and out to the Pacific Ocean and down Hwy 1 to The Getty Villa where J. Paul Getty built a replica of an ancient Roman villa simply to store his collection of antiquities. 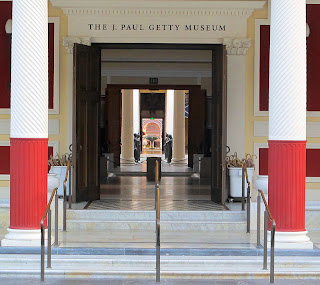 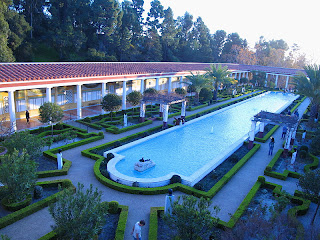 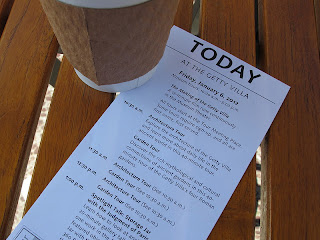 2.  Another adventure.  On Monday, we drove the other direction--to Santa Barbara to visit the Santa Barbara Botanic Garden.  Most of the garden has been left in a natural state and it was a pleasure to walk the paths under the canopy of the gigantic California Live Oak trees. 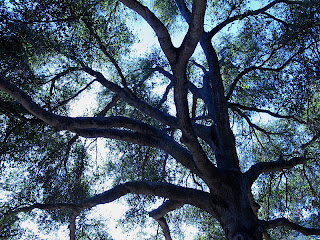 From the creek bed, we climbed the steps 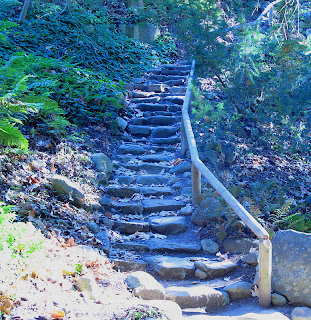 and at the top of one of the hills we could see across the city to the ocean and beyond to the island. 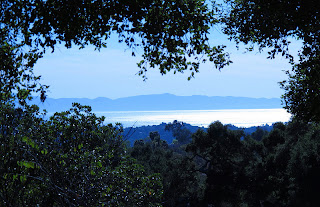 When we turned around, we faced the rugged coastal mountains.  No, that's not snow; it's sand colored bare rock. 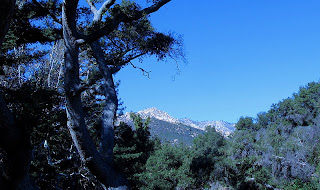 3.  Coffee with a best buddy, just to catch up after the holidays.

5.  Getting back in a routine is always good.  Besides teaching classes again (see #4), I have enjoyed the morning lattes which The Professor provides and the evening walks we've taken together.  The advantage of routine is knowing that I'm going to walk and do other physical exercise which I certainly need because it's simply part of 'my day'.  Routines keep me accountable.

A Day to Remember Always

Friday's Fave Five is a reminder to review your week and focus on your favorite events.  I love thinking back over my week and choosing the best of the best to remember.  We spent most of our Christmas holiday in San Diego with our precious family.  Here are five faves from one of my fave days.
On a perfect sunny day, we visited the San Diego Zoo.  Seven adults to corral four preschoolers.  Mostly, the adults had control.  We certainly all had the best time!
1. A flock of flamingoes greeted us as we entered the San Diego Zoo main gate. 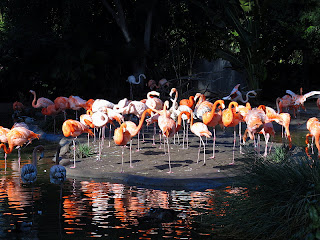 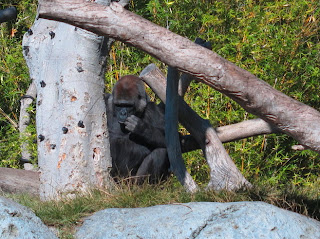 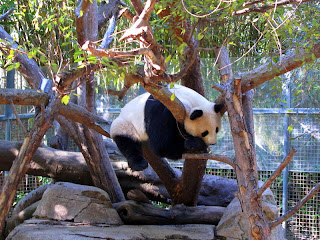 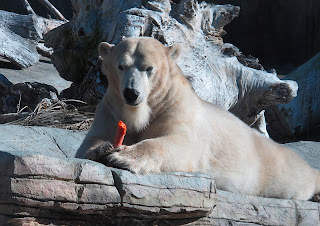 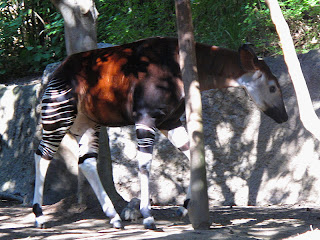 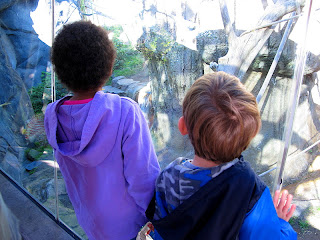 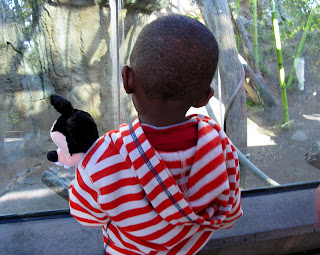 There is no way we could see the whole zoo in one day.  We'll have to return again and again.  Don't you agree?﻿
Thanks, Susanne for hosting Friday's Fave Five. Click the link to participate.
Posted by Willow at 9:45 AM 23 comments:

I Could Do That

Note:  I wrote this little essay on Christmas Day and waited to post it. Not sure why I was hesitant to publish these thoughts. Anyway, here they are:

I have often wondered what my true career, my passion, is.  I love my job teaching writing and composition.  But I fell into teaching quite by accident.  In fact, my choice of an English major in college was simply a matter of convenience and not of passionate interest.

This is what happened.  I was representing the college I was attending in a singing group and was told that I had to write up a little blurb about myself for a press release.  One bit of pertinent information I needed to add was what my major was.  Well, I was an undeclared freshman and being not as directed as some other students, I had no clue.  So another singer in the group suggested, "Just put down 'English' and you can change it when you decide next year."  Fall semester arrived, and since my stated major was 'English' I got signed up for Intro to Poetry and a special Literature class.  I discovered that, Wow, I'm good at this and, you mean, I can read all day and it's considered studying?  Being an English major was enjoyable although I really didn't pick it; it picked me.

Basically the same thing happened in my pursuit of a teaching credential.  I was happily working in my post college position as a clerk/front desk/admin in a small office.  Being one of those weird people who actually enjoys filing, I excelled in my job. But a friend (same one who steered me down the English major path, as a matter of fact) mentioned that the laws regarding granting of the elementary credential were changing and if I didn't finish what I'd started in my last year of college, I'd lose the opportunity to finish the teacher training.  So I did it.  But I think that, at some level, teaching chose me.

As much as I enjoy reading, literature, poetry, writing and teaching, I think that perhaps I missed my passion.  I should have been a clothing designer.

I don't mean the Paris, New York, Milan style of fashion design.  That type of designing annoys me.  Fashion of that kind encourages women (and men) to buy clothing that they don't need with money that they don't have, to become quickly dissatisfied with those items of clothing that they bought with those dollars they didn't have, and to discard the shirts, skirts, slacks and shoes that they no longer want but which aren't worn out or even much used.  No, I would never have wanted to be that kind of a designer.

I ought to be a knitwear designer, someone who develops patterns and knits sweaters to be worn by people who love the clothes they purchase and wear them until they're used up, not thrown aside or given away when the fashion moment is over.  My family tells me that when we are strolling along a street, standing in line for coffee, or sitting in church or a meeting, I invariably focus on the sweater or hat being worn by someone in the vicinity.  Mentally, I dissect the pattern and unravel the stitches.  I work out the increases and decreases. Then I state, "I could do that."  I'll never make designing and knitting a career.  For one thing, in chronological years, I'm beyond the point of switching careers.  Instead, I take my ability to knit and spin and turn it in to real hats and scarves and sweaters and warm the world.  I can do that.
Posted by Willow at 9:30 PM 14 comments: