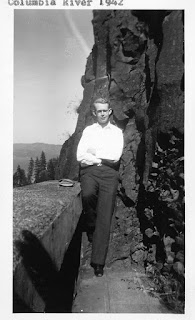 This photo was taken when my dad was twenty years old.  He had left the dairy farm where he had grown up in southwest Oregon.  The youngest of three boys, he had had his fill of milking cows and mucking out stalls.  So, shortly after he graduated from high school, he moved from Myrtle Point with several friends from the football team and took a position at Boeing near Seattle working on planes being built during the run up to the US's entrance into World War II.  Soon after this picture was taken, Dad left for Army Air Force basic training.

Yesterday was his birthday.  He would have been eighty-nine.
Posted by Willow at 10:50 AM

My dad will be 89 in May so your dad and mine could have been contemporaries. What a great photo!

What a handsome lad!

What a great photo! Thanks for sharing something so special with us. And we have a couple things in common-- my Dad designed the jet engines for those planes for most of his life! And my husband grew up milking at the family dairy farm and felt the same way... except he ended up in Technology!! I'm sure your dad is looking down and just as proud as anything of all his family!!!

I have such good memories of "Annie Gernie" and Uncle Frank. --Cousin Jane