Back to the archives.
Trip to London, June 2008 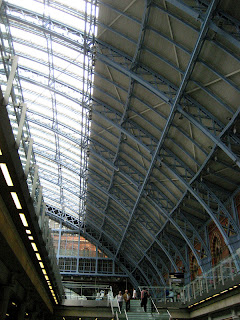 Along the wall just below the junction with the roof, you can glimpse the windows which look like this: 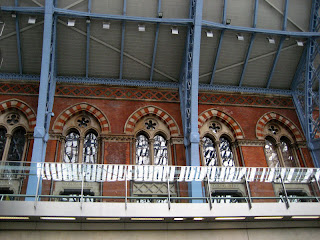 1. The jacaranda trees are blooming!  All year long the jacarandas just stand around in the parking lots and parks and along the streets not receiving much attention.  They're just--there.  But. In. May!  They burst into bloom with riotous purple.  When the jacarandas are blooming, Southern Californians know it's spring. 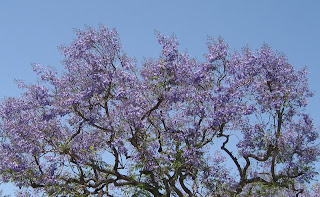 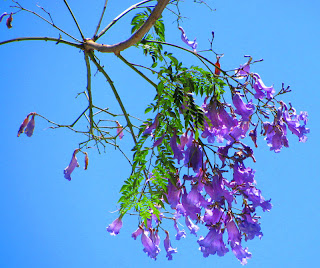 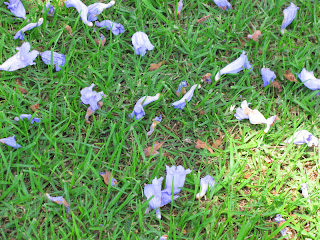 2. Becoming Minimalist scores again.  This post about Raising Justice-Minded Children is a must read for every parent, every grandparent, every aunt or uncle, every adult.

3. Topanga Banjo and Fiddle Festival happens every May.  My spinning/weaving guild is always invited to demonstrate our skills.  This means free entry, an opportunity to bring our spinning wheels and looms and share these ancient arts with everyone who stops to watch us.  I'm constantly amazed at how popular our gathering always is.  We seldom have time to grab lunch or a coffee break.  I love it.  I spent all day Sunday sitting on a porch in the Western town on the old Paramount (Studios) Ranch in Agoura Hills.  If you ever watched a Western movie, you probably saw the buildings where we were.  Although I carried my camera in my bag, I never had a chance to pull it out, but I was asked many times if I would allow my photo to be taken while I was spinning.  So there are lots of photos of me at the festival but none on my camera.

4. Spinning--I began spinning some white alpaca fiber.  There's not much to be photo worthy yet--one spool of cream colored string does not an exciting picture make.  But soon it will grow into two spools and then a skein of plied yarn.  Soon.

5. Last but certainly not least, my summer break has really and truly arrived!  I corrected all the last assignments and mailed back all but three as I am waiting for the mom of the three siblings to send me their new address.  After dropping off the envelopes at the post office, The Professor asked what I wanted to do to celebrate.  I chose a quick trip to the library for MORE BOOKS and then an order of soy hot chocolate to help the sense of relaxation settle in.

This has been Willow's Week.  Thanks to Susanne for hosting Friday Fave Five which gives us an opportunity to focus on being thankful.
Posted by Willow at 8:06 PM 15 comments: 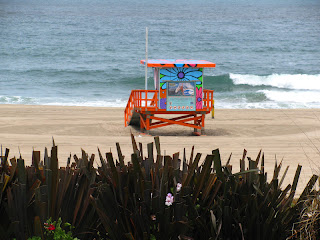 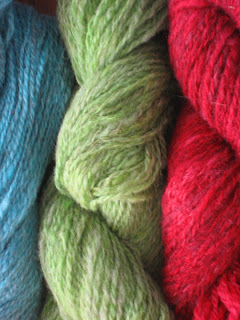 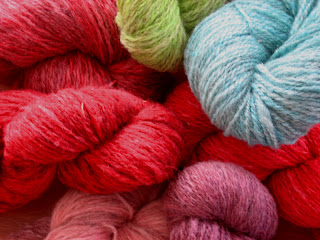 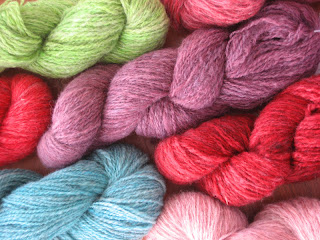 Within a week, I will truly be on summer break.  That's something to be thankful for!  Since it is Friday, I am pausing in the space between end of classes and all papers corrected phases to reflect on a well lived week.  Here are my Friday Fave Fives:


1.  Last week of classes for my writing/composition students.  We had fun playing a form of Jeopardy which I created especially for the classes, and of course, there were snacks brought by ambitious, creative cooks.

2.  This week a friend finally flew to SoCal for a conference and tacked on a few days after to visit me.  We were friends in college and have maintained our friendship through the years.  It was great to show her my part of Southern California because even though she had grown up in LA, she had never seen the area where I live.  (no concrete jungles)

3.  Sunshine.  I love living where the sun shines most of the time, and I don't want to take it for granted.

4.  My garden.  It loves sunshine too.  The lettuces are producing profusely (think: great salads!), the zucchini is threatening to take over the tomato (Who will win the war?), and the basil is growing like a weed (think: pesto!).  Pictures will be coming.  I'm still in last-week-of-school recovery mode.

5.  More baby hats knitted.  But the creative juices are beginning to bubble and boil.  I have cast on for a new project and the yarn for a second project is sitting on a horizontal surface waiting.
Posted by Willow at 10:09 AM 12 comments:

All those April Showers have brought May Flowers. 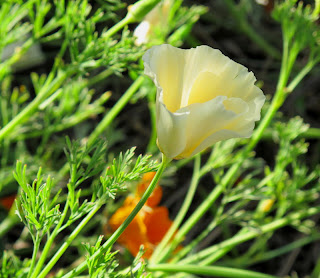 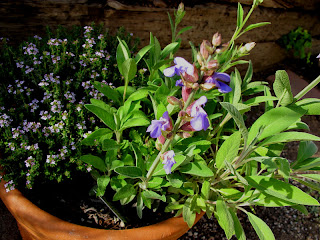 And May Blessings.  Here are Five Faves for This Week.  Brought to you by Susanne at Living to Tell the Story.

1. Ms. P is (one of) my teaching assistant in my composition classes.  Her main responsibilities are to collect, organize and begin to correct papers.  In addition, she is learning how to teach by observing.  I feel very privileged to have the opportunity to be a role model for her.  When we travel to and from our classes, we chat about whatever happens to be on our minds.  One day this week, we were discussing math.  Her comments about geometry (which she understand and enjoys tolerates) were hilarious.   She doesn't love algebra. She loves Comic-Con. She dyes her hair pink--just because. Maybe, she wants to be a teacher.  Certainly, she makes my workdays easier and fun.

2. This email from a student:  "Can you bring the checklist for Book Report week 1 to class for me? I don't dare ask my mom to, she already has printed it out twice."

3. During the time I was awol from cybersphere (tell me you missed me; tell me you noticed), I spent several days playing Meema to this Not So New Boy. 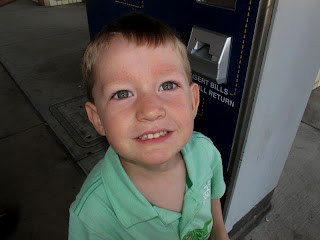 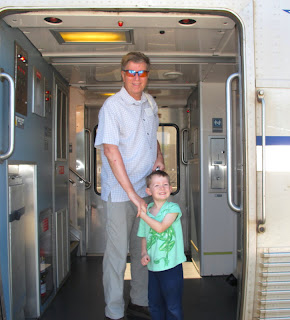 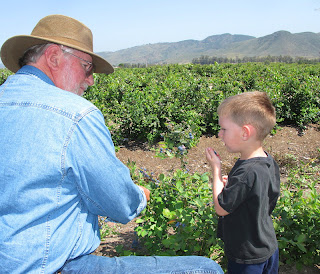 4. Brain dead knitting.  You know how sometimes you hit a wall of creativity?  You just don't have any more ideas or plans?  If you're not a knitter, you still know what I mean.  There's nothing in the brain; you don't feel like starting anything new and exciting.  It's a passing phase, fortunately.  Lately, I've been doing a lot of brain dead knitting.  The local hospital's newborn cap supply closet will benefit.  Making itty-bitty baby hats is so easy and allows me to enjoy the easiest of knitting techniques.  Knit. Knit. Knit.  Over and over and over again.  It's soothing and allows my knitting brain to rest until it's ready to be creative again.

5. Simple meals.  I guess I could call them brain dead dinners.  The Professor and I know how to cook. In fact, we're both quite good cooks.  But sometimes, we just want a simple easy week of meals.  Pasta and marinara.  Brown rice and black beans topped with green salsa and guacamole.  Generally, we prefer our meals simple and uncomplicated.  Several evenings this week, The Professor took over the 'meal assembling'. It's not really cooking because the cooking has already been done.  But it's not really leftovers either.  It's just--simple and nourishing.

How about you?  Anything catch your notice and remind you to be thankful?