I missed last week's FRIDAY FAVE FIVES  Just a really really busy week.  But there were so many blessings in the past two weeks.  What happened?

1.  One day we met our long time friends at Reagan Presidential Library to spend the day touring the Leonardo da Vinci exhibit.  It was wonderful and overwhelming.

2.  While I was waiting in line in the (Ladies Room), a woman looked at me and stated, "I know you!"  She did!  We were friends at church a long time ago.  She recognized me!

3.  AND! She and several friends were at the library celebrating another friend's birthday!  Yes, I know her, too!  What an amazing blessing!

4.  I've been doing a bit of decluttering and passed on several skeins of yarn to my friend who has a weaving studio (here's the link to her facebook page:  Threadbender Textiles).  And she had a bag of sock yarn for me!  I THINK I might have come out ahead of the decluttering, but I'm not quite sure.  But I call it a win-win.

5.  While I was culling my yarn, I found a couple of knitting projects I had forgotten about.  Two hats.   Now I have a couple of projects to finish quickly.  (How do I manage to bury them in a bunch of other yarn?)


Bonus.  I love this quote from Elizabeth Elliot which my pastor's wife posted on facebook:

"To pray 'thy will be done', I must be willing, if the answer requires it, that my will be undone."

How Was Your Week? Here's Mine

I love and need to reflect every week on the blessings in my life  Here are my Five Fave things from the past week. (Follow THIS LINK to join if you want to.)

1.  Eight mile suburban hike.  The Professor and I joined a small group for an evening hike.  Most of it was on a bike path we regularly walk.  It was fun to walk with other people who love to hike.  One woman grew up in Cornwall and we had the BEST conversation about that part of England I love.

2.  Talking with my new Cornish friend made me want to look through the photos I took of Cornwall last spring.  Happy Sigh.


All those NARROW  Cornish hedgerow roads 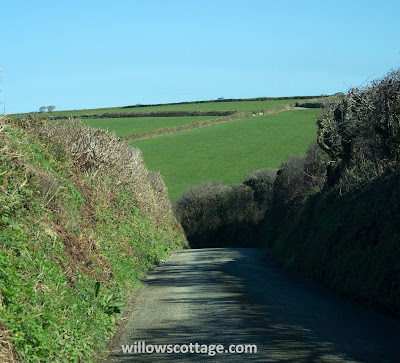 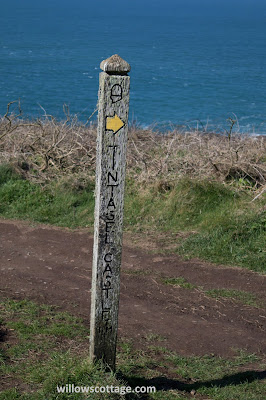 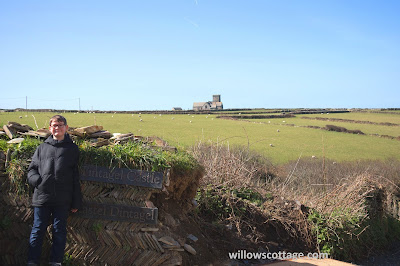 The New Boy at his favorite place.
That building in the background isn't Tintagel Castle.  It's an ancient church which is still used for services. 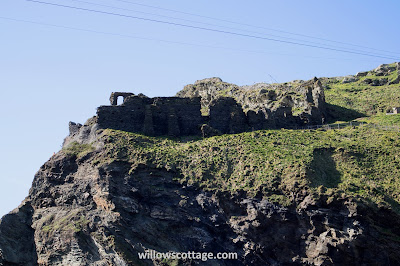 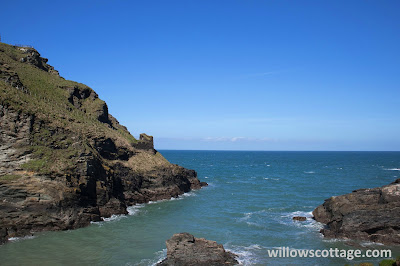 3.  Instagram.  I'm more of a Facebook person, mostly because I am used to it.  Sometimes I forget that I even have an Instagram account.  I realized this week that I have been missing out on some pictures of The New Boy!  His mom posted photos on Instagram of him cooking dinner and breakfast.  Evidently, he really enjoys cooking.

4.  Two doctor appointments this week checked off the list.  Yay!  And everything is ok.  I am cleared for bending and stooping.

5.  I am working again (and again, and again) on those old photos.  This past week I have focused on my oldest son's baby pictures.  He was SO cute! 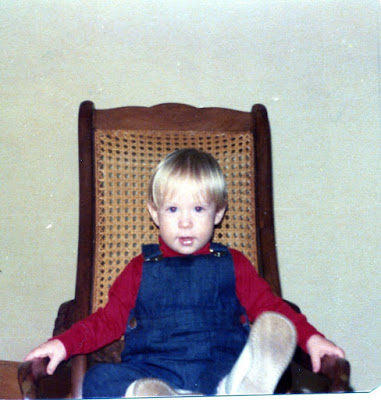 What Made Me Happy

Hello!  August is rolling on and here at Willow's Cottage, the weather is wonderful, and the skies are blue.  Perfect summer weather.  And Willow's Week was quiet and practically perfect.  I'm so thankful for the little things.  Here are my Friday Fave Fives.

1.  We were delighted when a young couple in our church approached us and asked if we would like to join them for lunch at our favorite Mexican place.  It took about ten five seconds for us to enthusiastically reply, "Yes! We'd love to."  An added bonus is that The Professor's sister came, too.

2.  Ventura County Fair!  We went TWICE this week.  That makes a total of three visits to the fair this year.  And we ended up paying a total of $2 for admission.  Day One was Dollar Day, hence we paid our $2.  Then this week, Tuesday was "Old People's" Day and we got in free.  Then today, Friday, we used our free tickets because we hadn't used them on Day One when I came to work in the weavers/spinners booth.

3.  Why would we want to attend the fair so many times?  Mostly, we love the music.  There's one performer who comes from Oregon (he calls his stint at our fair his vacation because the weather and beach is so beautiful) and we love to listen to all his sets during a day, which is three or four performances.  His name is Brady Goss and if you ever have the chance to attend one of his concerts, DO IT.  He's great.

4.  This fave is kinda silly, but it is still a fave.  The Pig Races!  Little pigs race around a track while the announcer makes constant piggy/hoggy puns.  It's just fun.

5.  I have a very dear long time friend who lives not far away.  We have been like ships in the night this summer.  She spent several weeks in another state helping her family as someone was dying.  Then I was gone for a month.  Finally, yesterday, we texted each other and set a meet up.  It was just a bit too windy and cool to sit outside and drink our drinks and it was too loud inside.  So we sat in my car.  Crazy Ladies!  But we were comfortable and had a great time catching up.

So that's how my week shaped up.  None of these events were particularly spectacular, but they were important to me and made me happy.  How about you?

August! Wow!  I'm not ready for August!  But here it is and here it is the first Friday in August.  Fridays are my FRIDAY FAVE FIVES days.  (Follow the link to join in!)

1.  It's FAIR TIME!  Our county fair opened on Wednesday and The Professor and I were there.  We dragged along his sister and nephew and a young friend from church.  Dragged might be a bit of an exaggeration.  They happily accompanied us.  We love the exhibits and the musical group son the small stages.  I'm thankful for where I live!

2.  While I was demonstrating spinning at our weavers and spinners guild booth, they all took off to look at fun things like the stamps section in one of the "hobby buildings" and the photography competitions.  Then they decided to watch the pig races.  From their reports back to me, the pig races may have been their favorite.  I'm thankful they all wanted to spend a fun day with us.

3.  I have also been (FINALLY) organizing and scanning some of our old photos.  After I scan them, I am putting them into various albums.  Right now, I am focusing on the photos from our years in Indonesia.  We lived for three years in the house in the foreground of this photo.  For us, that was luxury living!  We had access to stores, four hours of electricity at night, and running water! 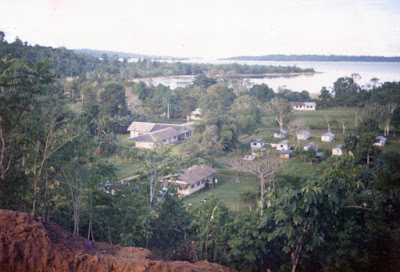 This is where we spent more of our time.
Our home is not in the picture--it was just to the right outside the photo.  The church is the building on the far right.  Only access to the village was helicopter (or walking for a week). 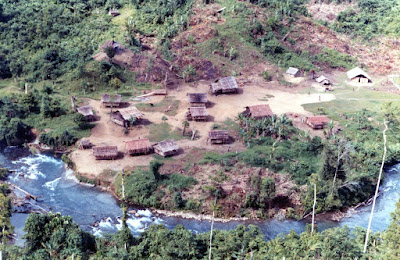 I'm thankful for the years we were able to live and minister in such an amazing place!

4.  The reason I started back up again was that my daughters asked me for some photos of them together when they were young because they are having a birthday party barbeque this weekend to celebrate their birthdays which are two weeks apart.  I found one which I though would be right.  They were SO CUTE! (They still are!)  I'm thankful my girls still love each other and love to spend time together. 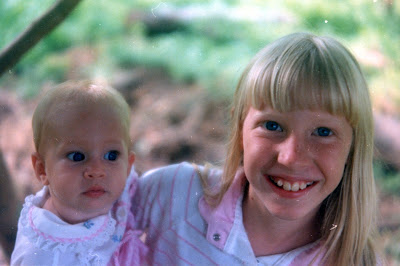 And this one of the three of us 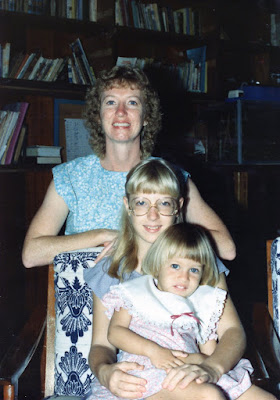 5.  I love to study new things.  Right now, I have TWO NEW THINGS to study.  I just signed up for a free introductory class for making herbal preparations.  AND I checked out some books from the library on sketching.  Why two such different things?  Well, partly because I want to learn about herbs and herbal medicines AND I want to draw the sketches of each herb I study. Now those are not the only reasons for my interests, but that's how these two intersect.  I'm thankful I can learn new things and it's mostly free access to so much knowledge!

What are you thankful for this week?
Posted by Willow at 2:42 PM 7 comments: