Friday Fave Fives
First Week of March 2012
1. Older Daughter was in Southern California last week attending business meetings.  Amid her many hours of work and evenings of gaiety visiting her many SoCal college friends, we managed to grab a couple of hours with her.  When we live 2,400 miles apart, those hours are precious.  What did she want to do?  Eat Indonesian food.  So over our lunch of nasi goreng, gado-gado and soto ayam, we chatted and laughed and reverted back to speaking the (second) language of her childhood.
2.  On the return drive, The Professor and I stopped at LaJolla Canyon just north of Malibu and hiked up just beyond the (dry) waterfall.  It's a steep, deep, narrow canyon which we've hiked before with friends.  I tend to linger behind The Professor with my camera, and then too, he is a much faster walker than I. 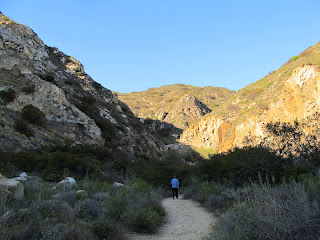 3.  The giant coreopsis are blooming.  These odd gangly sticks are dry and, if you must know, rather ugly most of the year.  But.  In Spring.  Oh they burst into feathery green fronds and bright gold daisy like blooms.  When I see the giant coreopsis shooting up above the buckwheat, sage and manzanita on the hillsides, I know Spring Is Here in Southern California even if the calender states that it's still winter. 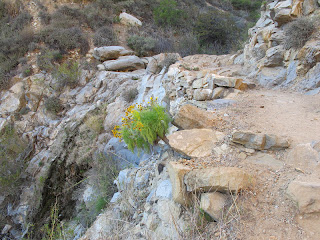 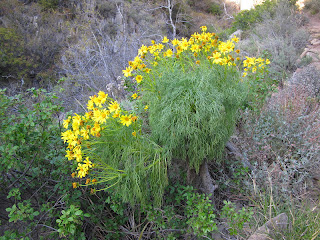 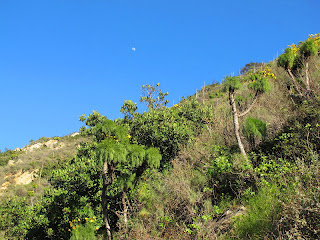 4.  To make the day complete, all the other children who weren't in lunch driving distance called.  Communicating with all my kids in one 24 hour period helped to make this mama joyful and thankful.
5.  After weeks of dilly-dallying and indecision, I finally chose a pattern to knit a sweater with some silk/wool blend yarn﻿ I recently finished spinning.  It's Liesl by Scottish designer Ysolda Teague.  I've been trying to post a photo of the sweater from her blog but so far all my efforts have been unsuccessful.  Basically Liesl is a round yoked cardigan knitted in a simple lace pattern.  I have delusions of finishing the bright green and blue sweater before St. Patrick's Day so I can be wearin' the green.  Do you think I can knit that fast? Yeah, I'm not sure, either.  But at least I made the decision and bought the pattern...
I know that there were many other highlights from this week which I could include, but these five are favorites because my mind  and memory continues to return to these particular events of the past seven days. (I didn't even begin to describe the fun and funny stories my students wrote which have kept me entertained during the hours of correcting mostly punctuation and sentence fragments. And the essays one boy sent me to read which he wrote as part of his requirements for receiving his Hapkido black belt were beautiful and deeply touching.)  This was Willow's Week.  Did you have highlights that are remaining in your mind and memory?
I always link my Friday Fave Fives to Susanne's blog Living to Tell the Story.
Posted by Willow at 8:58 PM

I keep thinking about my hour with my daughter this week. Even though she's only 90ish minutes away,I never get to see her (or my son) often enough.

I have never eaten Indonesian food and so have no clue as to what you are talking about. But it sure sounds like you had a lovely time with your daughter. How cool to speak another language fluently. To become fluent in another language is on my bucket list.

The photos and your description of the SoCal outdoors are lovely, almost makes me want to hike. Almost. ;)

Well I don't know if you'll be able to knit that quickly, but I bet you'll have fun trying. And I hope when you are done, blogger will cooperate and let you post it for us to enjoy.

I'm pretty sure you can get that cute sweater finished by St. Pat's day! After all, you have to be one of the smallest sizes, right? So happy you got to see eldest daughter. Mary P

I can't get over how blue the sky is in your photos! California is so gorgeous. It feels like spring here (or at least it did yesterday when it hit 69º! Seeing the daffodils bloom is probably my favorite part of this week.

We've been having wonderful weather in California that is perfect for being outdoors, so glad you got to enjoy it.

Next time you come to San Francisco, you'll have to try a wonderful Indonesian place on the corner of Post & Jones Streets. Tiny little place, but delicious!

Getting to spend some time with your daughter is priceless, I can see why it's in your faves! I'm counting the days till I see mine. Eleven more days!
Those yellow flowers look amazing, I'm sure it must be a pretty sight in the hillside. I hope you'll have a great weekend Willow!

Happy Spring season to you Willow! We do have a wonderful environment to enjoy here in Southern California.

Your pictures make me want to go "nature walking". :)

I'm so glad you got to spend time with your daughter, especially since she lives so far away!

That is wonderful that you had time with your daughter....and the Indonesian food sounds intriguing. I've only had Japanese, Korean and Thai (I don't count Chinese cause around here it's like american chinese...lol.... but we did have an authentic Korean restaurant we loved!). Family is so important...and I LOVE the photos of your hiking place...a special week for sure!!

I never get to talk with all three of my kids in the same day anymore ... how blessed you were to be able to do so.

Well, you've set your goal to make the sweater and I believe you can do it! Hope you can take a photo of it when completed.

How nice to hear from all your children in one day - almost like a birthday! Ours have all been to see their brother and have shown great support. They're a blessing.

Love your pictures! And I want to see Liesl!

So wonderful to have time together with your kids. And your kids are such NICE people!

That canyon looks beautiful. What a lovely walk that must have been. Glad you got to spend time with your daughter. And time to talk with your other children! Have a great weekend.

I love all the signs of spring! And I can empathize with the jot of hearing from all the kids in 24 hours.

Every moment spent with a grown child who has moved away is sooo precious. I can totally relate.

That hike looks beautiful as do those flowers. It's sunny and warm here today although very windy but I think you might have inspired me to go for a hike myself and take my camera.

That sure seems like a pretty special week...esp talking/seeing your kids!

xprinsa It's hard when they leave. My oldest girl is about to leave NZ and head to the Uk. Im sad but also delighted with her spirit of adventure. Enjoy knitting Liesl.

The weather has been delicious, hasn't it? So lovely that you could share it with your far-away daughter and enjoy it among the coreopsis.

I'm still pinching myself that I was so close to your place...we could of hiked that trail together.
Maybe one of these days we will get it together.
It's rain, sleet, and hail out here.
Time for the sun to poke out.
It's so wonderful for you to enjoy this time with your family and I can't wait to see your green sweater which you can don on St. Patrick's day.

A wonderful week and such a treat to have your daughter visiting! I love the pictures of your canyon hike - it is pretty seeing the Spring wildflowers blooming now. I'm not nearly as ambitious with my St. Patrick's Day plans ~ I'm simply planning on making potato soup and drinking a Guinness beer :)

Our time was too short! You'll have to come visit me now.

It always astonishes me that despite the fact that I haven't practiced my Bahasa Indonesia for years, nor been around people who speak it, I can still understand about 90% of conversations I hear. I do think Bahasa really is sort of programmed into my neurons now. I just wish I could practice to be able to speak more easily and improve my vocab.

I love getting together with my children. It's so hard when they are "grown up" to find time when every one is available.