The local habitat at Willow's Cottage includes feral cats.  I have identified three young kitties.  They appeared more than a year ago, a light ginger kitten, a black kitty with a white bib, and also a mostly black calico cat.  Because they started at the same time darting around the cottage, up the bank and across the street and were the same size, we guessed that they all came from the same litter.  But other than that, neither we nor our neighbors have any more information about their heritage.  Ginger seems to be the alpha cat in the group. I caught him (her?) wriggling out from under my house one day.  We were both rather surprised by the other's presence.  I took immediate action to adjust the cover over that little hole since I really didn't want a feral cat living under my house.
Since my own grandcats are quite fond of catnip, I grow a pot of it in my back garden.  Harvesting and drying it, I give the catnip as little feline gifts to Touchy, Hobbes, Temperance and Rufus at Christmastime. 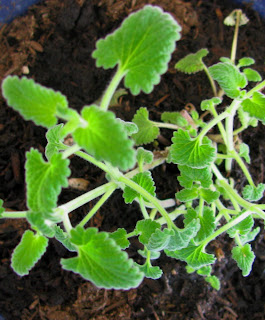 Last autumn, I discovered that the feral cats also like catnip.  They completely destroyed the plant I was growing chewing every leaf and branch and digging up the roots. Those cats!

So I purchased a new plant, moved the pot to a table next to my front door, thinking that proximity to the house would discourage Ginger, Blackie and Calico Kit. And so it did. For a while.

One recent afternoon, as I walked from the mailbox to my front door, I noticed that the catnip that had been nearly ready for harvest was eaten off almost to the roots!  Again!  Those darn cats!  I wondered if they got so stoned that the coyotes or hawks caught them lying around passed out and grabbed them for a quick and easy smoked cat dinner.

Just to be sure, though, I exchanged the catnip pot for one filled with peppermint. Then I brought my poor catnip inside to reside by the back door. There isn't any direct sunshine and it's inside the house, but the catnip seems to be reviving and settling in to its hot house existence.

I saw both Black Cat and Ginger wandering around this week, so either they made it back to their lair before completely passing out, or they found a hidey hole where they could sleep it off before heading home.  Blackie boldly trotted across the front porch, hopped up on the table and started to chew on the peppermint.  Then he stopped, sniffed, sat back on his haunches and regarded the mint with disbelieving eyes.  This was NOT catnip!  Disgusted, he jumped down and huffed off.

Evidently, feral cats don't like peppermint.  Have I seen the last of those cat tails around Willow's Cottage?
Posted by Willow at 1:43 PM

Interesting. Sounds like there are a lot of feral cats in Ca. as Sara has them too.

Your story is too funny. I can't wait to hear how the saga continues. Will the cats come back? Will the plant survive?

I wish I lived closer, I could just take a clipping from your plant, now I'll have to go out and find my own.

Ha ha! What a great post. Years ago, we had a large Catnip plant in the garden and a neighbour's ginger tom cat would spend every sunny afternoon rubbing himself all over in it and then falling asleep right in the middle of the plant. Needless to say, it eventually succumbed and died and the cat stopped visiting. He really was a very beautiful cat with enormous green eyes. Have a good week. Ros

You made me laugh....the thought of those very stoned cats, and the one who tried the peppermint.

You know..I wonder how one is to grow cat nip at all? I told you about my new plant. It wasn't out of the car for two minutes and Bart was onto it! Hmmmm?
Good luck with what you have left!!

Hmm...I bet you don't have mice or rats!

Calico cats are usually female. She may be producing the next generation for you.

The Feral Cat Association (or Society or something) will help you trap and neuter them if you want.

Kyle bought a couple of catnip plants at Home Depot. They lasted almost a week. I think I'll have to grow them inside a rabbit cage.

Wow! I never knew all this about cats! I never knew they liked catnip...just thought it a clever name for the plant. Fascinating!

You are such a great storyteller! I loved this...keep us posted! I want to hear how this all comes out! Love, Janine XO

We have a cat who belongs to the neighbors (who are never home), therefore "Snowball" lives in our yard, jumps into our laps, and lounges on our doorstep. She is crazy about us. It's nice. (and especially nice because we don't have to feed or clean up after her.)

I can't help but to giggle at your darn cats!

I found a good solution for you-- use a hanging basket! I also grow cat nip, and after having neighborhood cats come from miles around to eat it I had the idea to put it in a hanging basket and hang it from my garage gutter. Cats can't reach it and it grows well as long as you water it frequently.

Does your area have a cat rescue society? Those kitties need to be neutered or there will be more feral kittens soon!

Another bunch of stoners in California...and they all swear they have a prescription for the 'nip I'm sure.

Your post made me laugh; isn't that what cats do best?

My dad's cat is named Rufus. He is a hoot!

This little tale of intemperant felines gave D and I a good chuckle. You are an artist with words, fibers, and images!!