It's the third week of December.  As of Friday, December 16, there are nine days until Christmas.  Cards are arriving in the mailbox.  Christmas music is playing in the house and car.  Soon, soon, maybe I'll begin addressing envelopes (yes, I'm running really late this year).  As always, since it's Friday, I'm pausing to post my Friday Fave Fives which is hosted each week by Susanne at her blog Living to Tell the Story.

1.  My daughter's surgery last week was 'uneventful' and considered by the doctor to be 'successful'.  I am thankful for wise and skillful surgeons.

2.  My drive from near the Mexican border north through FOUR Southern California counties, much of it during rush hour traffic, took FOUR hours!  I think that's a record for me.  A facebook friend asked how I'd done that--it was truly mostly luck in choosing the fast lanes and ducking around the back-ups. 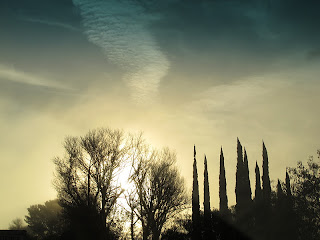 4.  I think I have received a year's supply of goodies as Christmas gifts from my very sweet students--chocolate truffles, peanut brittle, chocolate chip cookies, and chocolate covered raspberry candies, to name just a few.  Undoubtedly, I am going to need to ration these desserts out for the next fifty-two weeks and share them with family, friends and neighbors!  But I'll keep the Starbuck's card for myself.

5.  Anticipation!  I am now on Christmas Break!  Three weeks!

And this Sunday I will light the third Advent Candle.
Posted by Willow at 8:03 PM

Oh I love Advent Candles...I really want to start doing that tradition and I just never seem to get around to it!! WOW...that's some drive you had....FOUR hours!! Yes, we've been getting many treats here too and next week with the school holiday party I am probably going to have to share my stuff too!! but definitely not coffee gift cards! lol....have a great weekend....

Your drive... is just wow! making me remember you had that leg issue weeks weeks back. Yay to the christmas break! Happy Friday.

Rain and sun. Same here all week. Today we're back to rain, but that's okay.

Light those Advent Candles my friend, enjoy those treats over the next year...and have a Starbucks coffee with me.
Enjoy your time off and pick up that knitting and hopefully you will be walking again more quickly again.

I love the photo!

Glad your daughter's surgery went well. I too, have had several reasons to be thankful for wise and skillful surgeons and medical staff of late. We are so blessed to live in a part of the world where this medical care is available.

Hooray for the good news about your daughter's surgery, and hooray for Christmas break! (As for that drive - that's just epic.) Enjoy your time off. I just finished grading today, will file grades on Monday, and am starting to think that maybe I'll survive :)

Our Advent wreath candles are burning too ! Good news about your daughter !

Praise God for your daughter's successful surgery! And for Christmas break! Really praise Him for Christmas!!!

YES to #5, Willow! I'm with you on rationing those treats, too. Hope you have a great week ahead.

I'd never thought of it before but I think you are right, SoCal people ARE sunshine addicts. But the sunshine is so beautiful down there!

Your photos are always beautiful! I'm so glad the surgery went well too. Enjoy the sunshine!

I feel your pain with the Christmas cards, Willow; I'm just getting mine to the post today... So thoughtful of your students to shower you with sweets. Hurray for Christmas break!

Willow, you can email me at the address in the "About Me" section at my blog, if you'd like.