One of Those Weeks

You know those weeks when things just hum along, those weeks which are neither exceptional nor dastardly.  Some weeks, I don't have much to report because the days simply 'happen'.  So, let's see.  What happened to Willow's Week?

1.  On Sunday we needed to drop by Lowe's and the library, so we decided to make an afternoon of driving to Ventura.  North on Hwy 101 to California Street in Old Town Ventura. 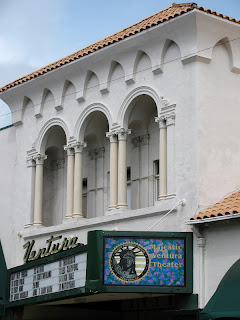 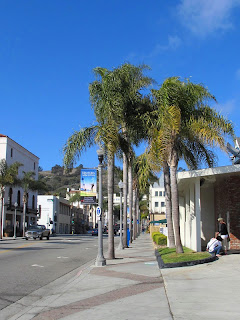 We lunched at Nature's Cafe and serendipitously found a pair of shoes for me next door.  After a 3 mile walk on The Promenade, 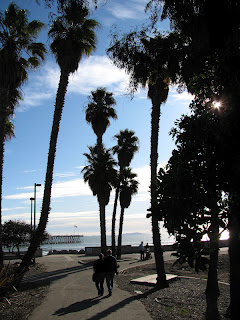 we finally made it to Lowe's to purchase some garden supplies and a new kitchen door knob to replace a broken one.  Exciting, huh?

2.  Phone calls with my brother.

3.  Visit with my sister-in-law.  We live in the same town and used to work in the same school and often saw each other seven days a week.  Now we're lucky to see each other once or twice a month.  So this week, I grabbed a couple of cups of coffee and headed to her house--just to chat for an hour.  We should do that more often--both the coffee and the chat.

5.  Bluster Bay Shuttle.  I need a shuttle to use with my loom.  I didn't have one.  Asking around, I discovered that a member of the spinning/weaving guild was selling a couple of hers.  So I bought one of these: I'm one step closer to actually weaving on my new-to-me loom.  Hopefully, by next week, I'll be able to report that I've wound some yarn on the new shuttle and used it to begin practice weaving.
This was my quiet week.  Even in the quiet, ho-hum weeks, there can be blessings and simple pleasures.  How was yours?﻿
I've linked my Friday Fave Fives to Susanne's blog Living to Tell the Story.
Posted by Willow at 10:29 PM

You had me swooning at "hours of reading"....

I've had some quiet me time this week as well! A nice lunch, a long walk, getting some errands done and a nice new pair of shoes? Not bad for a quiet day!

yay for hours of reading...i had that too yesterday on our first snow day of the school year! yes....NY finally got the white stuff....lol. My week was uneventful as well which made thinking about the blessings all that more special :) happy weekend to you!

Do you have bobbins for your shuttles? You might get your sweet husband to help you wind them. Wrap some masking tape around a drill bit till the bobbin slides on snugly. He holds the drill and makes it turn, you feed the yarn on in neat, symmetrical fashion. Zipedy doo dah! Bobbins wound in no time!

Always available if you have questions.

It's always a treat to see photos from my old haunts. It's good to have weeks like these.

Sounds like you had a great visit with your SIL.

I'm so glad that you mentioned the library because I need to go there today!

There is a song with the line "Ventura Boulevard" and it keeps going through my head now! (What is it??) This has been a week! My Dad turned 69, my good friend's brother had a heart attack but he's okay now (he's a priest in VA), the bulbs are starting to bloom so March came in like a lamb, and we have teenage boys coming tonight to hang out so I must go clean the house!

An occasional trip to the library AND Lowe's IS exciting!! ;)

That quiet reading time is rare, but SO wonderful!

I need some "hours of reading."

Hello Willow! "Dastardly", a marvelous word, always reminds me of Bullwinkle and Dudley Do-Right for some reason!

I'm glad you had a pleasant week, and look forward to hearing more about your loom.

Your posts are making me want to go and visit Ventura! I remember walking along that promonade when I was a child and I'd love to go back. I'll have to talk my husband in to a weekend away or something.

Hours of reading are wonderful, that's my usual Sunday afternoon thing. I need the quiet.

I love when someone shows up at my door with a cup of coffee and a visit in mind. I'm sure you really blessed you sis in law.

Mmm.. I would love a quiet week... and you got your shuttles, so that must mean you have working on getting your loom ready!

My week has been so UNquiet, I'm just getting to my FFF friends now! Of course, now that I'm so "linked in" to the world, it's only natural that I would have less time for pleasure. :)

I hope it has been another nice week for you, and I look forward to reading about it.
-Catherine.