It is already really warm here in south central Los Angeles at 9:30 am. My indoor thermometer reads 82 degrees. So in an effort to escape in mind at least from the heat, I looked through my photos from England--again. It is much cooler in England. 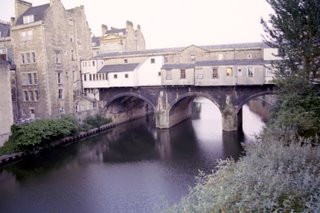 Bridge over the River Avon in Bath. We had just finished a walking tour of Bath in the early evening and were strolling back to our B&B along the river bank. 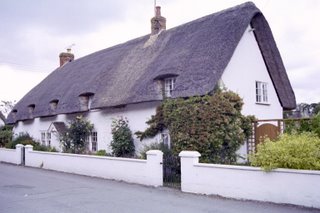 There is much more than stone circles in Avebury. Here is a lovely shot of a thatched roofed cottage. Now this is my dream home--well, one of them. I would name it--of course--Willow Cottage. Why Willow? When we lived in Oregon, I was involved in a camping ministry called Oregon Camp Cherith. All staff had bird names and I chose the willow finch--hence, Willow--and the name has stuck. I named my knitting business Willow's Cottage. 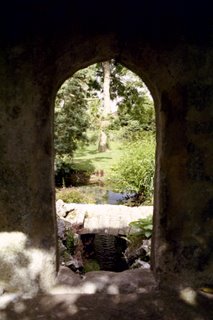 I love doors. This is actually an archway in a wall in the garden of the Wells Cathedral. The arch is framing the spring/well after which Wells is named.

I should comment on the company we had the past two days. The McCune family, currently from Odessa, Ukraine, visited Southern California and we provided housing for them. We are long time friends from early TEAM days when they were assigned to Irian Jaya but never received visas to get into the country. We had not met any of their children so it was very nice to get acquainted with them and renew our friendship with the parents.