Several years ago, in one of those 'chance' meetings during a walking tour of Pasadena, I was introduced to a woman who eventually became one of my closest friends while I was living in the city of Los Angeles. We had coffee together weekly, hung out in various places, went to the Long Beach Farmers Market on Friday mornings during my vacation times.


This friend who I shall call D has an interesting summer job. She volunteers at The Kilns, C.S. Lewis's home near Oxford, where she cooks and cleans for the various summer guests who attend lectures sponsored by the Lewis Foundation.


We had often said that if we were ever both in England at the same time, we would meet at The Kilns and sit in Lewis's sitting room and walk Shotover Hill, one of Lewis's favorite daily walks.


Last month our dream came true! D and I overlapped in Oxford for less than twenty-four hours, but we made sure we met at The Kilns during that one day we were both there.


The Professor, Chaplain Dan, The Princess and I took the bus from Oxford to Headington and disembarked near Lewis Close. We walked to the cul-de-sac (close in British English) and found the last house on the right at the end. 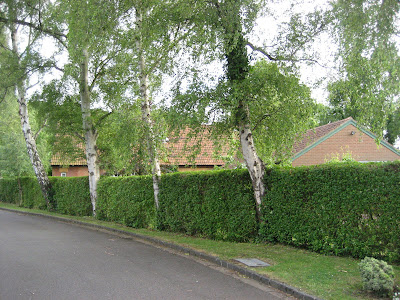 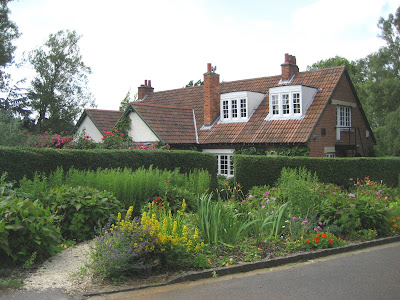 D and I met like long lost friends, talking our usual mile-a-minute, hugging and smiling. She escorted us through the house, showing us all the rooms and telling us stories of her summers living in this most famous place of the Wardrobe and Tales of Narnia.

A small bronze statue of Aslan rests on a table near the front window in the sitting room. 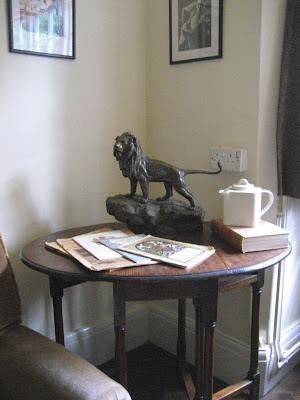 On a desk in the sitting room there is a photo of Lewis. But wait! What are those two stuffed animals doing there?? Do you recognize that little white bunny on the left? That's Eleanor Elizabeth Rabbit, better known as Bunny*. She was created by me on the airplane trip from Los Angeles to Gatwick. Her new friend is Little Brown Bear, the traveling companion of one of D's summer coworkers. 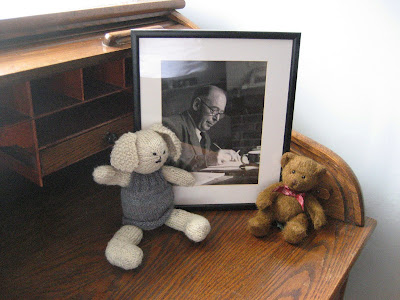 Bunny asked to have her photograph taken on the sitting room mantle with the map of Narnia just above her. The fresh roses were picked in The Kilns' garden. 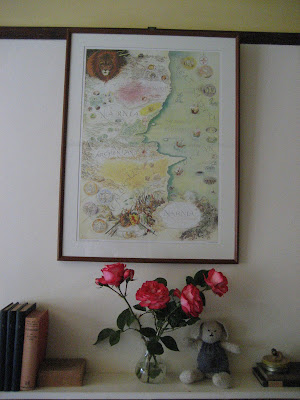 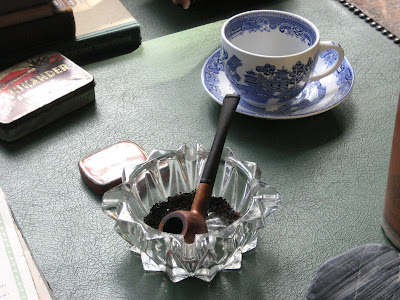 Lewis often sat at this desk in his upstairs room when he was writing. 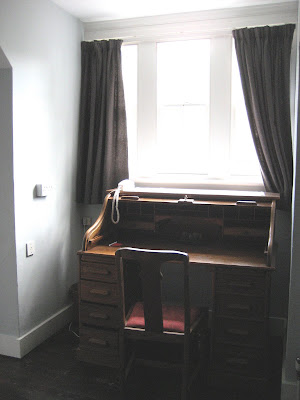 Bunny seemed to be quite taken with the fireplaces and mantles at The Kilns. Here she is, sitting above the brick fireplace in the upstairs bedroom. 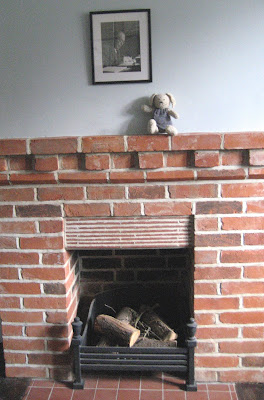 The attic was as close and dark as the imaginary one in The Lion, The Witch and The Wardrobe. 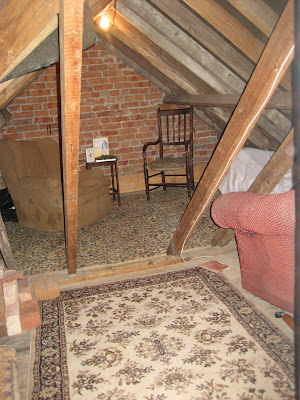 Back down in the kitchen, we paused to be introduced to the Oxford graduate students who had been living in residence at The Kilns this past year. They were chatting with friends as they made tea. We opted to have water because it was a warm day and we had already walked up Shotover Hill. The kitchen window faces the front of the house and the lovely view into the front garden. 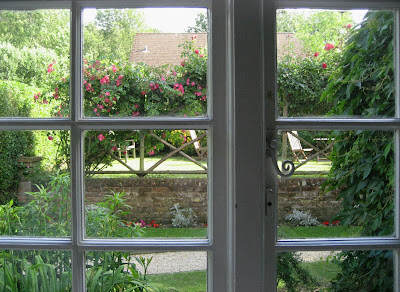 Just to prove to ourselves that we really were there in the home of the man who wrote the seven books of the Chronicles of Narnia, Screwtape Letters, Surprised By Joy, A Grief Observed and many other wonderful volumes, we had our photos taken. 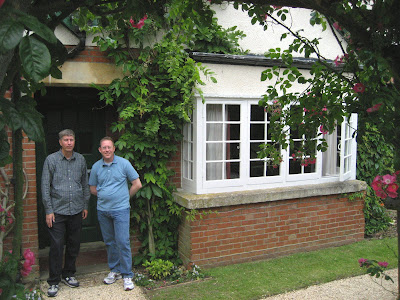 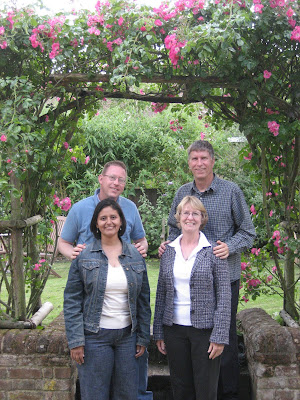 Our afternoon at The Kilns is one none of us will ever forget. For me, it was the fulfillment of a dream I shared with my friend D! 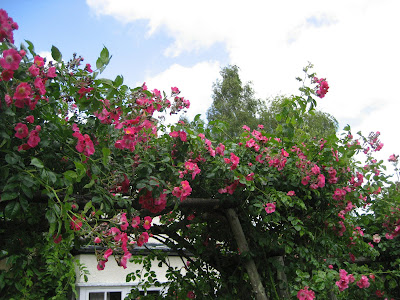 *You will be hearing more about Bunny's adventures in England in the future. She went everywhere with us, traveling in the front section of our daypack, her little face and floppy ears sticking out the top, and had her photo taken much more often than we did.

Bunny was made from a pattern I bought at fuzzymitten.com and adapted a bit to suit my fancy.

What a wonderful, wonderful experience. Back when I was just trying to accumulate units, I took a class on Lewis and Tolkien with a good friend. It was more work than we'd planned on, but so interesting. That friend was in Oxford last summer visiting her daughter whose husband was working on his Master's degree at Oxford. I don't think she visited the Kilns though. I'll have to ask her.

Such a splendid, once-in-a-lifetime experience...So glad you got to see The Kilms, Willow! DH & I are Lewis and Tolkien fans...so I can imagine you delight. Thank you so much for sharing this with us! Happy Days ((HUGS)) Oh, stop by when you can--I'm having some gift giveaway fun at my place this week :o)

What an incredible experience - thank you for sharing it! I grew up reading the Narnia series and as an adult have appreciated his other work.

Willow! How fabulous is that! I love the timing of it all. God is good. The photos are all so great. Bunny really is doing a good job getting around. Looking forward to seeing more of her adventures...

Bunny warms and humanizes all those photos and adds SUCH an appealing touch! What a splendid experience. Yay for you!

That was fun - thanks Willow! It's definitely a "must do" on my next trip to England.

How lovely to have this precious time with your good friend. Seems like a magical place to meet. Bunny seemed to enjoy it immensely :-) The gardens look deliciously fresh.

So lovely! When you were in Pasadena, did you ever have tea at any of the sweet shops there? I love the bronze statue of Aslan, by the way. Enjoyed the day with you vicariously here, Laurie

..just soaking in your adventure...and smiling!! I'm so glad that you have had this time to enjoy your family, the Kilns and a good friend!
Bunny is something very special!!

Your pics allow us to imagine Lewis sitting, thinking, reflecting as he created his masterpieces. Last year we went to Prince Edward Island and I was thrilled to visit Green Gables, the setting for the classic book written by Lucy Montgomery. I could just imagine her sitting and writing. As always I enjoyed my visit.

I have a little something for you at my blog. I'm living the link with my name...

How utterly special- thank you so much for sharing it. Shotover was my favourite walking place too when I lived in Oxford. I'd get up very early and just breathe the place in. I read somewhere that the original London road went across the top but due to highway men robbing travellers, a new road that skirted the forest was built. I haven't checked that out for myself though. I also read that historically Headington Quarry had a rough reputation. Elizabeth I hunted in Shotover too I think.
Thank you so much for sharing The Kilns. It looks like such a peaceful happy place. The rose could be Handel.

Oh, wow. What an amazing experience. I have always loved those books, and I can only imagine what a thrill it must have been to visit the place where they were written!

What a great post. How wonderful that you were able to catch up woth an old friend but also to see such a amospheric place. The attic really brought the books to mind. Bunny pics just adorable. Enjoy the rest of your trip.

What a wonderful friend and a wonderful get-together. These are the most special and memorable times of our lives aren't they??

Wow! what a special visit and bunny looks very cute, thank you for sharing it with us. Jane x

What a lovely place.

Hello Willow..... I did enjoy reading this post..... what a precious time you spent with your friend D discovering this amazing place. Bunny too, lovely to see him... a well travelled little guy. Great pictures and a great experience I’ve enjoyed sharing. Marion

Mums, this post is so fantastic! I love all the pictures of the Kilns and can't wait to go there myself! Miss you!

That is unbelievable! I got goosebumps reading about you being there! I always wonder what inspired these wonderful stories. Thanks so much for sharing the photos! And what a great trip for you, to connect with your good friend!

What a unique fabulous experience! It must have been so wonderful. You have such great pictures. Little bunny is one lucky bunny. Thanks for sharing. I always love your blog.

What a wonderful opportunity and experience.. it must have been wonderful to walk through CS Lewis' house. . it looked wonderful. I love how bunny experienced all the different little niches to tuck herself into.
So glad your dream came true.

Thank you for this delightful look into CS Lewis' home in Oxford! I enjoyed it so much.

You have a beautiful blog and I'll visit again soon!

What a wonderful opportunity to do this! Thanks for sharing all of this.

I loved visiting the Kilns through your lens and words. For some reason I'd pictured CS Lewis's house as being rather dark with rather stuffy rooms and few windows, but the pictures show it to be a home full of spaciousness and light. His books are so full of light, clarity of thought and hope that I shouldn't be surprised his home reflects well the manner of man.

What a special time to be shared with good friends.

What an amazing dream come true for you, Willow.
I can't have imagined the meaning behind all those pictures and you must have been in cloud nine.
We need to keep dreaming and realize that some dreams are obtainable.

Hi Willow! Im a chinese Lewis' fans. May I post your pictures on a Narnia chinese forum?

I am looking forward to your reply =D!