Balboa Park in San Diego, California is amazing. It has a park, a garden, a museum, a zoo, historical buildings, all located in one place. The area was dedicated in the Nineteenth Century as a park, and in 1915-1916 it was the location of the Panama-California Exposition (first World's Fair). The California Dome (which houses the Museum of Man) was erected for the exposition. 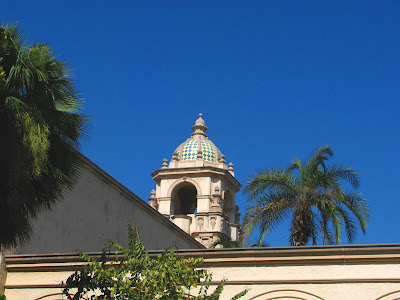 The architecture of the park's buildings reminded me of Stanford University. When I mentioned this to The Professor, he commented that both 'campuses' were built in the same era so it is not surprising that they would be similar in style. 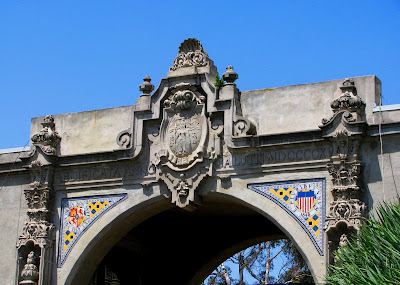 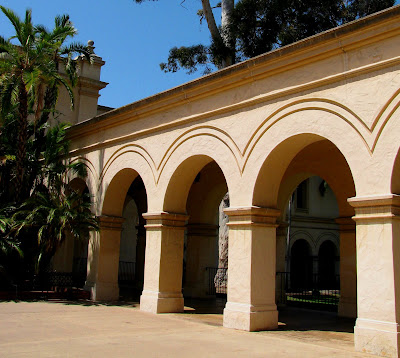 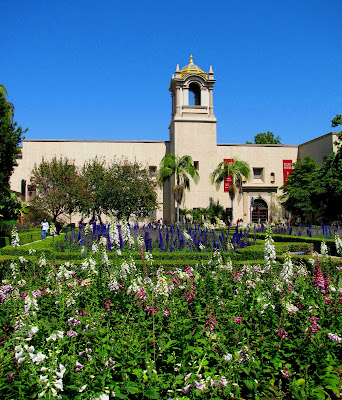 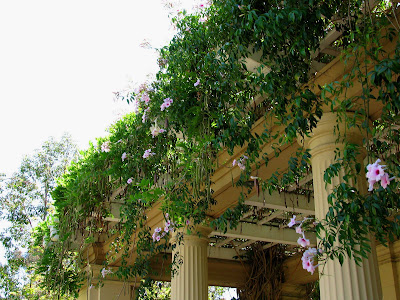 We passed the Botanical Garden on our way to visit the Museum of Man. We misread the sign as 'fee entry' instead of 'free entry' so we did not go in until just before closing time at 4pm when we walked by again and correctly read the sign. We did a really quick tour of the building and promised ourselves we'd return when we had more time. 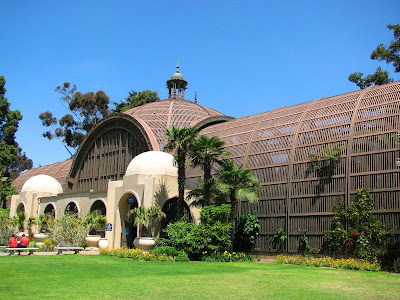 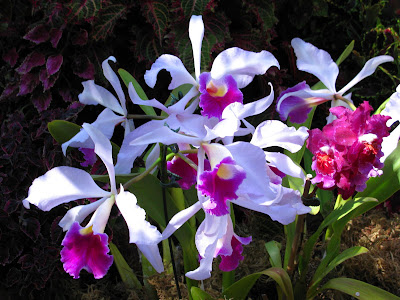 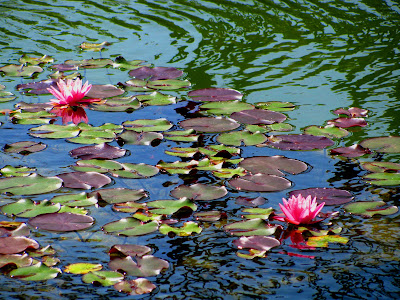 There are 35 of these little 'houses' in the International Houses Park, each one featuring a country of the world. They are open only on Sundays, so we were not able to do more than walk around and peek in the windows. 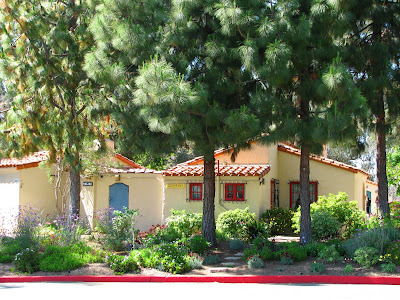 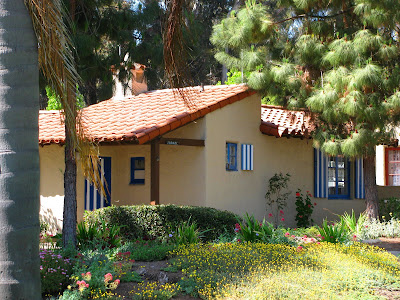 Thirteen museums, a replica of The Old Globe theatre, Casa del Prado theater (MamaMia said she saw the Nutcracker there last December), many parks, walking trails, and gardens!
There is just so very much to see at Balboa Park! You can click on the link and read more about this incredible park in the middle of San Diego.
I think the next time we go to visit MamaMia, we will need at least a week in San Diego to explore the 1,200 acres of Balboa Park. The Professor says we can buy a pass that allows us to visit all thirteen museums in a seven day period. And for a little more we can get passes to the San Diego Zoo, too. Two museums a day for seven days, he says... 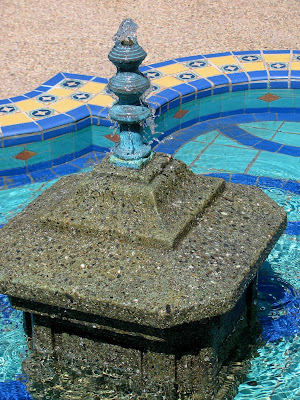 Beautiful photos, Willow. One of these days I have got to get to California. Some friends of mine just returned from a wonderful vacation around Carmel, Big Sur, etc.

As I said in a previous post of yours, this is a beautiful place. Thanks for sharing these wonderful pictures and the story. Excellent :)

I love the one with the pond and water lilies!! Beautiful! And a whole week at Balboa... mmmm.... :o)

These are gorgeous photos.
Cheers!

I'm thinking it's still a deal if you only visit say 7 of the museums and then just wander about the flowers :0)
Love all the beautiful photos Willow.

What a wonderful visual tour of the park! It is truly a fabulous place -- I don't think we've seen a quarter of what there is to see there yet, as we tend to gravitate to our old favorites (the zoo being one). Little by little... :)

It's been several years since I've been to Balboa Park, as we no longer live in CA (used to live in Hemet). It seems a bit like having Central Park in the middle of NYC. San Diego is such a beautiful city and lovely to wander around in. Love Coronado Island, too. Don't overlook the Wild Animal Park. It's out a ways, but we liked that the best and ended up with annual passes. It is so neat to see the animals in their natural habitat, and if at all possible, take the train ride after dark. It's the best!
Thank you for letting me see the Park and San Diego again through your eyes. :-)

You have caught some really fine pics of the park! The pond and water would be a challenge (for me) to paint but maybe something to consider! :) The blue of the fountain is beautiful!

What a wonderful place. I love the waterlilies.

Thank you for sharing.

Balboa Park looks like a wonderful place to visit! Lovely photos of the botanical garden.

I love San Diego and if you are there for a week you ought to put Sea World on your list!

Lovely photos and I would love to go to that Botanical garden. The place I live is called a Botanic Garden. Is that an orchid in one of the pictures..and I've given up on my water lilies..they never bloom. Happy week Kak Willow..hugs.

Congratulations on POTD. You have beautifully captured the colours of California and the Spanishness of the place.
Wonderful.

Congratulations on winning the post of the week with this.!!
Makes a lovely peep into a beautiful place, I wouldn't have seen otherwise.

I came over from David's - congratulations on your POTD! Lovely photos - esp of the water lilies!

I am flabbergasted. I think you might be the same "Willow" but the blog is so much different that even I am not sure. Anyway, congrats for being on authorblog...

Voices from the past > http://bing-it.blogspot.com/

These are absolutely gorgeous!!! And one of my favorite haunts, too!!! My husband and I picnicked there the weekend he proposed!!! You are an amazing photographer!!! Congrats on your POTD!! Couldn't have happened to a more deserving or lovely lady!!! ~Janine XO

What a gorgeous place - the blue fountain caught my eye in google reader and when I came over to leave a comment, I saw that you had made it into a banner - I should have guessed - you're a "blue" lover just like I am.

congrats on being the "post of the day" at David's...
i am amused by the misread between the "free entry" and "fee entry"... happens to all of us many times i guess...haahaa
by the way...nice pictures

Hi, I came over from authorblog. Lovely photos! Congrats on the Post of the Day Award!

congrats on the potd!

What a wonderful place to visit Willow, your photos of the plants/flowers are beautiful. A seven day pass sounds like heaven. Jane x

Stunning views, Willow...just marvelous photos! Thanks for taking us along...I've longed to see that famous park for real. So great to catch up with you here at last now we're just returned from our trip...Still a little jet lagged ;o) But good to be back and visiting friends. Happy weekend ahead ((HUGS))

Balboa Park is always a great place to visit. My grandfather was the man who raised the money to expand Balboa Park for usage during the Pan American Expo. My dad (born in 192) was a child then, and he and his sisters went to the Expo for free everyday. I love going there with Dad as he has lots of behind the scenes stories. It amuses me to still see remants of the roads of the world behind the space museum. Imagine wanting to take a car ride over cobblestones, wooden planks, dirt, shells etc as a "special" treat!

The little houses used to be my favorite thing to visit as a child. There were always food for free at each house...and I loved the House of Sweden foods the best!

Next San Diego visit I urge you to go up to Mt.Soledad to see the 360 degree view, and to explore the Veteran's Memorial. If you do go, remember that most of the faces you will see on the plaques are of people who are still alive...and you might just run into one of them and get to hear their story. LOVE it!

Ooop...that last comment was posted from my cat Tiggie's blog, instead of mine!

Darn cat...he is supposed to sign out when he is done!

Hi Willow ~ I am back from my much needed break. I truly missed all of my blogging friends though - very much. I loved looking at your posts and tried to catch up on all of your news. The colors in the San Diego photos are breath-taking, almost surreal. I love the picture with the lily pads. Safe travels.

Gorgeous photos Linda!!!! I must visit San Diego. must.

Hi Willow, I came by David's to say congrats on post of the day nomination.

Interesting to see the very different architecture. Just had a catch up as did not do much blogging while Sara was here,wonder why? Waterlily photo great.

Balboa park sure does bring back some good memories. Hope you're having a great day. Lovely pictures!
xo,
Linnea

Balboa Park was another of my favorite locations in San Diego. I love the reflecting pool in front of the conservatory. Speaking of which, the conservatory building is such an interesting style of architecture. Your photos are beautiful! Congratulations of being chosen blog of the day!