We are traveling.  We're on a road trip.  After a rather unusual weekend in which we attended a graduation in downtown Los Angeles, we returned home and I promptly had the rest of my weekend sidetracked by an allergic reaction to 'something' (if we knew what, I'd be sure to avoid it in the future), slept most of Sunday, and muddled through Monday.

But Tuesday was a new day.  We headed east (well, we can't head west much or we'll fall off the continent into the Pacific Ocean).

Tonight we will sleep in that wonderful town of Flagstaff.  Having arrived at almost dark, I didn't have any opportunity to take photos.  Maybe in the morning...

We drove through Ventura County and Los Angeles County and then entered the US's largest county by area-San Bernardino County.  As I said, we are headed east.  This first day we detoured a bit to drive along the famous Route 66. 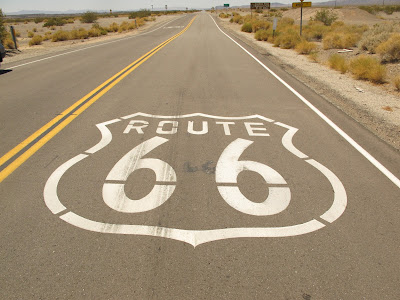 We have gone from 500 feet in elevation to 7,335 feet as we crossed the Arizona divide east of Williams.  We've passed avocado and citrus orchards, valleys of Joshua Tree cactus, ocotillo cactus, creosote bushes and drying tumbleweeds,  and beautiful mountains and mesas covered in pine tree forests.  Yes, all this in one day.  The change in vegetation is staggering. 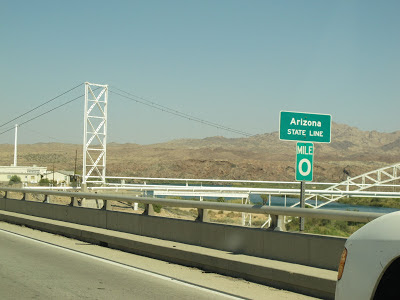 Amboy Crater is located south of a section of Old Route 66 between Needles and Barstow.  It was created by a volcano which has been extinct for several thousand years.  The erupting volcano left flows of basalt and an incredible mound which can be reached by an easy hike.  We opted out of the hike since we had a destination to reach by evening and because the temperature was a sweltering 103F. 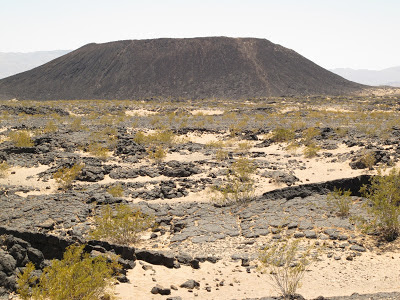 Tomorrow?  After breakfast with Son #1 and his lovely wife who drove up from Phoenix to meet us, on to points east!
Posted by Willow at 10:51 PM

Oh, have a splendid trip!

I love the photo of Route 66! What an adventure... have fun!

We love road trips like that. Have fun. You must have gone right past me in Ventura County.

Sorry about your allergic reaction to something...
Glad you are all better and on the road east. Have fun.

Have a wonderful time with your family...and I too love road trips.