Time for Friday's Fave Five with Susanne.  My week has been hectic and wonderful, filled with grandchildren making messes, making me laugh, making me remember how wise God was to give us children when we're young.

1.  Our daughter and the two little ones stayed the entire week with us.  What fun it has been to flex my grandma muscles.  One activity we had promised them was their Christmas present.  We had decided that instead of buying things for them, we would purchase an experience.  What more exciting adventure could there be than a train ride from our town to Santa Barbara. 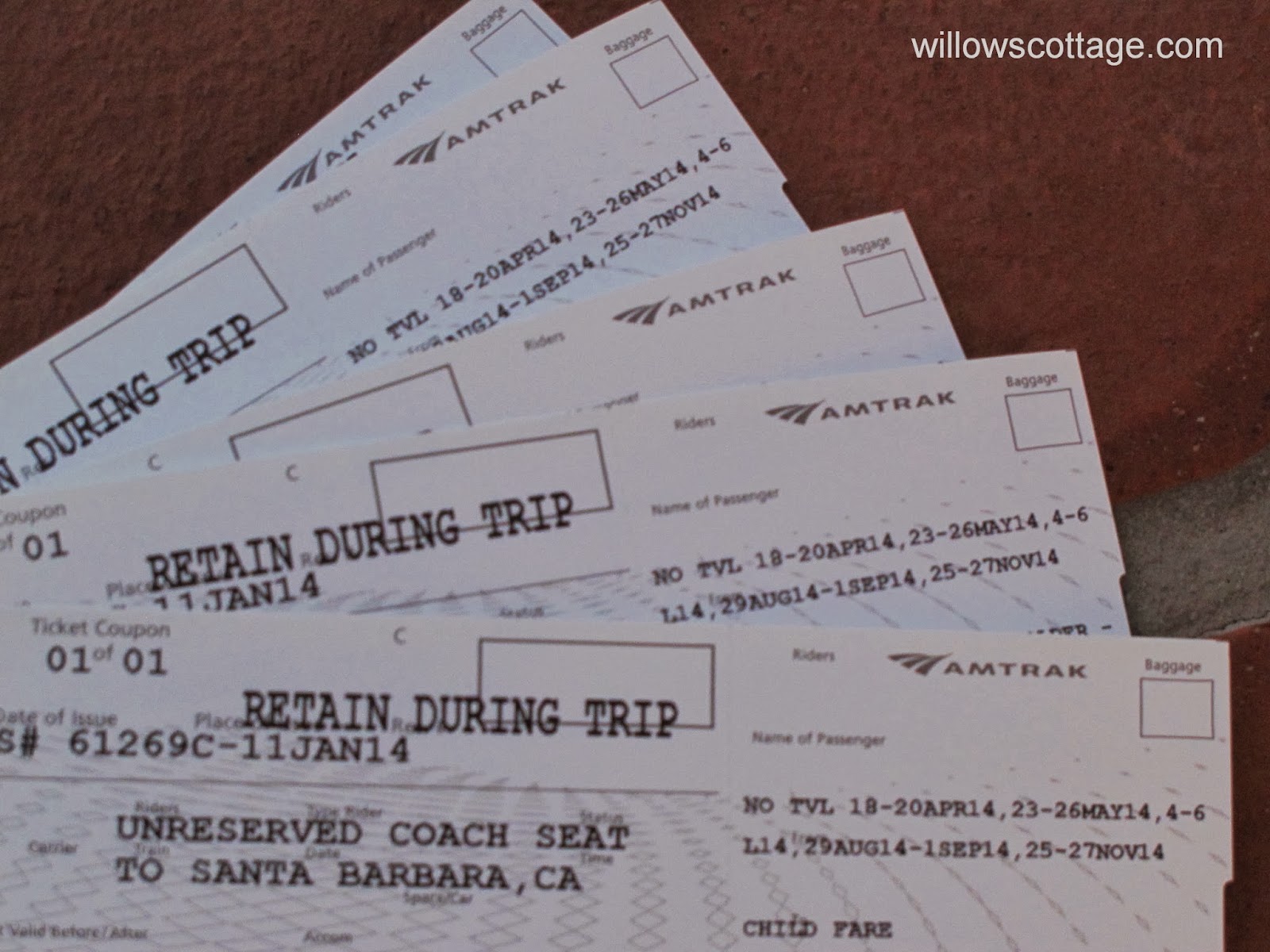 It involved just enough time on the train to keep it fun but not boring, several station stops and views of the Pacific Ocean and beaches which are world famous.  An added bonus was that The Professor's brother who is just as train crazy as The Professor came along. 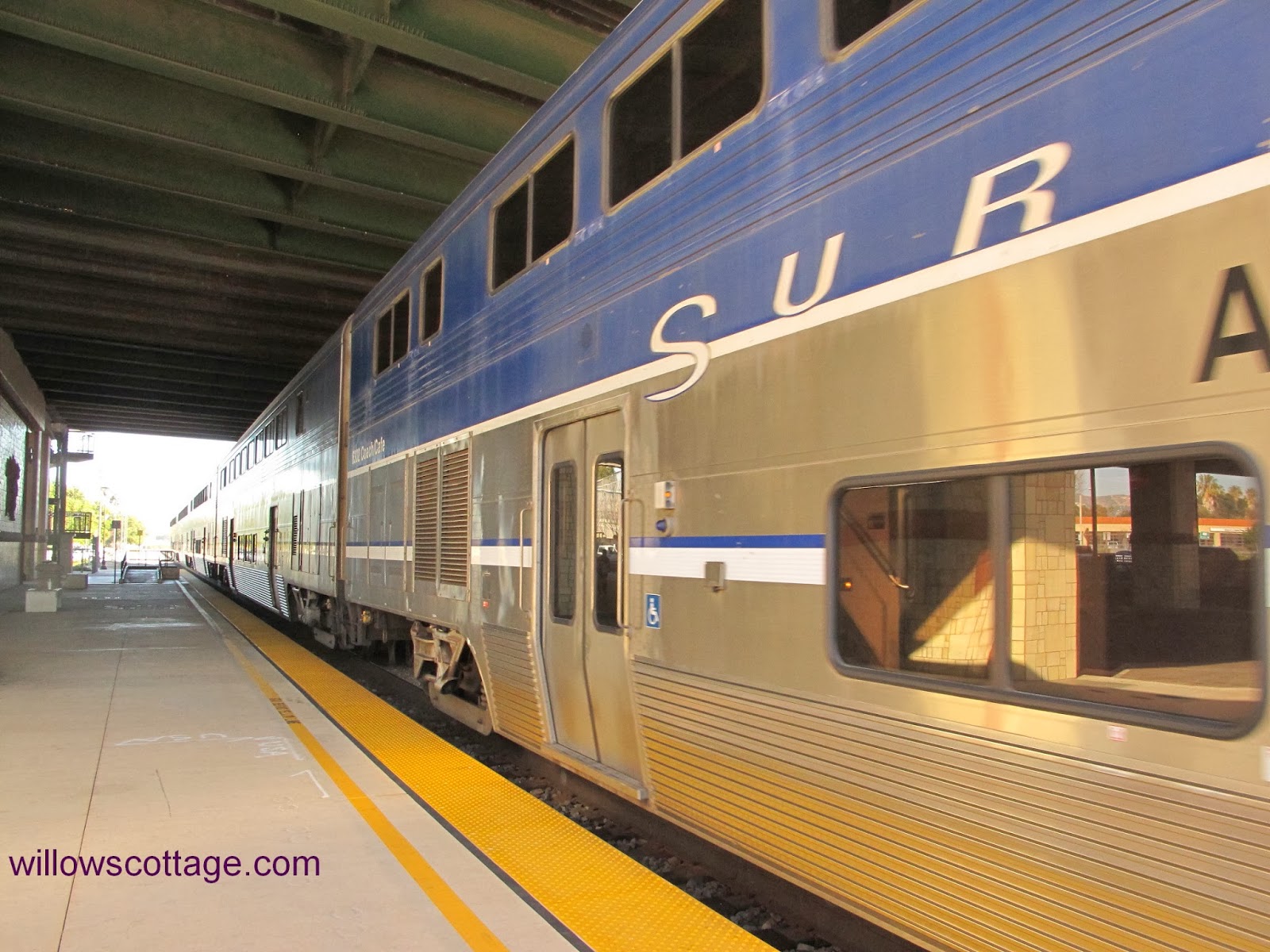 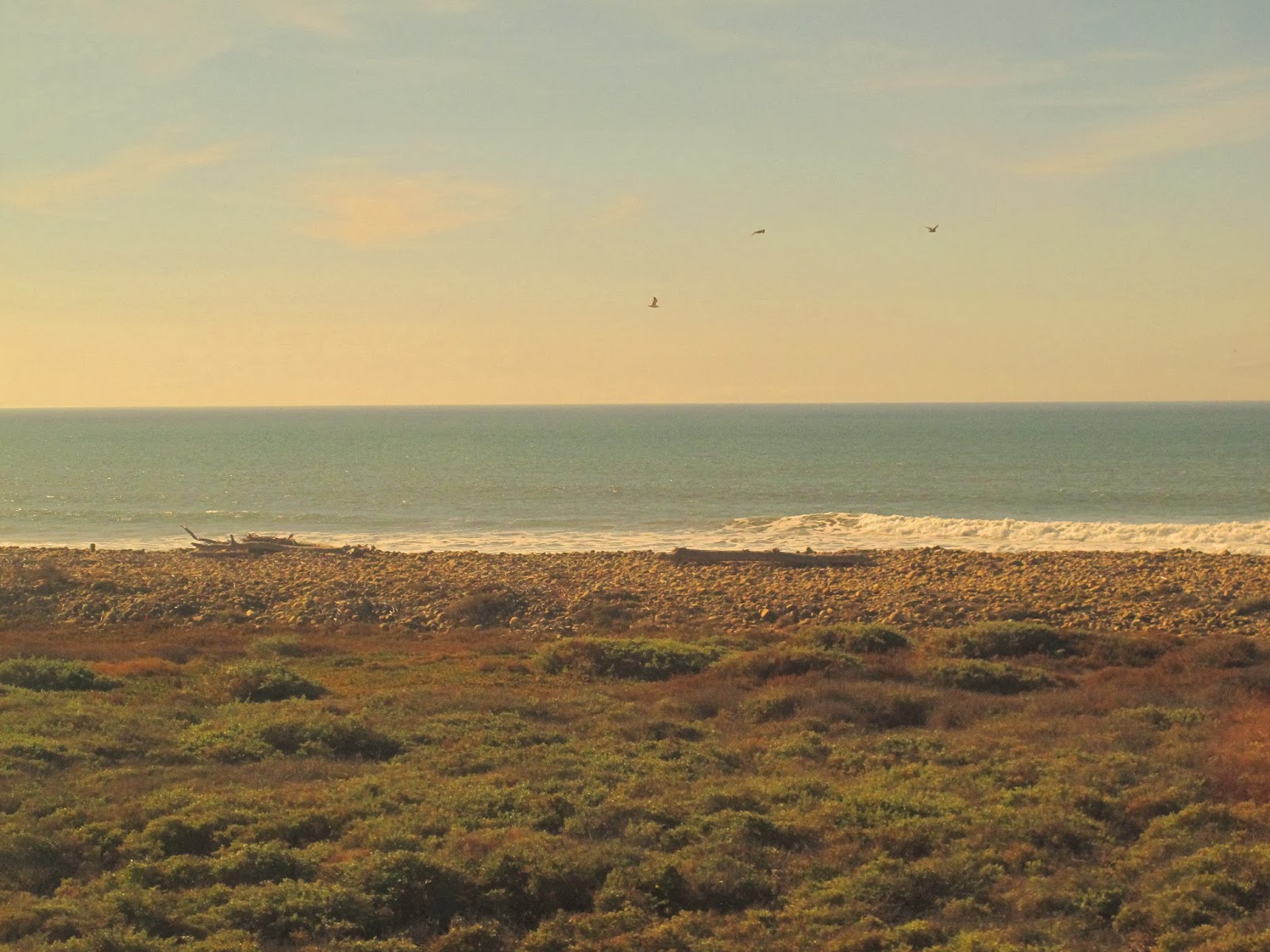 2.  Then on Sunday afternoon we enjoyed a lunch and visit with four of the five siblings in The Professor's family.  Having almost all of them in the same place at the same time is an unusual event which doesn't happen often since one sibling lives in the midwest.  Mostly, I just sat and listened.

3.  Our local community healthcare district sponsored an evening of cooking with Chef AJ.  I was fortunate enough to sign up early and scored TWO reservations for this culinary class, one for me and one for Younger Daughter.  I gotta tell you, not only did I learn some great new ideas for cooking unprocessed plant based whole foods, I found Chef AJ to be a hilarious and highly entertaining speaker. 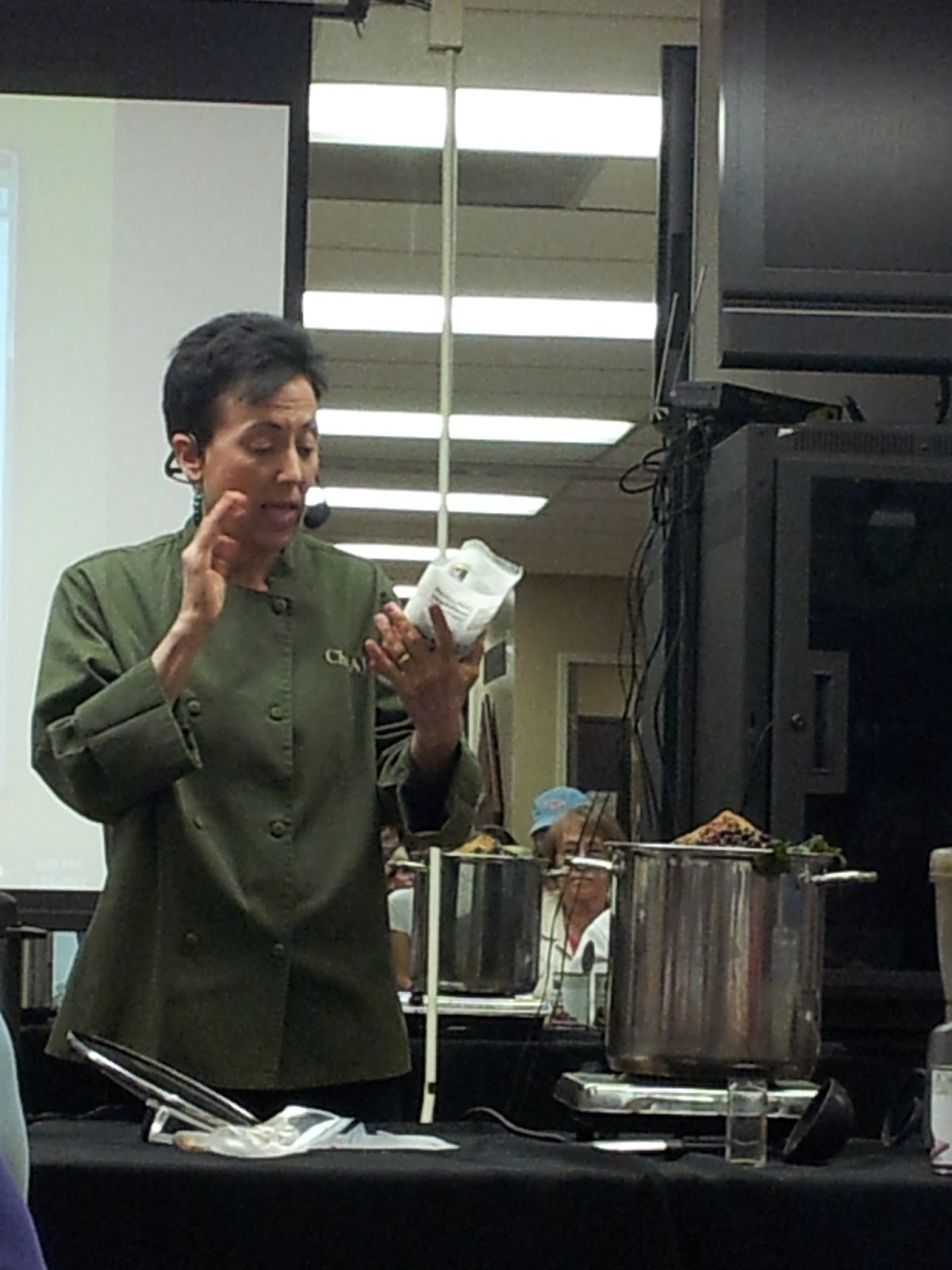 (photo taken by Younger Daughter on her cell phone)

4.  One afternoon we decided that the Little Ones needed a good run outside to expand some of their boundless energy. Their favorite place to play is the beach, so off we went to the same spot we enjoyed last week--the pirate ship playground. beach in Ventura. The weather was perfect, and the sun was shining.  I had compositions to correct, so I dragged them along.  I've decided that the best place to do my grading is the beach.  I might just make this a weekly event--sitting on a beach blanket correcting papers while watching the waves roll in, and the seagulls stand guard, and the sandpipers scurry along the shore's edge. 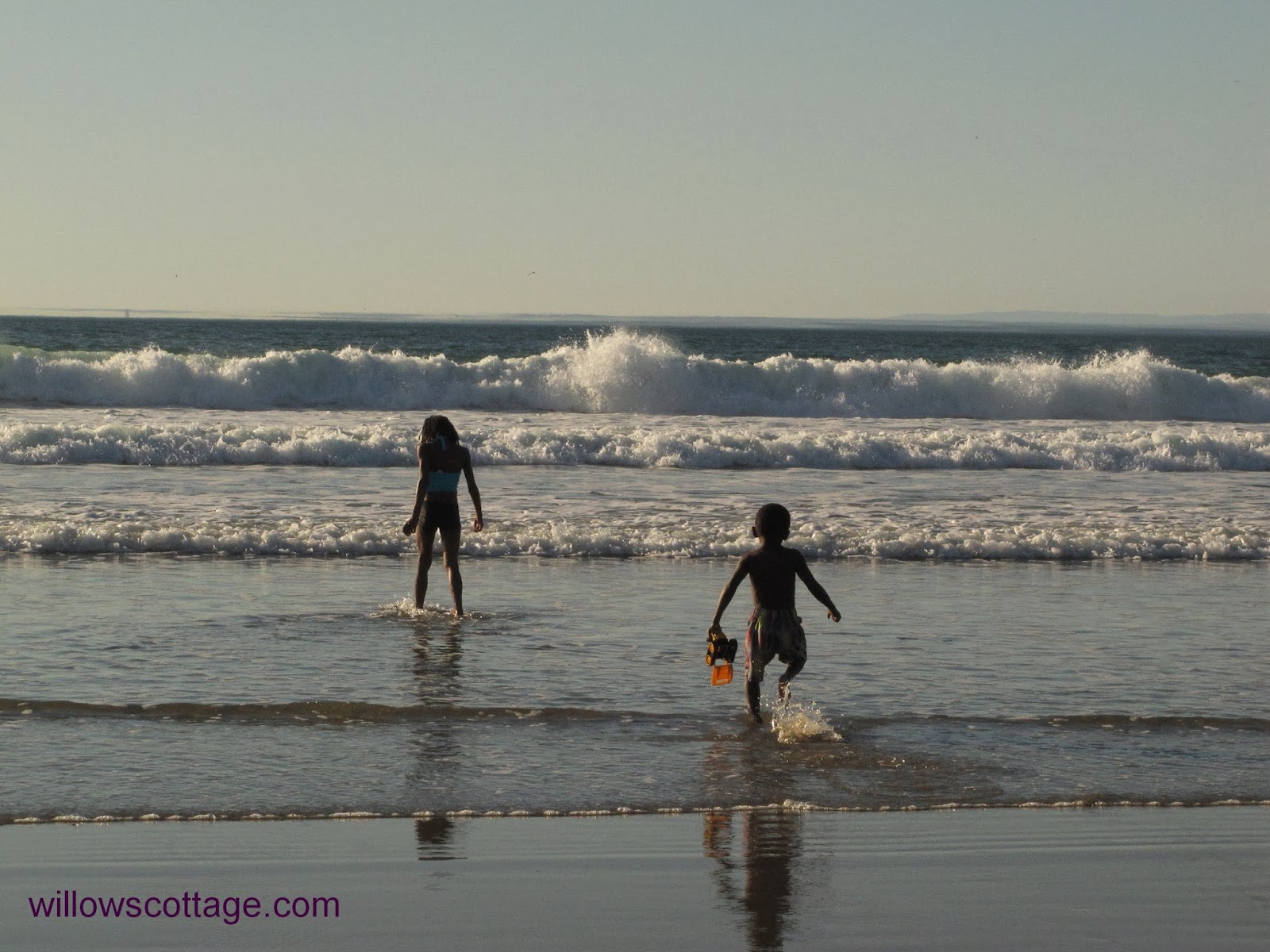 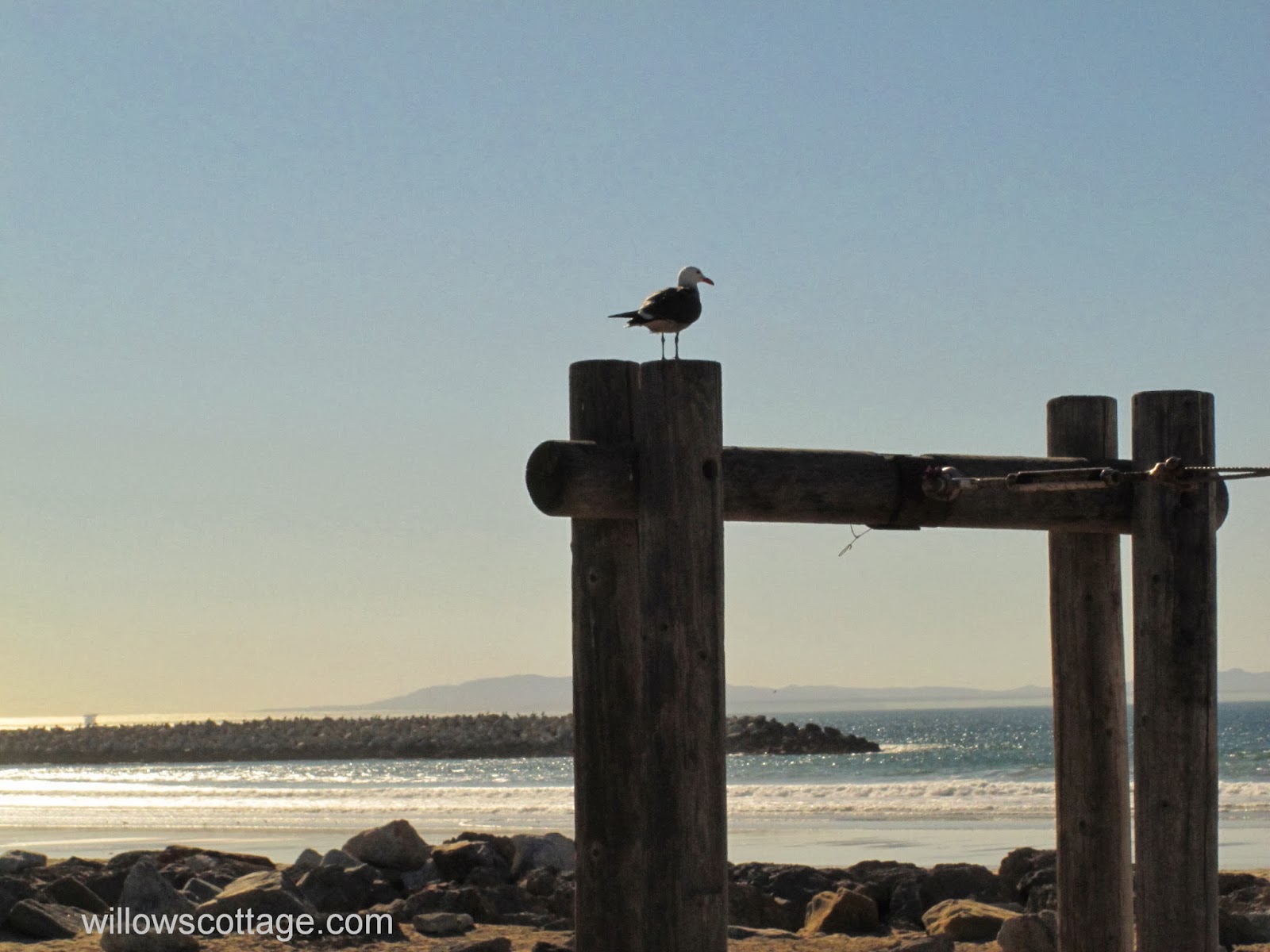 5.  To top off the week, I decided at the last minute (truly in the last hour) to grab a suitcase and some knitting (and compositions) and hop in the car with The Littles and their mommy and head back to San Diego with them.  I don't have responsibilities at home for the next five days and I can spend that time helping my daughter organize, declutter and pack for their cross country move (compliments of the US Marine Corps).  As The Professor says, I do love to declutter and organize other people's stuff.  And as a friend commented on facebook this week, the drive from Ventura County to San Diego is one of the most scenic car trips one can imagine.  I agree.  Here is a photo I snapped from the car at sunset as we passed San Onofre Beach--so amazingly beautiful--it makes me misty-eyed. 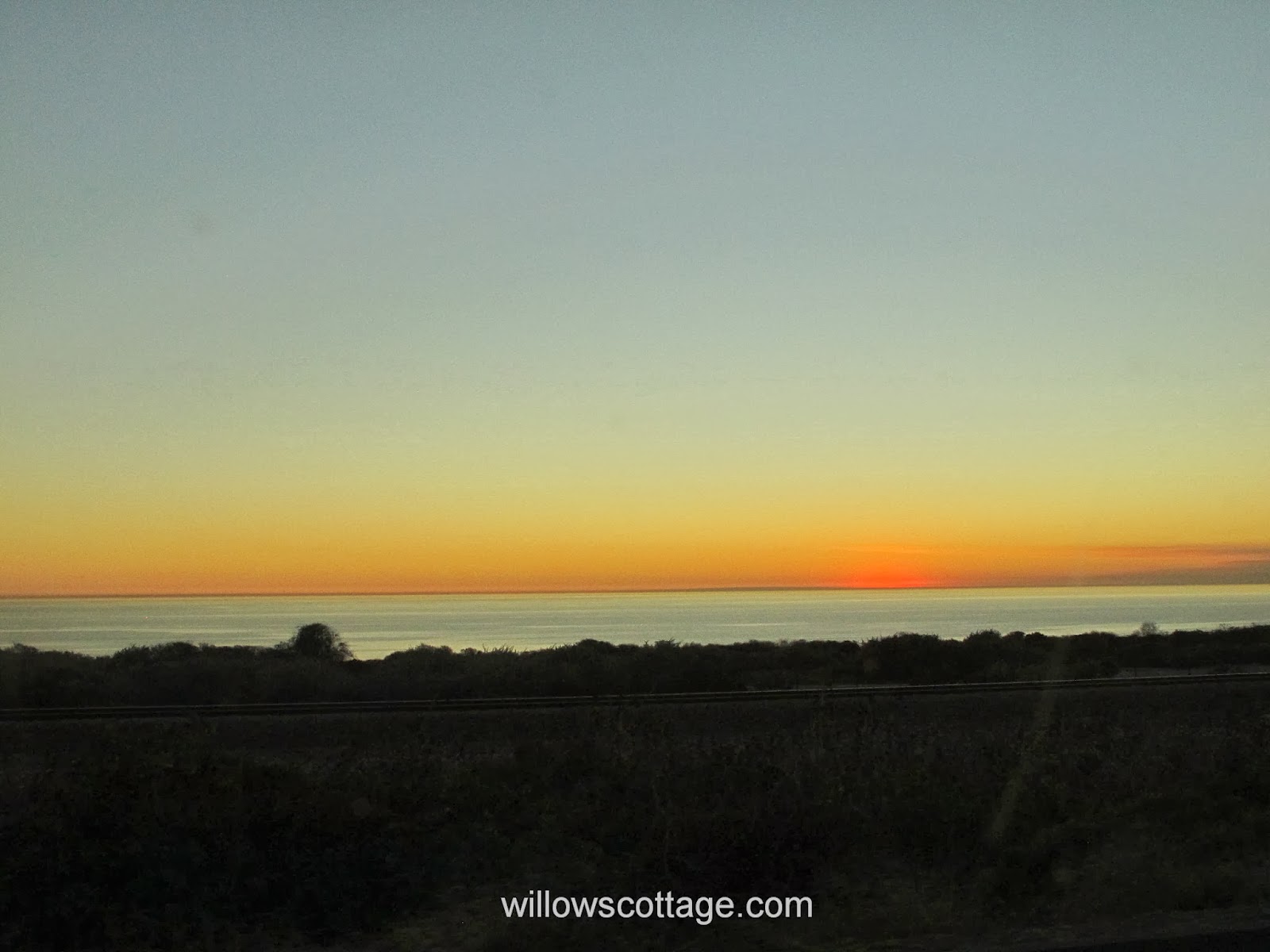 Looking back, I realize that Willow's Week has been about family and beaches.  How was your week?
Posted by Willow at 11:34 PM

Nice week you had and how lucky you are to spend some time on the beach ! It's far too cold for that here !

Family, food and beaches... oh, sooo good! :o) It's been snowing every day here this week--so that's been a top focus we keep shoveled out and warm... LOL! ((HUGS))

Such a wonderful week! Mary

Hi Willow!
I love that you 'bought' you're grand babies an experience! Memories are all that we really own. Time with family is always precious and near and at the beach - priceless! my kind of fun.
Happy New Year!
p.s. and I love that drive to San Diego! it is beautiful!!

What a beautiful week! To be on the beach like that would be so wonderful right now. The train ride was a great idea! What a way to spend time with The Littles! Very creative.

Enjoyed the scenery very much!

How fun to have the grandkids there for a week! I'll have to remember that about providing experiences and not just things. The train ride sounds so fun.

Some time on the beach sounds heavenly just now.

How neat to be able to go help your daughter get ready to move, and what gorgeous views.

Your week sounded real good. I'm glad you are getting some added time in with them before they head east! Loved all the photos.

What wonderful topics - families and beaches! I love them both. Plus I love train rides and decluttering. In fact, I'd say you had just about the most perfect week!

You described your composition correction setting so well that I was "there" with you. Happy sigh. Yes - do it every week! And take pictures and I'll enjoy it from my ice-bound Island!

You have a blessed daughter and you're a wonderful mom to go along to help declutter and pack. It sounds like fun to me too.

A trip with train crazies? Definitely not boring! And a great gift of family time. Surely that impromptu gift of help was also appreciated.

What a great adventuresome week you had. You can come and declutter and organize me anytime. We have some pretty nice scenery around here too you might enjoy! :)

foYou are making me miss the beach before I'm even gone. (Although I live inland). Sounds like a grand idea to "buy an experience". Those are the very best presents!

I hope that I'm always as close to my kids as you are! I know you know that you're very lucky to be able to spend time at the beach! We got more snow this week and this is about the time of year when it starts to get old. Your photos of the landscapes are beautiful. And the train sounds like a lot of fun too!

How lovely for you and your grandchildren to be able to spend a week together. These times (and resulting memories) will definitely shape your relationships.

How fun to be able to gather with almost all the Professor's siblings. I only have 2 kiddos and it is hard for us three to coordinate our schedule for visits. I can't imagine coordinating FIVE schedules.

Thanks for the reminder about experiences versus things. It is motivating me to put together that "Experience" book I've been meaning to get to.

Have a great time decluttering and loving on your daughter and her family.

What a blessing to have the opportunity to make memories with your family! Your beach pictures are just lovely. Have a wonderful time at your daughter's house. :-)

I'm glad you have been having fun with two of your grandchildren this week! I know how busy two little boys can keep you -- when mine are over it's a whirlwind of noise and activity..lol The train ride was a fabulous idea and the beach looked so nice and warm.
Loved the sunset photo at San Onofre Beach!

The kiddos loved the train ride- thanks! So much, L thanked God for it again last night at bed time. :o) And amazing you were able to capture that lovely picture over San Onofre!