After writing a bit on Friday about jacaranda trees, I have been noticing them everywhere.  They're in the Trader Joe's parking lot.  They are growing along the freeway.  Obviously they have been planted in the dead spaces at the on and off ramps on The 101.  I've noticed those gorgeous towering blooming branches in the neighborhoods next to mine, along the avenues, and at the doctor's office. 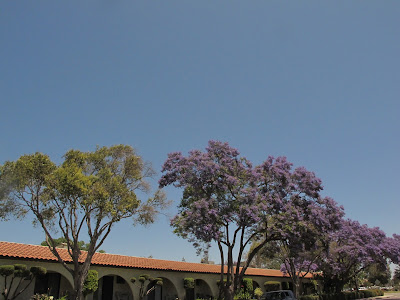 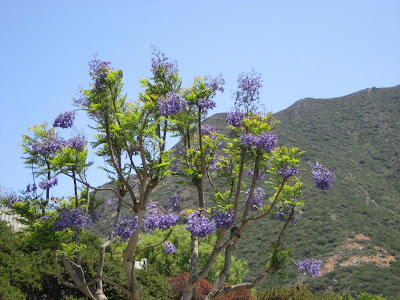 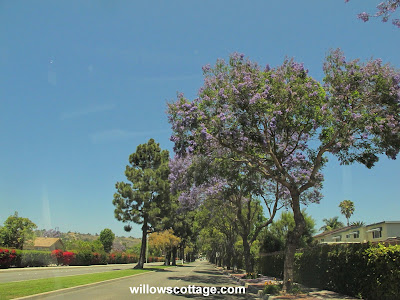 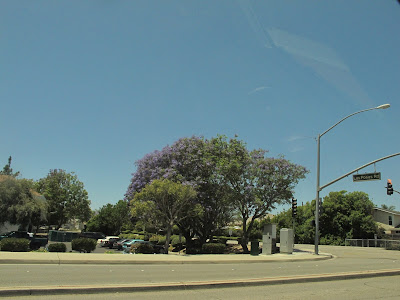 We moved to Southern California in February 2002.  That first spring I saw purple trees.   In that grey cement and black asphalt wasteland which is called Los Angeles, all of a sudden, there was purple.  Purple everywhere.  Magnificent purple trees lined the streets.  Then the blossoms dropped all over the grey and black and transformed it into a fairyland of lavender pathways.  As suddenly as the purple appeared, it disappeared.  I forgot about them.
The next spring, those invisible trees bloomed again and everyone exclaimed about the 'jacaranda trees blooming'.  It seems that when the jacarandas bloom, it's a rite of passage from winter to true spring.  I assumed that 'jacaranda' was a Spanish word for a Spanish or Mexican tree and was pronounced 'haw-ca-rawnda'.  But, no.  The name originated from the Guarani language (in South America) and is pronounced 'jack-a-randa'. 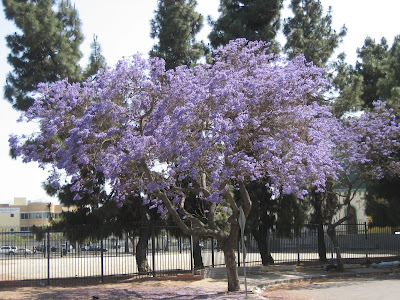 Evidently, people either love them or hate them.  They're big.  They're bossy and like to take over.  See those huge pods hanging down in bunches?  It turns out that they're messy, too. 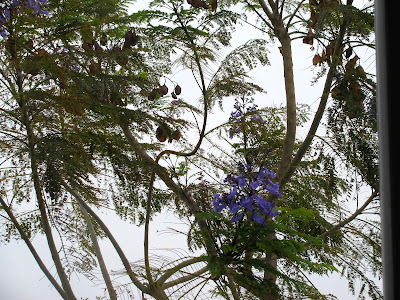 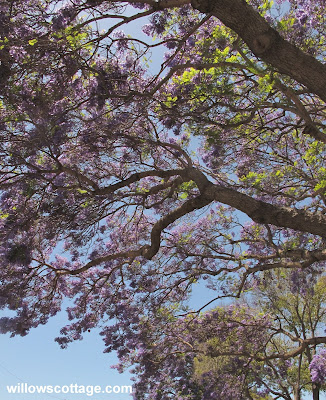 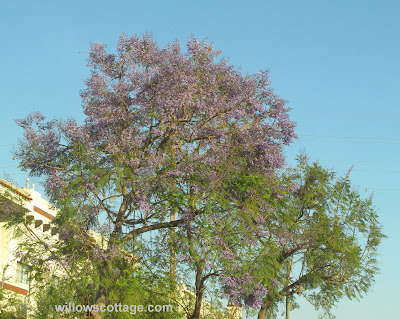 Since I don't have to clean up after their messy throw-everything-on-the-ground-when-they're-done-with-it ways and I don't have to hack-saw them down, I love them.
Posted by Willow at 7:57 PM

They are quite a sight but I've also seen how messy all those pods are!

I agree with you Willow, Since I don't have to clean up after them I love them. They are beautiful. Thanks for sharing them. I've never seen the like before.

Thanks for this good post, Willow. I enjoyed it! When I have seen the pretty purple trees in CA, I thought I was seeing Crepe Myrtle. Now I know better :) xx

I love them too Willow!!! My parents have a huge one in their front yard and it's glorious. Thanks for the background and where the name comes and you are right they seem to grow well everywhere - maybe we should plant one! Thank you so much for letting me know about the Banjo Festival this weekend - I had no idea that was going on. I told Steve about it and he would love to go and if we aren't too wiped out from the desert (we leave in the morning for a long weekend) we are coming over. I hope we can make it I would love to see you!!!!

There's a metro/bus station near my work where rows of pink flowering trees bloom in March only to give way to purple blooming jacarandas by the end of April. It's very pretty even in the pre-dawn when I'm usually driving by. But I do not envy the clean-up crew (shudder).

We have some here in Florida and I just love them, I know they can be a bit messy but who cares they are gorgeous,,
Meredith

Sooo incredibly beautiful! I've only ever seen jacaranda trees in pictures... What it must be like to see all the gorgeous purple for real... *swoon*... :) We have nothig like them here. Happy Days, Willow ((HUGS))