I have always been interested in my family's geneology. I know it's part of my personality. According to my Strength Finders index, Context is my strongest strength. I like to understand the background before I make any decision. Another of my top five strengths is Input--I just like to know things, interesting, important, or not. So, finding out about my family and its history is a natural interest for me.

My grandma's parents came from Germany. Otto Gericke worked his way across the Atlantic Ocean to the New World on a ship. I keep his seabag in my hope chest. 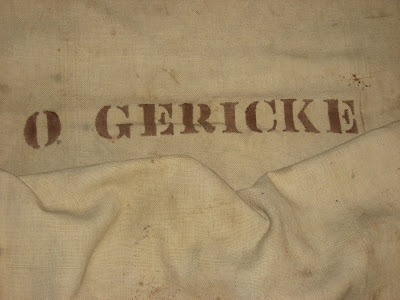 I also have his official papers and many letters that were sent to him, most of them written in German. 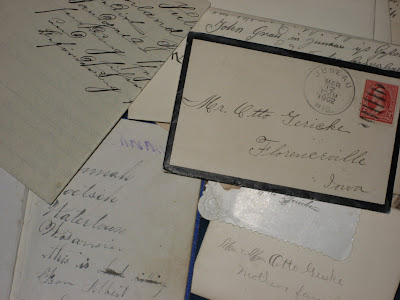 My great grandfather had a Chinese penpal who wrote to him in grammatically perfect English. This Chinese gentleman was a great admirer of Sun Yat Sen and in his letters he praised the Chinese leader's beliefs and personal life.
My great grandparents moved to Oregon in about 1925. They went to visit family there and loved it, saying the Willamette River Valley reminded them of Germany. They sold the farm in Iowa and my grandparents had no more home. So they followed her parents to Portland just in time to be plunged into the Great Depression with everyone else who needed jobs but couldn't find one because there weren't any. My great grandfather took an old shed and rebuilt it into a home for my grandparents and their four children so at least they had a place to live. That is my grandma's house of my childhood.
My mother, then, was a Portland girl, 100% German. My dad was a country boy from Coos County, Oregon, 100% English (I found an Irish ancestor in there, too). I am half German, half English, 99% American with a little Asian mixed from all the years we lived in Indonesia. The Professor is half Swedish, 25% English and 25% German. Our children are, therefore, 3/8 English (with that bit of Irish), 3/8 German and 1/4 Swedish. Blonde/light brown haired, blue eyed Americans with that Indonesian cultural core.

I sometimes wonder what Great Grandpa Gericke would think. I could show him the letters I've read and reread (at least the ones in English), his old sea bag, the old photos of his wife Alma and him, the ones wrapped in tissue, lying in the bottom of the hope chest where Chaplain Dan, Kiti, Mike and Mama Mia's baby books are stored, a connection between my children and him, their great, great grandfather. He'd probably say, "Ach, ja. Sehr gut."
Posted by Willow at 12:31 PM

I was adopted in the days when it was all kept a deep dark secret. I envy your roots.

I remember that, Roxie, and I would offer to share mine, if you wanted them. Is there a paper trail anywhere? Twins would have been more noticeable. I do recognize I am blessed.

And you know you have to translate that last thing your grandfather would have said. LOL

In the language of the 'hood: S'all good.

I'm so glad you came to visit Yahweh's Retreat! Come back and have a glass of tea while swinging on the front porch swing. :-) Then we can share stories. I love doing my genealogy and have found so much interesting information on my family. It is SO cool to plug them into history; really brings it to life.

What an interesting geneology. Quite something to have that info.
The Hope chest sounds special. I guess when one migrates it becomes even more important.
Two of my brothers emigrated to Australia in the 60's and we nevr saw them again.