Things are looking up a bit. The camera connection to my laptop is working again. I knew The Professor could work his magic on it. (He tells me that all he did was turn OFF my computer and turn it ON again. Now that's MAGIC! My computer turns OFF??)
So I get to show you the finished Weasley Sweater, knitted in BLUE. This sweater is for The Boy, of course. 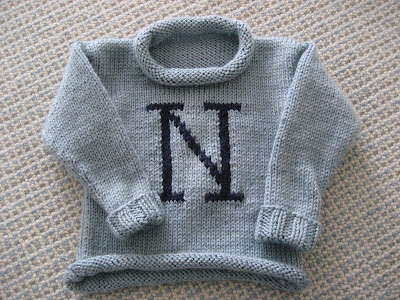 The pattern is from Enchanted Knits. 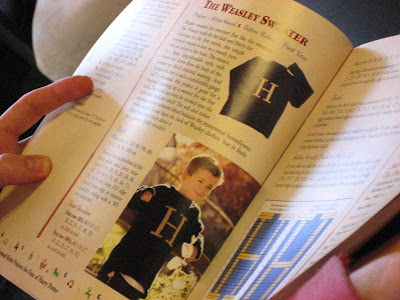 I'm still a little blue about still not having hot water. We've talked with the insurance people again and again and yet again...
BUT the back garden 'shoring up' work is done, and done beautifully. The six railroad ties are in place. The two men our friend's contractor sent over from the ranch worked hard, knew what they were doing, and finished in just four hours. Photos soon! We do not plan to put vegetables in that section of the garden so any leaching of creosote into the soil will not be a problem. Thanks, Doug, for mentioning that as I hadn't considered the possible issues with creosote.
I have to tell you a funny story about our attempts to comunicate with the workers who only spoke Spanish. We speak "espanol un poquito." So I pulled out my cell phone and called my friend in LA who speaks Spanish and asked her to translate. I refer to her as 'Mija', my daughter, and she calls me "Mami", mother. She told me at the end of the conversation that the worker got all confused and didn't seem to believe her when she said that I am her mother and thanked them for helping her 'parents'. They left at the end of the day, looking at me strangely and laughing.
Oh yes. The floor. The Pergo is pulled up, the machines are continuing to run to dry out the subflooring, the sample of the linoleum has been taken to the lab to check for asbestos, and we are waiting for the next step. I have to say that Service Master is really on top of the work and I am really impressed with their 'service'.
I think it's time for some therapy knitting, don't you?
Posted by Willow at 4:32 PM

Oh I'm blue for you for not having hot water yet, too. Love the phone call exchange with the hispanic workers! made me smile mija! Ok the Weasley Sweater!!! Priceless. or Priceful. :)
I'm blue for me too because I'm in bed instead of at a nice prime rib dinner in Orange County :) :(
But dear just made me a Kensington dream as good as a muscle relaxer...

A very sweet little sweater!
Lovely photos of the little baby-boy and his dears.

I love that blue sweater. I've knitted about 6 tukes now, and a nice wool scarf and I'm ready to try something new...
It takes awhile for me to work with my tension.
I will be on the look out for the book.
My little boy is 5 months now..

Oh the little sweater is so lovely, lucky boy. I do hope the hot water problem gets sorted soon, not fun at all.

Me again! I had the same problem with paragraphs and it drove me crazy for ages, it would look fine until I published? Try going to "settings" and then clicking on "formatting", scroll down to where it says "convert line breaks", click yes, save settings and hopefully all will be well again.

what a cute sweater and how lucky is your grandson..you know here it burning hot outside and everyone takes a shower with the heater..sometimes i wonder why we need to have a heater with our weather, cheers :)

It's good to hear things are looking up. That's a wonderful sweater. Great job!

I'm sorry your water heater/insurance issue is still on-going. But the knitted sweater is so very very sweet and your photo posting is back. Yay!

Beautiful, beautiful blue sweater!
So glad to hear things are happening to get your house back in order!

Definitely time for some therapy! No hot water for this long is just not OK, at all at all. I'm glad that the shoring up went well though, and the sweater is lovely. I'll send warm watery thoughts your way. :)

Isn't there a beach condo somewhere that needs house-sitting till the water-heater is fixed?

Gotta get a look at that knitting book. Such a wizard little jumper!

I LOVE LOVE LOVE this sweater!!! I actually have this book because the projects are so great (yes... I have not tried any yet Willow... ) Anyways, I love how this one turned out! And my son's initial is N so I love that even more!