I have posted so many photos of doors in England and I'm wondering if people might think I live in England. So today I'm posting a photo taken in the next town north (and a little west) of my town.
Mission San Buenaventura
Ventura, California 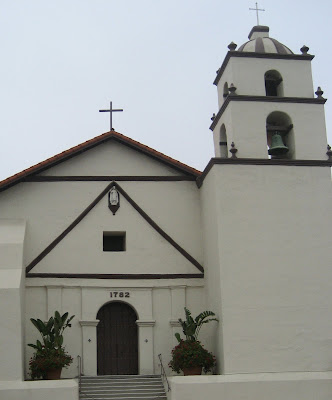 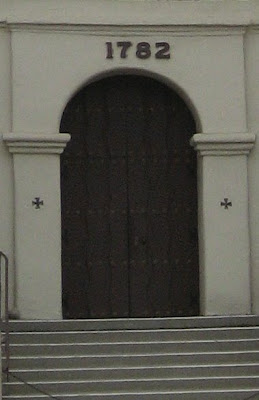 California is a new part of the New World. Jesuit priests under the leadership of Father Serra established missions and churches along the West Coast of California during the 18th Century before Spaniards, and later on, Americans, moved into California and displaced the native population. Mission San Bueneventura was established in 1782.


For more opening door photos, go to heaveninbelgium where Jientje is our hostess.
Posted by Willow at 3:12 PM

I like it! Our California Missions and Adobes are probably about as old as we can get in California
:0)

Lovely! Reminds me of old movies and swallows. :)

Those are wonderful doors and the Mission San Buenaventura is beautiful.

I remember seeing a great movie about the Jesuits and establishment of missions... if I remember the title, I'll have to send it to you.