Is it really already Friday? 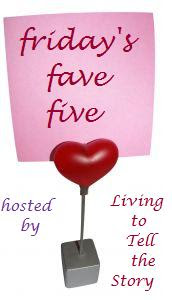 Here we are, heading in to the weekend before the last week of February. It's hard to believe we'll soon be 1/6 of the way through 2009. This week seemed to fly by. Maybe it was because I had a four day weekend.

1. On Valentine's Day, The Professor and I took a long afternoon walk at Ventura State Beach. The path took us past the Ventura Pier. The pier is constructed from wood and so very picturesque. 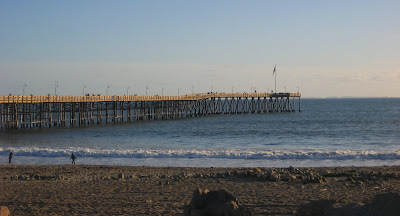 2. Tuesdays are not always my favorite day of the week because I tutor a student in Ventura and have to make the drive there and back and the back part is right at the beginning of rush hour on Highway 101. This Tuesday we had rain and Southern Californians drive really crazy in the rain. However, my student was very cooperative and showed some progress and that encouraged me. And on the trip home, I saw a rainbow in front of the mountains! Incredibly, the photo I snapped, quickly, not really looking at the rainbow because I was driving, did not have any cars in it. Seeing the rainbow and noting the progress of my student both encouraged me. The sun was shining even through the cloudburst. 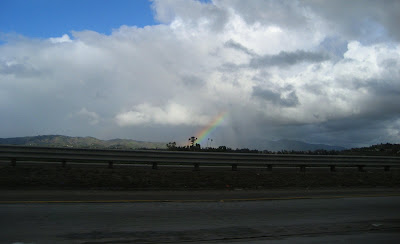 3. All the rain on Oxnard Plain meant snow in the mountains inland from us. On Wednesday and Thursday, as I turned on to the road where my school is located I could see the mountains so clearly. I convinced Ellen to walk up to the hillside above my neighborhood so we could photograph the snow capped mountains. The sun was shining on Ellen, too. 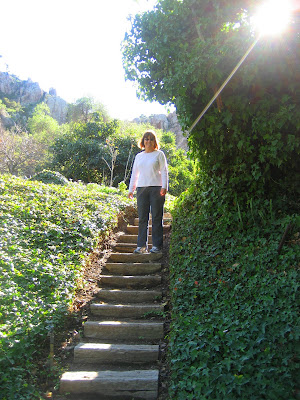 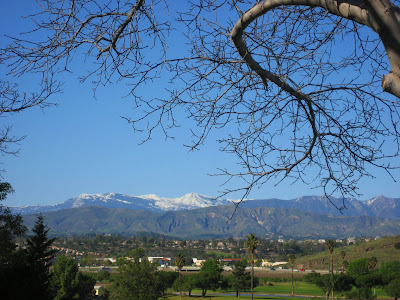 4. I finished knitting the two baby sweaters, and I cast on for a navy blue vest. I have had the Merino Blend DK washable wool yarn since I bought it in York, England in 2004 and tucked all 8 balls of it in my backpack. I've swatched and swatched and frogged and frogged and have never found Just The Right Pattern. This week in the newest Cast On magazine, I found a sample vest I can adapt for the pattern that I have been designing in my head for quite awhile.
5. Pots of Earl Grey tea brewed in my blue teapot and served in a favorite cup have sustained me this week as I've lost the battle with a cold. Again. Ah, the joys of hanging around first graders.
6. Speaking of first graders~ one of my favorite little seven year olds gave me a valentine. He chose a snake picture and information valentine, wrote my name, and signed it himself. Gotta love it!
To share others' Fave Fives this week, join Susanne at Living To Tell The Story.
Posted by Willow at 9:50 PM

Rainbows are always good to see. I love reading your Friday Five, so many positives and I am tickled by the snake valentine.

Loving these spectacular views, Willow...The Ventura Pier and that rainbow are really tugging my heart...Happy to see Ellen and what a fun Valentine! Happy weekend to you & yours!:o) ((HUGS))

I love these photos. Just beautiful!

Oh how i would love to walk on the beach today....loved your pictures.

The picture of the pier makes me so nostalgic. I used to go there all the time as a child. I would fish off that pier with my dad.

I graduated from Buena High School. Is it still there?

Rainbows are just so awe-inspiring! That's neat you caught a good picture of it. And those snow-capped mountains in the distance are lovely.

gail@more than a song said...

You live in such a pretty area, great for picture taking! I've done the same thing, snapped pictures while driving down the road! The rainbow turned out good.
Have a good weekend!

Now that's talent girl to drive in the rain on the 101 and snap a shot with a rainbow in it!! Well done. So happy you didn't take a photo of me walking up the steps with my behind showing :0)
I hope you nip this cold in the bud. Have a good weekend...

Love your rainbow photo, Willow. I'd seen several during our rains but never had the camera. Glad you survived rainy traffic.

Awesome pictures - as usual. I enjoyed your 5, or 6, especially the snake valentine!

Sounds like a great week.
Only the heart of a child can draw a snake.
My little grandson gave me a picture of a heart with blood running through it....I don't quite get the reasoning.
Today I'm taking my walking friend over the hill...for a spectacular view.

I love it too just after a rain storm!

How precious to receive a Valentine from a student. I remember passing those back in forth in grade school - that takes me back a few years now :)

Earl Grey - how I start the day myself!

"The sun was shining even through the cloudburst." I like that sentence.

I'm so impressed that you can do your own knitting patterns. I don't think I will ever reach that skill level.

What a great list! I love those snow-covered mountains; I can see some down here, too, and it never ceases to give me a a little thrill :)

A rainbow, and such a gorgeous blue sky!! No wonder you had such a great week!! I truly enjoyed reading your fave six!

Such a great list and lovely photos this week. Really enjoyed stopping by. Have a fabulous weekend!

Love rainbows. Those are lovely pictures. I love the curvy tree in the foreground of the mountain one.

What a great list Willow! Truly and busy and fulfilling week for you. I love first graders by the way!! So sweet and loving.

What a lovely post with beautiful views. Thanks so much for visiting my Favs at Small Reflections ;--)
Hugs and blessings,

Such a wonderful fave Friday post, dear friend! It is always the little things that matter most, isn't it?

Beautiful post as usual. I always look forward to your FAve Five..it always reminded me to slow down and smell the flowers. Happy weekend Willow :D

Thank you so much Williw for this wonderful field trip. This picture over the valley and the mountain ridge is gorgeous, you are a lucky girl to have it close to you.

I visit Calofornia and the West Coast a few years ago and drove through it from San Diego up to Portland and it was AMAZING.

Thank you Linda for sharing this with us.

What a sweet list!!! Love the pictures of nature. And you love I love me some tea!! :)corzo

I love your rainbow shot just clearing the clouds. :-)

I can't remember when we last walked on the beach. Your pic made me want to.