I received the TKGA Level 3 submission back this afternoon. I knew it was coming because one of the co chair people emailed me over the weekend and asked me to verify the date I received the instructions. I was able to tell her the date on the packing slip from TKGA and verify I had done the work and returned the submission in under a year. When John brought in the box, I knew what it was and I didn't open it for at least two hours. I had to go to the middle school and pull out a student for testing and then when I got back I just sat and stared at it for a while. I really didn't want to ruin my day which had been a good one, watching two of my second grade students from Watts graduate from fifth grade.
So, I didn't pass everything. No one ever has passed Level 3 the first time. I passed 12 of 18 swatches, but I will have to resubmit those swatches, one of which is the cursed entrelac, 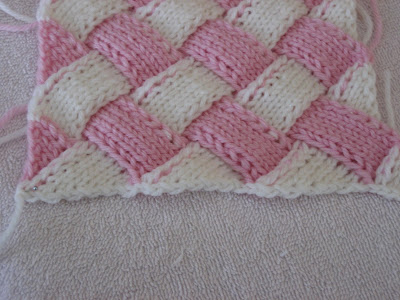 and I have to resubmit a pattern for another one. Some of these swatches weren't accepted because I knitted them following the directions LEFT HANDED so the work is backwards. In levels one and two, my work was accepted as knitted LEFT HANDED. I passed six of the eight questions; one was wrong and one was too vague.
My magazine reviews were both accepted. In fact, I got rave reviews on my reviews. "One committee member commented that the review made her wonder why she had canceled her subscription." AND "Very nice review. Engaging discussion of the magazine."
The two reports were accepted as well.
I have to resubmit different book reviews because I need to review DESIGN books, not PATTERN books.
The hat was accepted but I have to resubmit its pattern. 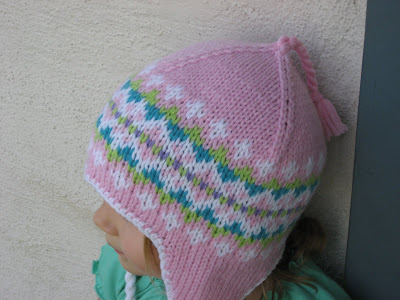 The sweater - my sweet white cables and bobbles sweater - "falls short of meeting the expectations for a Level 3 project." I guess my hurrying through it to get finished in the time frame showed. But Olivia got kudos: "All of the members of this committee want to ask you to tell your young model that we think she is a lovely young lady and this sweater is perfect for her. She brightened our day!" 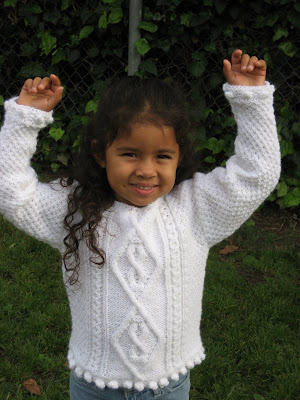 Overall, the results were better than I had feared but worse than I had hoped. I am glad that "the overall quality of your written work is excellent. You write very well and have an engaging style. Nice work. Your material was well organized and professionally presented. All committee members want you to know that it was a pleasure to review your work." Maybe the committee writes that to everyone, I don't know, but it did make me feel better because I do know that I am a good writer, I did organize and present the submission in a professional way.
So. Now. I'm going to put it all away for a little while, a few days, and then go back and look at the details. What with the end of school on Friday, a week of teacher end of year work, a trip to Visalia for a funeral, a move to plan and execute, I just can't face a new challenge for a week or two.
But now I know the worst. And it could have been worse.
Posted by Willow at 7:24 PM

Hey, that's not bad at all! You really have very little to do over, and mostly it's just tidy-up work. The cable sweater - was the problem with the design or with the quality of the knitting? and the entrelac - do you pick up your stitches along the knit side or the purl side? If I can help at all, let me know!

Great knitting, how long is your TGKA taking. Not sure what it stands for? As you know Iove knitting. I used to knit for Rowan and I think your projects look even and well finished.
Good luck with the garden, each little step helps.