Today is Son #2's birthday.
His name is Mike, he is an engineer, he's a wicked poker player and a great volleyball player. 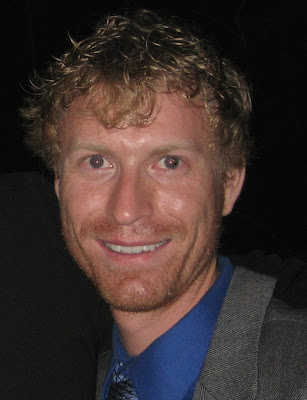 Twenty eight years ago, I had no idea who or what he would be. He was a tiny bundle of preciousness, a gift of grace from God, born early and small in the middle of the jungles of Papua, Indonesia. I think he had a happy childhood, playing in the jungle, learning from me to read and to add and subtract, swimming in the tropical ocean.

I know that vacationing in the Baliem Valley of Papua and gathering fossils from the river banks, living among primitive tribal peoples and observing their humanness and sameness and their differences to all the rest of the world made a deep and lasting impression on Mike. So much so that anthropology has been bred into his bones and blood. So much so that when he decided to look at graduate schools and career changes that anthropology, the study of those first neighbors, first friends, is pulling him in to an area of academia that, while it has surprised others who know him less well, seems to me, his mother, a perfect fit for the little boy who carried his bows and arrows around the village in a string bag, who learned to build fires the Moskona way and burned his eyelashes off playing with that fire, bamboo tubes and kerosene, who rode in an airplane before he rode in a car, who was called by all the people in the village 'Manir Meyokda' (the little village chief) because he was one of their own.

I'm excited to see where this next year takes my #2 Son.

Happy Birthday, Mike!
Posted by Willow at 9:57 AM

A very happy birthday to your son Mike! What a very great heritage he has received from all your family experiences!! Blessings on him as he pursues his studies...

Happy birthday to Mike!
Wow Linda I am in awe at the things you and your family have experienced. What rich treasures and blessings you have all been able to experience.

What a lovely way to grow up! I hope he had a Happy Birthday

What a great tribute -- happy birthday, Mike! And yes, anthropology certainly seems like a natural calling after such amazing experiences.

What an amazing childhood! Raising a child up on such a path it is no surprise he has returned to it.

Hmmm... I did not compensate. That makes a lot of sense because I couldn't figure out how to fix the stretching problem. I still loosely base my designs off things I've made before and just combine them in new ways and none of them have had an increase around the cable. How would that work?

p.s. funny how anthro got so popular in our family! 3/4 kids considering grad work in it! :oP

post post script.... I updated my blog by using thecutestblogontheblock.com (there's a link to it from my top left corner). I also had to update the blogger system, which you can do in your template section ( I think, otherwise check with blogger help)

Isn't it fun to watch our kids grow and develop! Happy Birthday wishes to Mike!

Chance led me to this lovely story of Mum and Son, then I see you are into knitting, spinning and Elizabeth Goudge - all subjects ring my bell!

I loved reading this heartwarming tribute to your son for his birthday. I love that he has gone back to his roots and his passion.

Happy birthday to Mike! What a amazing way to grow up. Were you missionaries or in the Peace Corp? Anthropology is so interesting -- I wish him success!

Thanks for answering my forward about the Newbery Award. I liked your opinions. The teachers in my family feel very much like you do but feel the award selections will probably evolve with the change in times.

Happy Birthday to your son Willow.
That must havebeen such an amazing experience for a young boy!!
No one can take that away!

Happy Day, Mike! What a handsome man is your son, Willow...what a great smile! His vacation destination is exciting...no doubt he is having a fabulous time! Happy Day to you too, mom. ;o) ((HUGS))

Oh, a belated but very happy birthday to Mike too!!! Do you realize how amazing your family is and how amazing your kids continue to be?!!! So, when are you going to write your book about your life?!! Sometimes I forget all of the wonderful things you've experienced because you're so down to earth and easy to talk to ... yet I know there's such a wealth of information inside your head!!! I was just talking about you last evening at the Yarn Shop! About how wonderful a knitter you are! Too bad we're practically on different coasts. But you always seem near anyways! love you! Bethany

Happy Birthday to your son and congrats to you and your husband for doing such a fabulous job as parents. Isn't it fun to watch the paths our children decide to walk? Life is a wonderful adventure.

Wow what an impressive start. MAy he continue to be blessed this next year.

He is so cute! If I may say so! Don't we all think that way of our children? Happy Birthday Mike!

Congratulations on producing a successful human being! Good job, mom!

You have given your kids such a rich heritage. . .I bet he had a happy childhood playing in the jungle.