Yesterday I showed you what The Professor and I explored before having lavender scones, clotted cream and jam for tea at Chelsea Physic Garden. We sat outside under the trees and enjoyed looking around at the signs of a working, functioning garden. 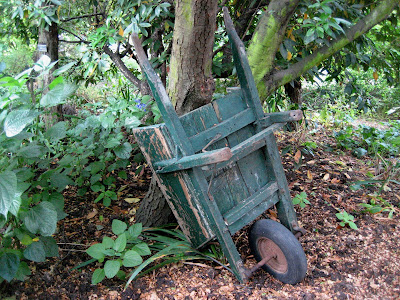 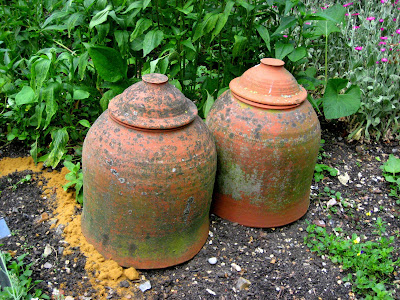 After we sipped the last of our tea and wiped our lips, we ventured out again to see the Fish Pond at the other end of the garden.

We passed the Rock Garden on the way. The Rock Garden is famous because the various rocks for assembling it came from different places including

"stones from the Tower of London, Icelandic lava (brought to the garden by Sir Joseph Banks in 1772 on a ship named St. Lawrence), fused bricks and flint. This curious structure has been listed Grade II* and is the oldest rock garden in England on view to the public. It was completed on 16th August 1773. " 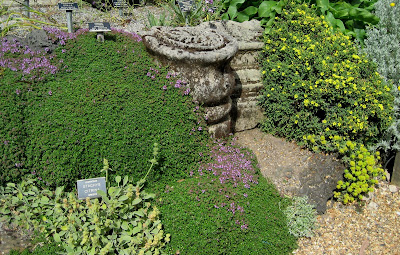 The Fish Pond was much more overgrown with lily pads and other pond plants than when we visited in 2004. 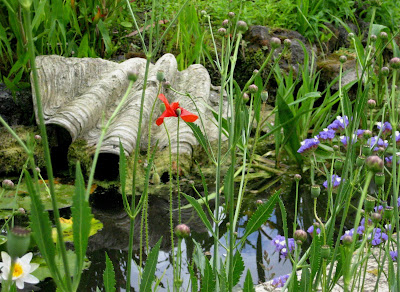 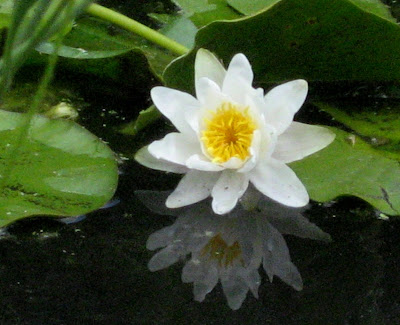 Wild flowers lined the edges of the rectangular pond. 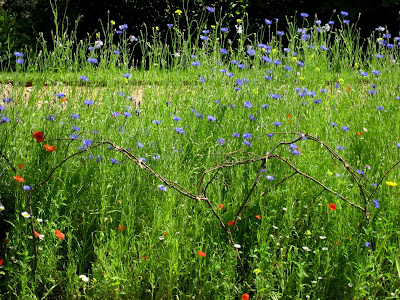 It was hard to tell which bright orange spots were koi swimming under the surface and which were reflections of the orange poppies. 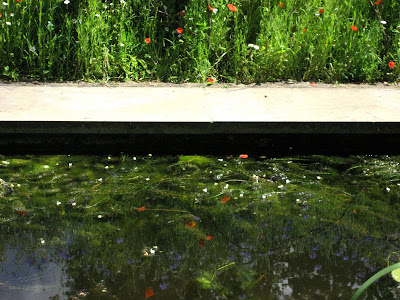 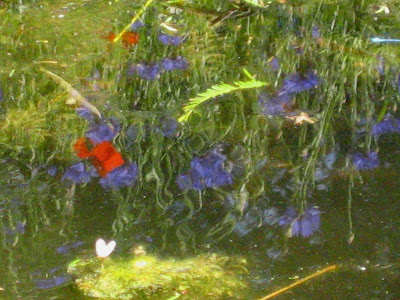 The reflections looked like a Monet painting.
I don't wish to overwhelm anyone with too many photos of this magical place. Shall I post one more set of photos tomorrow?
Posted by Willow at 7:29 PM

Oh, Willow! You can't stop now! You know, through these two posts, I'd been hearing "psychic" in my brain even though, if I read carefully, it's physic! I love love that shot with the blue and orange flowers. So summery and full of joy.

So cantik!! I love koi and all water plants..and yes the last piture is very Monet :D

So Willow, did your daughter tell you the news?!? ME AM ENGAGED!!!

oh..yes, please post not one but a few more sets!!
How does one describe a smell?
I only thing similar was an Elizabeth Arden, Green Tea Lotus perfume I tried on during Christmas, that's the closest to a real Lotus smell. It's very subtle, sweet and mild...and totally heavenly. The people walking by are looking and me smilling...I kept sniffing the lotus all the time :D

Yes, more please, Willow! This is delightful...thanks for taking us there! :o) ((HUGS))

Whauw, when I see these pictures I can't wait for spring time to arrive! ( but it is verry much winter here) And yes I can almost see mr. Monet walk around in this garden.

Oh, yes , please. Shots of sun and flowers gives me will to live.

The pictures are beautiful and magical and I would love to see more :)

Oh, yes, it's like Monet! So beautiful to see these summer colours! Have a nice weekend, willow!

It's so lovely! Chelsea Physic Garden is definitely on the agenda for my next trip.

If I ever go to London, I want to go THERE! That last picture does look like a Monet.

I didn't realize England could grow so many beautiful plants. I hear that England is gloomy and cloudy. Yet I've always wanted to visit!

Ohhhh yes, yes, YES PLEASE!!!
What a wonderful place, and such breath taking pictures Willow!! I so love the last picture, it almost looks like a real Monet!

I saw your comments on Jientje's blog and would love to have you join us for "Thru My Eyes 2009"! Trust me, I don't always get one posted and it's on my blog...LOL It's for sharing, learning our camera's, but, most of all, friendships! I'm soooo geeked to have Jientje sharing her photos, thoughts, comments, and it's soooo "kewl" knowing that I have a "friend" that's waiting for me after a long day at work...LOL

Go for it!! We can use some reminders of your trip!

Oh, the green! Your pictures are so lovely! It's like taking a little vacation from all the snow here!