The month has Marched in with sunshine and wind.  I am happy March is here because that means the end of winter is in sight.  It is the first Wednesday of March and that means Wednesday Hodgepodge.

1. Is March coming in like a lion where you live? Aslan, Simba, Elsa, The Cowardly Lion...your favorite 'famous' lion?

So far, March has come in hopping around like a bunny on weed.  Cold, cold nights and sunny days.  At least there hasn’t been snow.

Without a doubt, Aslan is my lion of choice!  There is so much symbolism in CS Lewis’s depiction of Aslan.

Most people live in their homes and communities all their lives.  From childhood, I have been an adventurer.

3. What item that you don't have already, would you most like to own? Any chance of that happening soon?

I have everything I need and most everything I want.  We have been looking for furniture for our family room.  In the near future, we will be purchasing chairs and a sofa.

4. March is National Flour Month...are you a baker? Cookies-cakes-or pies...your favorite sweet treat to bake? What's the last non-sweet thing you made that called for flour?

I enjoy baking pies and cookies.  Cakes, not at all.

It has been so long since I baked a sweet treat, I honestly am not sure.  Maybe the Christmas cookies I baked in December?  As for a non-sweet flour food, I guess it was the dinner rolls I baked for Thanksgiving.

5. There are 31 days in the month of March...where were you and what were you doing when you were 31? If you haven't hit that milestone yet, then tell us where you were and what you were doing 31 months ago? (if math is not your thing, that would be August 3, 2018)

When I turned 31 in March of that year, I was living in the jungles of Papua, Indonesia, which is the western half of the island of New Guinea (which is directly north of Australia, for those who don’t know South East Asian geography).  In March, we were living in mission housing away from our home because I had just given birth to my third child, a son, and was waiting for him to be old enough to receive a whooping cough vaccination since there was a breakout of that disease in the village where we lived. 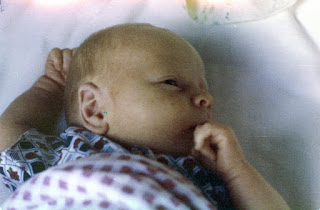 Yes, he was adorable! 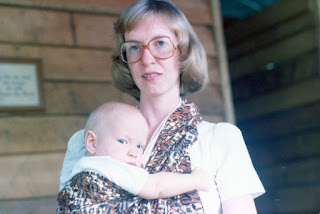 6.  Insert your own random thought here.

Hi! I loved your answer for how you beat to your own drum, and from the sounds of it you've been to some interesting places. Glad I stopped by!

“March means spring” and birthdays! What a sweet picture of you and baby. My tulips are just barely pushing out of the ground. Happy day. Mary

YAY for loving ASLAN and for March being spring and yay for your answer regarding "marching to the beat of a different drummer". LOVE it.

I thought of the Lion, tribe of Judah. I am blog hopping a bit today. I still have to do the questions. I do have a lot of pics from my last post of my parents and myself. Love the picture of you with your baby in a sling.

Fun to see your 31 year old self! ...a bunny on weed, LOL! Hopefully the weather will make up its mind soon. Happy March to you!

Wow, you are adventurous! Love the picture of you and the baby in the sling. We know missionaries who are serving in Papua, New Guinea. I just received an update from them today. Have a great week :)

You are adventurous! I've lived in the same geographical region my whole life -- I've lived in 6 different cities (or suburbs) of the same metropolitan area. I imagine you have some amazing stories from the places you have lived.

Carla from The River said...

Hi, I like how you answered #2! I enjoyed hearing more about your time in Papua and thank you for sharing the photos.
Carla

I had to look up Aslan. I have seen the movie. Being an adventurer is cool. I seem to do most of my baking during a holiday. Don't need to eat that stuff otherwise. Well you certainly are an adventurer after reading #5. Take care...

A bunny on weed! Made me laugh out loud! A missionary! I so admire missionaries who are serving and still raising a family in a country other than their own. That is a special calling for sure.

So you became a mother at 30 and I too ! The only difference you were at your 3rd child and I at my first (and last) At that time I was an old mother because most of the women had their first baby between 20 and 25 today it's more 30 to 35. I didn't want children so early I only married at 25 and then I wanted to be alone with my husband for a few years. So when our son was born I was 30 and probably the oldest mother for a first child when I came and picked him up ! Was good too, because all my girlfriends were much younger than I because of this !

Being a missionary I say you saw some interesting places over the years. I don't think I wouldn't like living abroad, though. Visiting faraway places would be fine if I weren't such a scaredy Cathy. :D Thanks for dropping by for a visit. Have a good evening!

Adventurous indeed, and I believe God gives us what we need for the lives He calls us to live. And that's different for everyone. Hubs and I were just talking about our lack of real roots as a family. Moving often opens up a world of opportunity, adventure, and more but you also give some things up when you are perpetually starting out somewhere new. I wouldn't trade the life we've had though, and think the blessings outweigh the hard things. Thanks for stopping by my daughter's blog too : ) Have a nice weekend!

I so admire that you are still an adventurer. I hope we never outgrow that need to get out of comfort zone and do things that are challenging and just plain fun. I'm assuming you were a missionary? Keep me posted on your new plans for your flower beds.