Bandung is a large city on the western end of the island of Java, in Indonesia. It is up in the mountains northeast of Jakarta, about three hours' train ride away from the national capital. Bandung is a university city. In 1979, when we went there to study Bahasa Indonesia (the Indonesian language) there were five universities in Bandung.

We lived in Bandung for ten months. Our main responsibility was to become fluent in Indonesian, which we did. At the time we had two children, aged four and two. In fact, they had their fourth and second birthdays within weeks after we arrived in Bandung. When we left Los Angeles in July, we were allotted six suitcases for the four of us because the little one wasn't yet two and didn't get luggage allowance. We had to take our own bedding, clothes and personal items for our ten month stay because all the rest of our possessions were being shipped (literally) to Irian Jaya (now Papua). Christmas decorations weren't high on the list of items to pack in the suitcases.

I wanted our first Christmas in our new country to be remembered. So I went to the fabric bazaar (the one where foreign women got pinched walking through the aisles, but that's another story) and found some aida cloth and embroidery floss. You may know that Indonesia was for four hundred years a colony of The Netherlands, so the concept of cross stitch was not unfamiliar. I bought red fabric and some ribbons, and I cross stitched and sewed Christmas stockings for our pre schoolers. 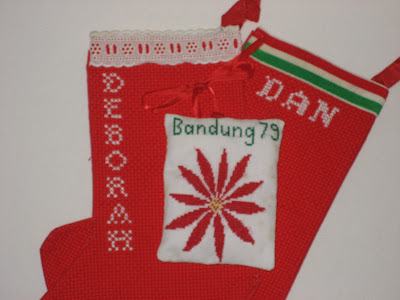 I also stitched four little tree decorations. We didn't have a tree, but I hung them on a string in the living room. The tree was The Professor's, the nutcracker, Chaplain Dan's, and the candles were mine. Kiti's angel has gone to Phoenix to live on her tree. 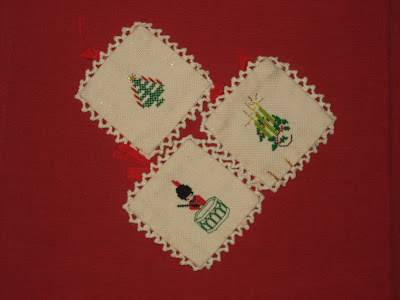 One little known fact about living in the tropics that we learned early on is that metal WILL rust in the damp and humid climate. Evidently I left a metal hanger in the Christmas box one year. 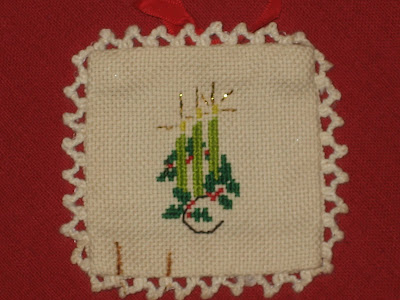 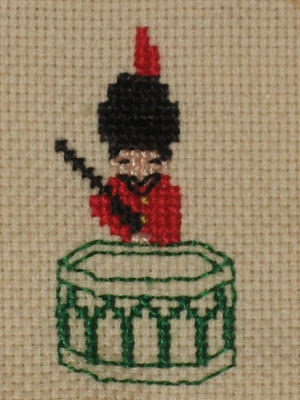 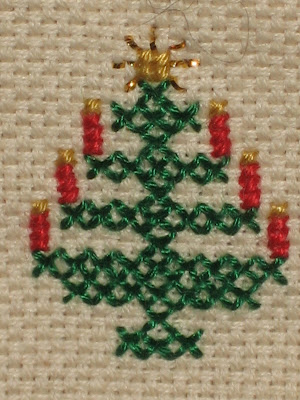 Every year when I pull out the Christmas decorations and see 'Bandung Christmas 1979', I am transported back to that land of bananas, coconuts, terraced rice fields, active volcanoes, and rambutan fruit. The first time we ate rambutan in Bandung was that Christmas because rambutan season lasts only three weeks in December. We bought a stalk of the red spidery looking round balls, split open the peel with our thumb nails and tasted the sweetest sweetest fruit in the world. A Bandung Christmas!
Posted by Willow at 3:19 PM

I was five when my family got to Bandung for language school, and my brother was 3. '87. I don't remember much of it, but there are vague memories and plenty of photos.

What an experience that must have been. It is so wonderful to visit (and live in if we are fortunate enough)foreign lands.

What great memories of a Christmas far, far away, in such a different place! Love the cross stitching!

i've been really enjoying your posts about christmas memories and traditions. has me thinking about the things my family does and what kinds of new traditions i might want when i start my own.

How wonderful that you have these precious memories from Badung. They are all just lovely. Thanks for sharing these memories. I've enjoyed my visit, as always.

What an exotic, lovely trip you have taken us on. Thank you!

That must have been a very different Christmas.

That was an experience to remember...different and memorable for so many reasons. Good for you that you kept these embroidered squares.

What a lovely story.

How are you feeling, by the way?

I love your little cross-stitches and I love that you have all these wonderful stories that you share! You have a fascinating life!

Willow, what a fabulous story of your Christmas in Badung! When I used to watercolor, my mom asked me to send some pieces to relatives still living in Vietnam. But the watercolors had to be laminated to prevent them from mildewing. Ah, that humidity!

I really wish I had some fresh rambutan right now. And maybe some of those special Christmas pink-and-green cupcakes...

I don't remember Christmas in Bandung, though I do remember the one following.

Your cross-stitching is lovely - and how wonderful it is that you have all of these Christmas memories.

I wouldn't mind some Rambutan right about now! It sounds delicious...

Just wanted to wish you a great Christmas and a Blessed New Year.

Merry Christmas Willow! Thanks for stopping by today. They did the 9 lessons and carols in church today - I always think of you now on Sundays because of our visit.

No, I have not framed those cards; I considered it once, but don't really have wall space for that. Right now they are in an acid free scrapbook that I still have to finish, about my ancestors.

Have a wonderful Christmas with your family.

Just had to drop by and tell you that I received a knitting journal (a late birthday present). It is full of knitting trivia ... I thought of you immediately when I was looking through it.

I hope your Christmas is filled with much love, laughter and cherished memories!

Have a very Merry Christmas. Don't you love that those special moments that live in your heart forever.