Occasionally I open my laptop, click on My Pictures, scroll down to England 2008, open those files and reminisce about our wonderful British holiday last summer by flipping through the photos I took.
I have not posted any photos from the trip for several months and I have decided that, every once in a while, I am going to do it, just because--because I want to.
Random Interesting Photos of Ancient and Modern Buildings Juxtaposed Next To Each Other.
When I visited Italy in 2001 I was continually amazed at how the inhabitants of Rome worked around the fact that they lived in an historic city. They attached their new buildings directly on to their ancient structures, they built another edifice on top of an older ruined one. I noticed this phenomenon in London, too. For people who live in 'old' places it's just every day life, but for those of us who live in 'the new world' and consider a 200 year old building to be 'ancient and historic', it is, simply put, fascinating. 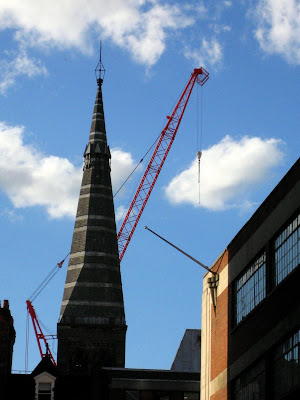 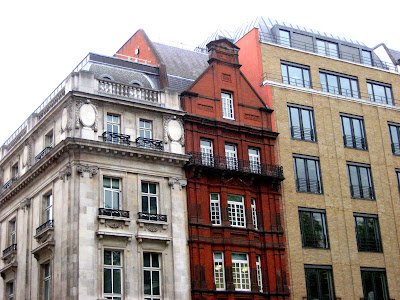 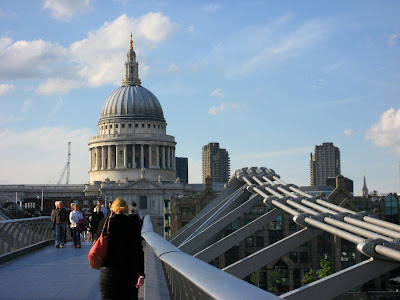 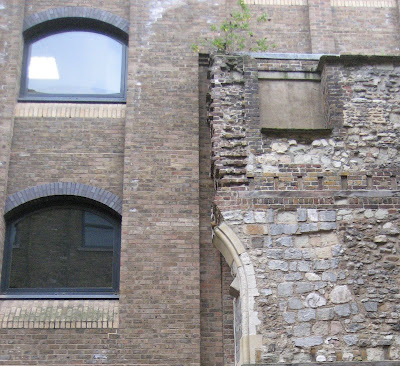 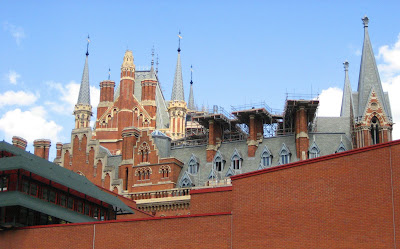 The New British Library in front of a cathedral 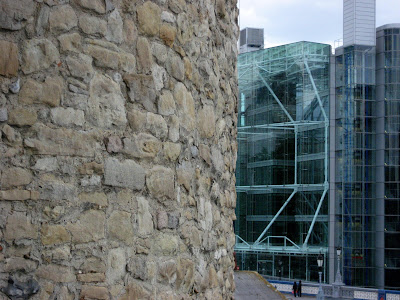 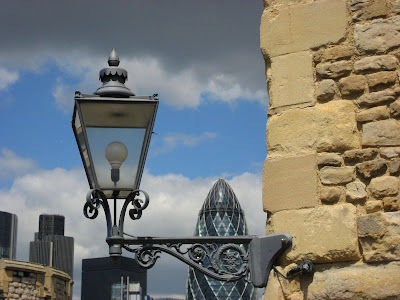 And my favorite: Canterbury Cathedral on the left, Starbucks on the right 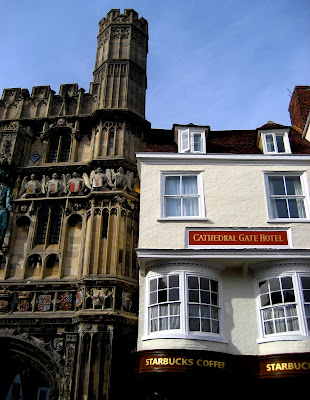 Another Starbucks..what else? Enjoyed seeing a little more of your trip!
We must compare your mom's banana bread recipe with the one I'm using. I remember a darker bread and maybe brown sugar was used instead of white.

This is a good collection of old and new buildings. The juxtaposition is so striking in photo, I can only imagine seeing it in real life!

I have always been fascinated with architectural designs, especially when the old and new overlap and intertwine -- beautiful photos! Hugs, Laurie

Wow, I love these photos Willow. What a great eye you have for juxtapositions. You are so right....all this older than 200 years architecture is truly fascinating to us "new world" dwellers.

The stonework is just amazing! Hubby and I really want to go to the UK and see all the sights. Dream, dream, dream...

Love this series of photos - they really capture how well the old and new kinda fit together. Sometimes it is terrible but usually it looks great!!!

Thanks for sharing your trip with us, Willow. That juxtapositioning of the old and new is so intriguing. I can't make up my mind if I like it or not. There is a part of me that likes old things undiluted.

Dearest Kak Willow :)
I always love all the old buildings in UK. Sadly..ours are not so well preserved here. Wonderful collection of photos and I am sure more goodies to come.

Yes, that is so true, if you go to London, you can't overlook it, it's everywhere! I took lots of pictures there too!

I love living vicariously through your photos, mumsy! But... the Starbucks in such close proximity to Canterbury Cathedral is a little disconcerting. Although, maybe Chaucer's tales originated in the same environment as most 21st century writing! ;oP

Thank you for sharing. These are wonderful photos. I like seeing the old and the new right up against one another.

Oh, thank you, Willow! I needed a dose of England! ;o) Really, I did...I miss it sooo! Just loved all your photos. Actually, I have a similar photo we took of the British Library...but what looks like a church behind there is actually part of St. Pancras Station with all those majestic spires! Do keep the photos coming...I dream of England...And we look at our summer photos from this summer in London lots too...tee-hee...Happy Days, my friend ((HUGS))

An interesting concept you have brought out here Willow.

juxtapositions from Sara, now I will have to look that one up!

These are really great photos!! I love the contradictions in architecture (though in real life, I'm not so sure!!). I remember some of these photos from when you posted them on your blog!

In the second pic, the little redstone buiding is so cute, well maybe cute is the wrong word, but it is charming.

I never got to see St Pauls--I' mostly went to London on biz trips , so... someday.

I like the way you shot the different textures of stone together and the contrasts.

I notice you like knitting--I'm going to take a beginners class soon--I posted about it recently so I can't back out of it.

Those are great pictures! :)

lovely photos of England Willow, though at the moment its freezing and gloomy. It always amazes me that we manage to knit the old with the new some times it works but sometimes it definately doesn't. I have enjoyed reading your thankful posts and your new grandkitty is so cute. What a great idea to knit in the car, i've never tried it. I have given you an award please pop over to my blog and collect it. I hope you have a good week. Jane x

This baby is the first grand baby on both sides so he'll be very well loved, that is for sure :-)

We're excited and a little nervous -- waiting is so hard!

Oh one day. . .one day I'll go there too, I loved your photos and look forward to more peeks into your memories of England.

I always welcome a visit to England!