One of Older Daughter's friends is visiting with her son, so we have joined them on some adventures.  And we have gone on an adventure ourselves, too.  Here is Willow's Week in Five Faves.  Here is the link to Friday Fave Fives.

1.  Our fence is finished!  There was a small section in the front that wasn't done but we ran out of fencing and had to order additional materials.  They arrived and the fencing guy came and put up that last bit.  Done!

2.  A day at the zoo.  When I say a day, I mean the whole day.  We arrived shortly after it opened, and we shut it down.  I should have worn a pedometer!  The exhibits were amazing! 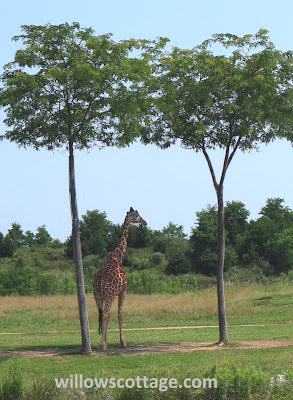 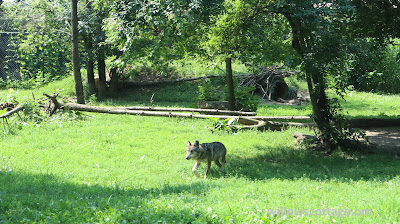 3.  After that long and fun filled day, we decided that a 'resting day' was in order.  Resting?  Sort of.  We took a short hike around Flint Ridge State Park.  The background is that this area was the main source of flint used for arrows and tools from the Atlantic Ocean to the Rocky Mountains.  You can see bits of the flint and the pits where they dug it out even today.  Then in the afternoon we had a picnic lunch and strolled around Dawes Arboretum.  More woodsy areas because it was hot and humid.  It was wonderful to again stroll through God's beautiful creation. 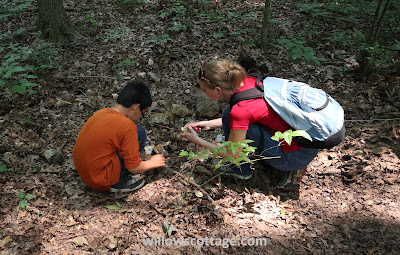 4.  When we learned that our oldest, Chaplain Dan, was at Ft. Knox, KY this week for training, we figured an overnight trip was in order.  It was worth the drive just to have dinner and spend a few hours with him.  It is these times that I treasure. 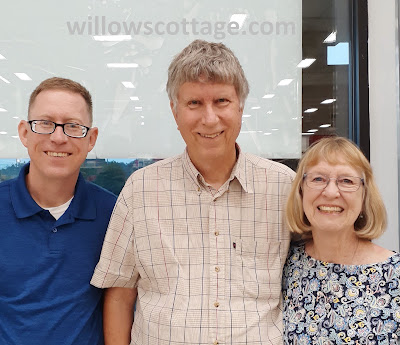 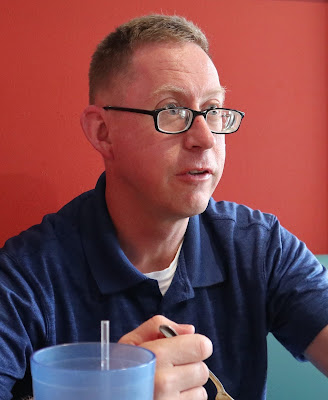 5.  On the way home from Kentucky, we decided to get off the freeway and take some less traveled roads.  Serendipitously, we found a botanical garden which has reciprocal privileges with our local arboretum!  It was a delight.  AND, it had a fairy trail which deserves its own post (come back in a few days and enjoy!)  I love those unexpected hidden treasures.

And now we are home and relaxing a bit.  My own bed, my own shower, The Professor's homemade coffee which is the best in the world.  Maybe next week won't be quite the zoo this week has been.

oh it sounds like a fun week with wonderful blessings!! What kind of coffee does your hubby like?? our fave this summer is Ethiopian fair trade slow roasted, small batch coffee bought from a company out of Uganda. Every dollar spent on it goes to help fund scholarships for girls who've come out of sexual slaveryand/or poverty.

YAY for getting to see your son AND explore a new garden.

I haven't been to a zoo in over 10 years!! the last one was when Claire was about 9 and we went to the Pittsburgh Zoo when we were vacationing in Pittsburgh and the Gettysburg area/Amish Area/hershy area. it was a GREAT zoo and one of the best i'd ever been to.

Happy to read you hit the road to see your oldest. Worth every mile. Glad that fence is complete. Happy Saturday to you.

How nice to have the fence done. Sounds like great excursions with your family. Funny that hiking is what you do on a rest day. :-) Glad you got to visit with your chaplain son. The botanical garden and fairy trail sound like such fun, especially as "accidental" discoveries. The best part of a trip is coming home to my own bed and bathroom.

Ok. I missed commenting on the last couple of posts, but I did enjoy them. The wedding picture reminded me of your lovely long hair. You and John have had lots of adventures since those days.
Trips to see our families are always so wonderful, but you are right, it’s always good to be home.
One more thing, I remember you speaking of the delight of the first moment you saw one of the girls driving past. I had the same exact feeling when that happened to me when i first moved here. When you have lived so many years far from family, it is an amazing feeling. Mary

It sounds like it was really busy, but it sounds wonderful too!

It sounds like you had a wonderful week. The smile on your face in the photo with your son speaks volumes. Even a few precious hours with our children makes us happy, doesn't it? I love zoos. You didn't say which one you visited. I know Columbus has a fabulous zoo. I've been there many times. In fact, my late husband and I had annual passes. We enjoyed it that much! xx

Family visits are the best. Glad you had a really good one!