I harvested my coriander seeds. This is the total amount I got from the seeds I planted in a pot last spring. And here is the tale. I planted several seeds in a terracotta pot in March and placed it in a somewhat shady spot on the side of the Baby House by the Freeway. I knew it wasn't the best placement but the neighbors have a dog and I didn't want to have the pot knocked over. So behind the fence it went. Unfortunately nothing sprouted. I assumed that the seeds, which admittedly were several years old, having been brought with us from Oregon, were not good any longer. So I threw some zinnia seeds in the pot. They too were transported from Oregon and I wasn't sure they were viable either. But what did I have to lose except a little water? In May, I noticed the zinnia were up and then, wah la! There were cilantro seedlings! I pulled the pot around to the front of the house so I could more easily water it and watched my duo planting grow. Then one fateful day as I returned from school, I noticed potting soil on the ground in front of the house. And zinnia and cilantro plants strewn everywhere. Upon closer inspection, I discovered that the neighbor dog had dug up the pot. I had not been aware that dog bones could be planted in pots and be expected to grow and reproduce, but evidently Sadie had read in the Doggie Times that it was possible. I pulled her bone out and presented it to her owner saying, "I think Sadie lost this in my zinnia pot." Anyway, I figured the plants were done for, but I scooped up the potting soil from the cement and put it back in the pot and tried to cover up the roots as best I could. The result of all my efforts: two spindly zinnias and one tablespoon of coriander. 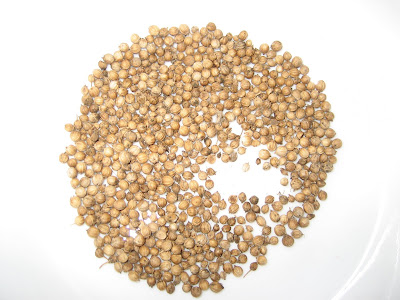 The basil fared better. I kept the seedlings in my window box. I knew we were moving by then and I eventually planted eight little plants here at the new house. They have produced better than the coriander. I make pesto out of as much of the basil as I can, then I freeze it in ice cube trays. Three cups of fresh basil = nine cubes. My precise recipe is to throw a couple of garlic cloves in with the basil in a blender, slug a bit of olive oil in and salt to taste. I alternate basil, garlic, and oil and just let 'er rip. 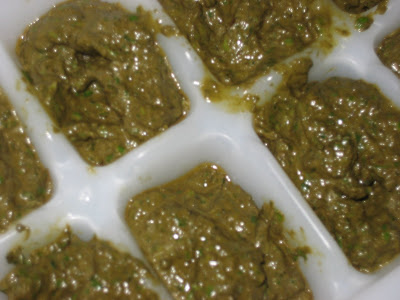 I have tomato sauce simmering on the stove this morning. I sauteed garlic, onion, fresh parsley and basil from my garden, dried oregano and thyme, then cut up about four lbs of fresh tomatoes and put them in the pot. I hate wasting any of the pesto, so I rinsed the blender with a little water and tossed it (the pesto water, not the blender) in the sauce for extra flavor.

Not much of a harvest here at Willow's Cottage, but for the first season, I'm pleased I have anything.

As much as I would love a laptop, it sounds like it is just as well that I do not have one.
The Basil mixture sounds good.

What wonderful bounty from almost nothing! How are you at making bricvks without straw? I already know you are skilled at feeding multitudes.(camp cook)

Hi Willow, thanks for visiting mom's 1942 blog. Sounds like you are a most talented lady. I'll have to check out and read about your gardening adventures. Congrats btw on getting that teaching job--and the professor too.

You have a lot of patience. If my neighbor's dog had damaged anything in my garden or yard, I would have blasted them!

Of course, then, I'd have to defend the fact that I feed the feral cats in the neighborhood...