All over Blogland, people are posting photos of Christmas decorations and writing about their traditions. I have been reading and imagining having those traditions in our family. I have realized through the years since returning to the US and living here that, during those years when we lived in Papua, we didn't have a lot of traditions other than just being together during Christmastime. Of course we had Christmas stockings on Christmas mornings and we six had presents we gave each other and goodies that our families would send us by slow slow mail. Our moms would go to the post office in September and send off the presents for their grandchildren and would hope the boxes wouldn't be lost, stolen, damaged or late. There wasn't much one could purchase in the stores in Manokwari in those years in the early 1980s. And if we were interior in one of the villages, there was nothing at all because there were no stores.
Christmas in Papua, Indonesia was mostly about going to church on Christmas Day and visiting people on December 26th, which was Second Day Christmas (Hari Natal Kedua). But it was wonderful because the older children were home from boarding school and we could all be together. We played Scrabble, Uno, Oh No Ninety-nine, and Hearts. We put together puzzles. We read "The Best Christmas Pageant Ever" every year, and then we would choose a book for The Professor to read to us--a nice long chapter-after-chapter book. We'd read after lunch while everyone in the whole country rested, we'd read after dinnner, The Professor sitting by the kerosene lamp so he could see the print--there was no electricity in the village, and in town at the Bible School, the generators were turned off at 10pm, so if we wanted to finish that last chapter we had to fire up the kerosene pressure lamp.
When we left Papua and moved to Oregon, we each were allotted three suitcases by the airline to carry our worldly possessions. We sold almost everything-- toys, pots, pans, dishes, decorations, and we shipped our boxes of books home by slow slow boat.
There wasn't much in the way of Christmas that made the cut in those suitcases. So we started over making traditions and gathering Christms memories. I'd like to share three of them.
Many years ago, maybe 35 years ago, before my brother married my sister in law, she gave our grandma a hand blown glass Christmas tree. Grandma put it out every year and I remember seeing it on her piano when I was home one Christmas to visit. When Grandma passed away, my mom took it and put it out on her piano. After my mom was gone and my dad moved into a nursing home, I brought the little glass tree to my house and I have put it out every year in Willow's Cottage. It's only 6 or 7 inches high. 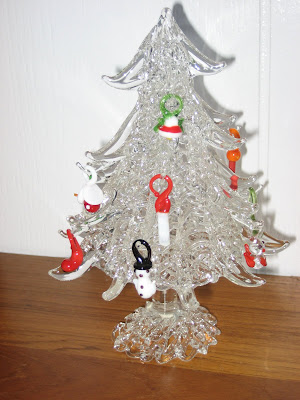 Even longer ago, before I met The Professor, my mom made a ceramic candle lamp. You can see that at one point, the flame was broken and reglued. I put it up every year, not because I think it's beautiful, but because my mom made it. 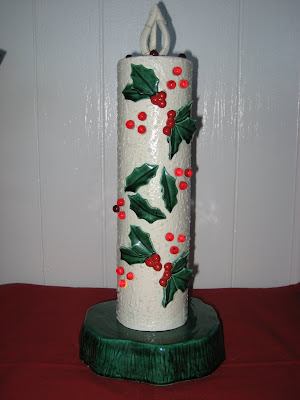 In the 1980s we lived near Chicago for two winters while The Professor was working at the hq of the mission we were working with. We stayed in a 3 bedroom furnished apartment and again had brought only our clothing with us from Papua. I found this nutcracker the first December we lived there, and took it back to Papua, and eventually to Oregon, and now to California. 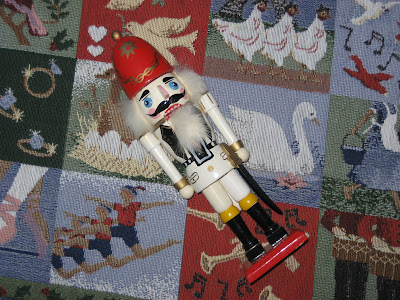 Wherever we have lived, we've enjoyed an Advent wreath with candles. This year I chose an evergreen and pine cone wreath and white pillar candles. 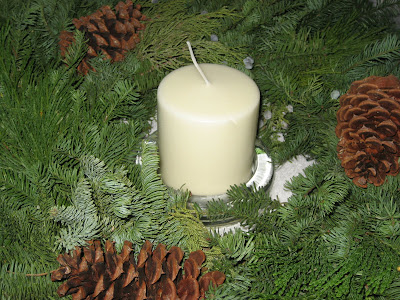 
What are your traditions?

This was such a good post to read. I loved hearing about your traditions ... the glass and the ceramic trees are such wonderful keepsakes.

My family gathers on New Year's Eve for a meal before church at midnight - we have tourtière, now salads and dessert. After church, we come home to a bubble ring.

On Christmas morning, presents are open, stollen is eaten and then phone calls arrive from family members scattered in many different locations.

I am decorating my house plants this year instead of buying a tree. I like having lots of Christmas lights throughout the house. We still go over to my parent's house to celebrate.

You forgot to mention Anamaniacs Christmas

What a wonderful post to read to start my day! You brought home the most important things of Christmas. Just being with those you love is a great way to honor the Saviour's birthday. If I had it to do over again, if my kids were little, I would put much less emphasis on the gifts and much more emphasis on what we could do for others. Thank you for sharing your lovely traditions. And I LOVE the ornaments of your mother - how special they must be to you.

I really dislike eggnog (ew, slimy! gross!), but my favorite Christmas tradition really is our family's Christmas cookies: So thick and flavorful, yet not too sweet, even when decorated with frosting. I actually like a lot of the food at Christmas (unlike Thanksgiving - bleh! except for mashed potatoes, sweet potatoes, and Mom's apple pie), since it emphasizes cookies and candy, rather than a giant dead bird or dead pig.

How unusually and nice the glass tree and the ceramic candle. I enjoyed reading about your Christmasses in different places. Gives me an insight into yur life too.
My traditions. Getting everything set out for dinner on Christmas Eve so it is all ready next morning. Having Christmas dinner in time to watch the Queen's broadcast at 3.0 pm while we are having coffee. Present opening after breakfast. A walk either before or after tea. After tea is the best because it is dark and you can look in everyones window and see what they are doing. Well I am sure there are more but this willdo for now.

Anonymous said...
This comment has been removed by a blog administrator.
4:51 PM

I love lighting the advent candles each Sunday! And of course decorating the tree with the kids. My parents always send an advent calendar and I get the most excited to open the little paper doors and read the scripture!!

Willow, I loved reading about your Christmas traditions and memories and seeing your special ornaments. They are all lovely and must bring back many fond memories for you.

We like to listen to the Carpenters' Christmas album around here, among others.

I want to know more about what you were doing in Papua, Indonesia. That sounds fascinating.

Willow, I like your traditions very well! I used to say that my family tradition is to never do it the same way twice. But then we settled into something of a routine. However, this year, it's back to our traditional nontradition - we'll be having Christmas dinner and presents around Dec 29 (parents out of town...etc.)

You have some very lovely mementos. That crystal Christmas tree is just lovely and such fond memories of your grandmother.

Our traditions have carried down over the years. I loved baking Christmas goodies with Grandma and today make them with my grandsons. We always have a live Christmas tree. We take the boys to a Christmas tree farm and cut our own. This year we aren't having a tree because we are leaving on the 27th for vacation. It is the first year that I've never had at least a 7 foot tree. This year we bought a little tree in a container that we can plant in the spring if it survives.

Christmas dinner is always at my Mom's.

I enjoyed my visit, as always.

Willow, I stumbled on to this post when I googled Christmas in Papua. I too grew up in Papua, although in Sentani and Abepura. Fun to hear your memories!
Kacie

Willow, I found your blog through Barbara's in England. I lived with my husband and three children in South America for many years, also doing mission work. Your experiences sound very similar to ours.
We developed our own traditions, apart from family. It was always hard, but now that we've returned to Canada, I find that the memories of those Christmases far away are very dear. And the children, only one of whom lives at home - the others are married, all speak very positively about the way we celebrated Christmas in Ecuador.
One thing we loved doing was going to the beach during the Christmas school vacation, either right before Christmas Day or right after.