I have always considered the moss stitch to be a 'country style' stitch, a stitch used for homey comforts such as snuggly afghans, one featured in casual sweaters or scarves. The aran sweater I knitted for the knitting guild submission has liberal amounts of moss stitch, and we all know that aran sweaters seldom look 'urban'.

When I cast on a charcoal alpaca/acrylic blend yarn with a second strand of black wool for a scarf for Son #2, I experimented with mistake rib in different widths. I wanted an urban look, something to match his black leather jacket or his London Fog trench coat. I knitted and tinked, changed needle size, knitted and tinked. It just wasn't working.

I had made a blue moss stitch scarf for myself in December and have been very happy with it, so I decided to just check out a moss stitch with the yarn combination. 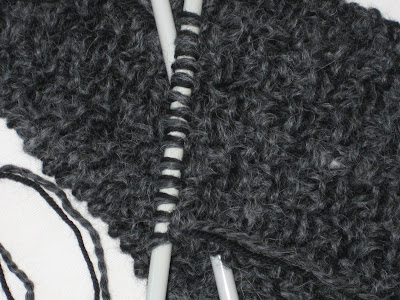 Ooh. Very nice. And very urban and hip -- isn't it funny what a difference the yarn and color make when combined with the stitch? Of course, fair warning, I really like moss stitch in general, so I may be biased :)

I'm sorry you had one of those "bad teacher" days -- I'm very sure that your students probably didn't think you did badly! (Although I know that such reassurances don't always help.) I have done monolingual demonstrations, mostly in the context of trainings for people who want to teach a native california language to folks who don't know it yet. And yes, I get lots of very odd looks :)

I like your urban touch. That would match my daughter perfectly. She loved the hat and now I thought of making her an afghan and I will keep in mind what you posted.

Who knows what I will come up with. It's like you said, Change the needles and play around, because my girl is totally country.

I like moss stitch - it's so comfortable knobbly - and charming.

Very handsome! My husband would look good in that too! Please show the finished product :)

I think he'll like it too. You just reminded me to pick up my knitting tonight.
By the way, I'll check the label but the yarn I was trying to knitt with on my youngest scarf is um fleece like and too thick. I think I'm going to just put it aside, and start with another yarn. It just moves at a snails pace. Is it me?

I like charcoal grey...it's the color for the scarf I made DH. He wears it when he goes camping in the Sierras.

Very nice - how could anyone not like it? I love when my daughter knits things for me.