Spur of The Moment

In the middle of the week, The Professor answered our ringing phone. (We generally have a contest at Willow's Cottage to see who can outwait the other to be the person who has to answer the phone--but that's another story) Our longtime friend up in Santa Barbara was calling to tell us another old friend was in Santa Barbara for a few days. Would we like to get together? Of course!

The Professor and I have deep connections to the people with whom we lived and worked in Papua. I would describe our relationships with them as similar to what soldiers experience with 'battle buddies'. These two women have long been my heroes, single ladies who 'answered the call' to minister by themselves in a wild and sometimes dangerous place. MS1 was a teacher in California and went to Papua to teach national teachers to be better teachers. MS2 was a linguist who developed a writing system for the Citak language and translated the New Testament into Citak. She also pioneered a visiting ministry to the Vakabuis people who, like the Moskona among whom we lived, were traditionally cannibals. MS1 and MS2 are both retired now and still in demand as speakers and writers.
We drove up to Santa Barbara on Friday to have lunch with MS1 and MS2. Oh, the laughter, the stories, the reminiscences!

We decided that it wouldn't take so long to drive up Hwy 154 past Cold Springs Tavern and Lake Cachuma to Solvang for lunch. MS2 is a Southern Girl from South Carolina and had never seen this part of Southern California. So we did.

Highway 154 is the old Stagecoach route that leaves Santa Barbara and climbs up into the mountains behind the city, turns north and winds along the edges of the hills and past Lake Cachuma and Bradbury Dam. 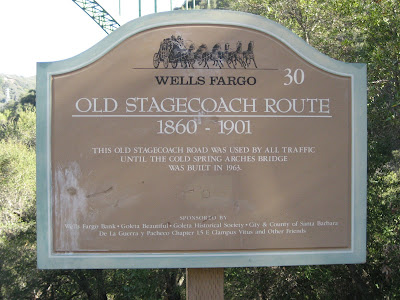 Cold Springs Tavern was a stagecoach stop. The restaurant is still open and famous as a 'destination' for lunch or dinner. 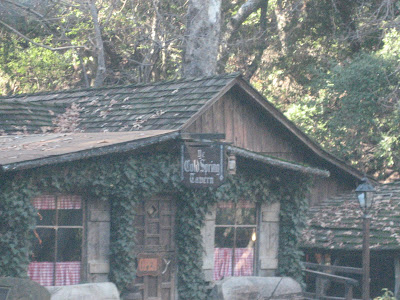 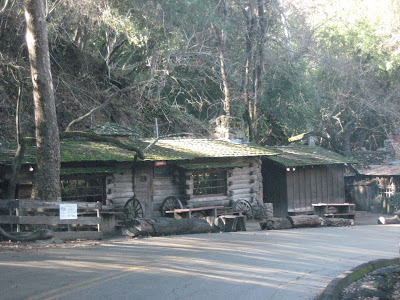 Until the Cold Springs Arches Bridge was built in 1963, all traffic passed by the tavern, but now most cars and trucks whiz by 400 feet above the tavern on the 1,218 foot bridge. If you watch many tv car commercials, you will eventually see this bridge in one of the commercials. It's a favorite of car commercial photographers. You can see why. 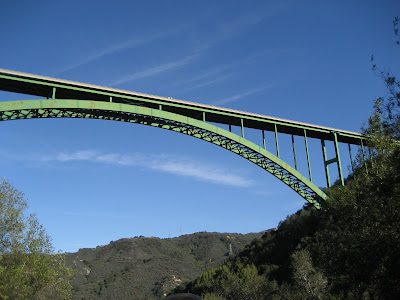 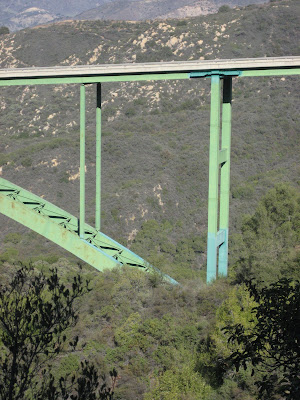 Lake Cachuma is actually a reservoir that was formed when Bradbury Dam was built. The water level in Lake Cachuma is quite low right now due to the severe lack of rain Southern California has had for the past several years. 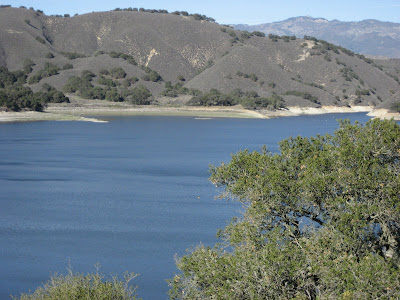 Most people think that Southern California is all smog, freeways and cities. But there are large areas of undeveloped ranch land and vineyards, undevelopable terrain and steep mountains. 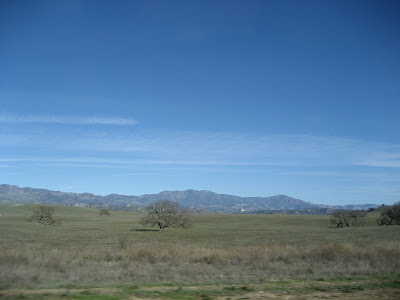 It takes only 45 minutes to drive from Santa Barbara to Santa Inez, about the same amount of time you'd spend on an LA freeway to go 15 miles in rush hour traffic. But the view from the car window is oh-so-different.

Lunch in Solvang--tomorrow.
Posted by Willow at 1:10 PM

Gorgeous photos! Sounds like a great reunion with wonderful friends :)

Hi Willow: I've enjoyed wandering around your blog. Love your photos today-the scenic route is always so nice when you have the time...that bridge is beautiful and the blue skies breathtaking. Sounds like we may have a few things in common... I'll be back for sure.

Wow... amazing, amazing views and amazing friends!!! My life is seeming rather boring in comparison right now ;)
I'm so happy for you two... what a fun weekend!!! (and the phone thing is exactly the same here too! ha!)

You sound to have lived in such fascinating places.
Always enjoy your thoughts on life.
Greetings from Marrakech

I wish I were there! It looks fabulous. Santa Inez sounds familiar, wasn't there a movie with one of my favorite....Andy Garcia that took place in Santa Inez. Gorgeous pictures. Sounds like you're having a great time.

VERY cool pictures~thank you for sharing them with us. And thank you for visiting me at Yahweh's Retreat; I always appreciate your comments.

In the midst of my move I'm so behind in blogging. A month from now I'll be on the other side (unpacking) and will be able to relax a little more.

Oh how I love the back country roads in California! As kids, my dad used to take us for drives along those roads...there really still is a lot of open country once you escape the clutches of the city conglomeration!

Can hardly wait for pictures of Solvang! Thanks for taking us on this trip.

Oh my goodness what beautiful scenery. Don'y you love those spur of the moment trips. Even 30 minutes from home like we did this weekend... so refreshing.

Willow, there is nothing like reunion with battle buddies! I think missionary company is some of the best - all the amazing stories to tell, all the struggles and triumphs.

Just another quick comment to say that EZ for your birthday seems like an excellent idea :) I haven't read Meg Swansen yet, but I'm off to put her on my library list...

I love the pictures! I'm glad you had a great time with your friends.

We drove to Santa Ynez/Solvang in October and were wonderfing about this route. We went up the coast. Next time we go we'll have to go 154 and stop for a bite along the way! Thanks for sharing...

Great photos -- that bridge would terrify me if I had to drive over it. Isn't it wonderful to see old friends and share memories?

This is such an interesting post and so worth visiting. I never thought of Southern California being smog ridden until you guys mentioned it.

Barbara,
Los Angeles was horribly smoggy in the 1970s until California really worked on reducing smog emmisions. The air quality is much better now than it was in the 70s.

We've driven that way once before too a number of years ago. We didn't stop at the Tavern at all, just to take photos and yes, we went there on our way to Solvang one day. Fun memories.

That must have been a good visit with old and dear friends. The Cold Springs Arches Bridge is pretty amazing.The scenery is beautiful - it was good to see parts of Southern CA that aren't filled with freeways and buildings.