When I was a little girl, our family would take our summer vacation in August, and every year we would drive from Portland to San Francisco. My parents loved that town and they loved the drive down the Pacific Coast through the Redwoods--those magnificent towering green giants.

Now I was a Portland girl. I was used to big tall Douglas fir trees, miles and miles of them in the forests, covering Mt. Hood and the coastal mountains. Green was everywhere, and trees were everywhere, and I took it all for granted.

When I was seventeen we moved to a small town not too far east of San Francisco. And then when I was eighteen, I moved to Los Angeles for college. I had never been to LA before, and it was a shock.

My brother and I were driving south and we came to The Grapevine. This is the section of Hwy 5 that winds through the mountains from the south end of California's Central Valley and over into Los Angeles County. The name accurately describes the winding road--grapevine--all twisty and curly. The highest pass has an elevation of 4, 144 feet so there were steep uphill climbs and plenty of curves.

One would expect The Grapevine to reflect to color of the plant--green. But it didn't.

As I said, it was a shock. The Grapevine wasn't green. Nope. It was yellow and brown. And it was hot. Like over 100 degrees. My brother's Oregon car engine wasn't used to that kind of weather and it overheated. We rehydrated the car and climbed back in and started up the last hills and passed a sign that said, "Angeles National Forest". Ummmm. There were no trees here. Is this a forest? Hahaha! Not like our green majestic forests at home in Oregon!

Back in those days of the San Francisco road trips, I noticed the California state slogan was "The Golden State". I asked my dad one day, "Why is California called the golden state?" He replied, "It's because the hills are gold, not green." Because he was my dad, of course I believed him. I think he must have been teasing me. California is The Golden State because the California Gold Rush of 1849 was the impetus that launched California into its run toward statehood in the United States. I didn't know my American history then.

I have traveled up and down The Grapevine too many times to count in the years since that first trip south to Los Angeles. We drove it twice each direction just in this month. It was cooler in November than it was that August afternoon when I was eighteen, but it still looks much the same. 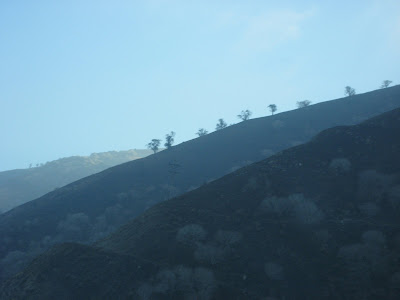 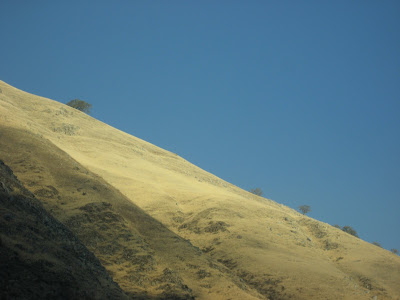 I have never see the Grapevine. Lucky me!

We have rain and near freezing temperatures in the valley today. And it's green.

Willow, those photos are really cool! I can relate to your fondness of green and living near all the woods. Cincinnati is a city filled with trees and parks! I grew up with a backyard that went right into our local park and I spent many years hiking and finding comfort in nature. Moving to PA and the country, it seemed there were endless miles of farm fields with hardly any trees! So much for "nature"! Now my house backs into some woods and I am happy again!

Yes, and how very golden brown it's been this year with so little rain. Was it just last winter that there was 30" of rain recorded in LA - double the norm? How the hills greened up and the yellow mustard grew.

I have never been to California, but think that gold color would be hard to get used to. I'm so used to green, just as you were.

Glad to hear from you and thanks for stopping over and commenting on my farm post. Yes, the farm is fun even when it is freezing out.

When CT and I drove through there on I-5 on our way to Bass Lake/Yosemite, I was surprised to see that big lake off to the west of the freeway - have you ever stopped there? I notice they have a visitor's center.

Oh, yes, and we commented to each other about the Angeles National Forest - how on earth can they call that a forest? And we've native Southern Californians.

We just love all the green, green northern Cal, and Oregon and Washington.