If The Professor does not accompany me on a trip, I think the best way to travel is by train. A train provides the best of all worlds except good coffee. I rode the Amtrak Surfliner from Camarillo to downtown San Diego, a trip of five hours. Five hours on a train = five hours of knitting! I scored a window seat on the ocean (west) side of the train car, but by the time we were far enough south where the tracks run out to the coast, it was already dark.

So on the northbound trip back home on Saturday morning, I made sure I again got a good window seat, so I could watch the beaches fly by. I knew I wouldn't get as much knitting done on this three hour journey. There is just too much to see out the windows. After we left the city and until we reached the coast, my view was mostly this: 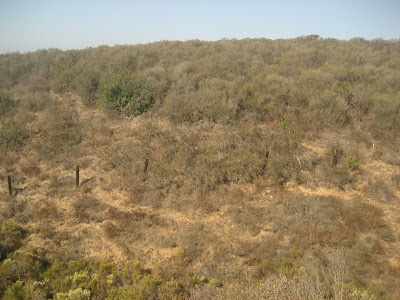 My first peek at the beach! 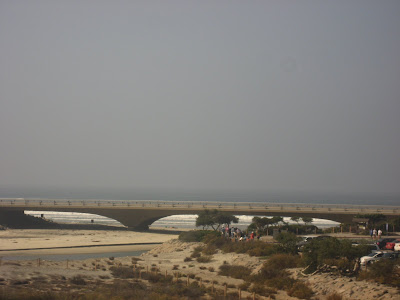 Having taken this train route before, I knew to expect wonderful ocean views. Often one can see dolphins or porpoises swimming off shore a bit. So I knitted with my fingers but not my eyes, and kept a close watch for the playful black animals bobbing up and down in the surf. 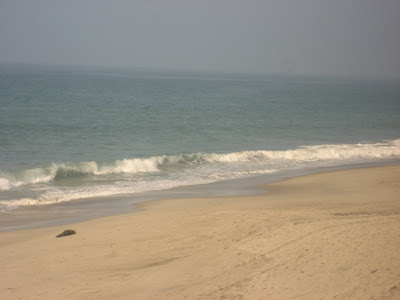 I did see surfers 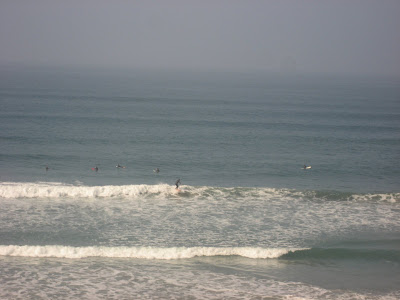 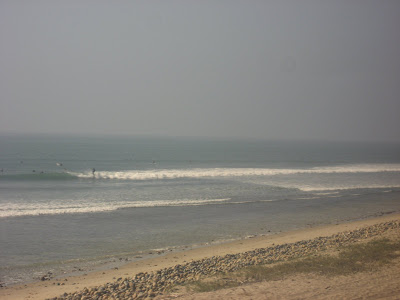 These sea birds were all clustered in one area where a stream washed into the ocean. They were all certainly happy that breakfast was being served. I wondered what was on the menu Saturday morning. 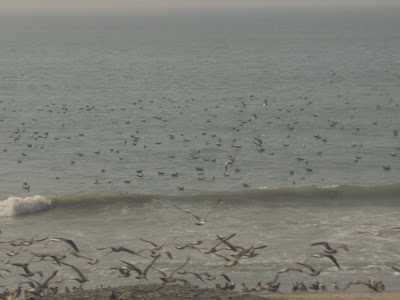 The train travels right along the beach through the towns of Solana Beach, Oceanside, San Clemente. This is the San Clemente Pier. Students of Twentieth Century American history will recall that Richard Nixon's Western White House was in San Clemente. That was the place where he retired to spend the last years of his life. I think he chose a very beautiful spot. I once saw photographs of his San Clemente home. The style, as you would expect here, was Old California Spanish--lots of white walls, terra cotta roofs and steps, bright colored tiles. As the train rumbled through town, I wondered if Nixon ever walked along the pier at sunset. 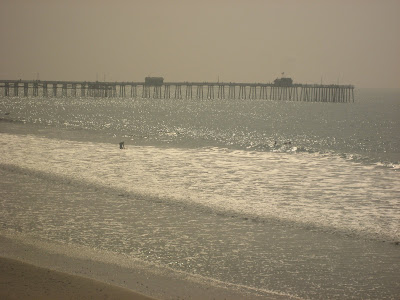 The tracks move inland after leaving San Clemente, traveling through the lovely town of San Juan Capistrano. The mission is not visible from the train, but there were little shops and restaurants with surrounding gardens all along the station.

After short stops in Irvine, Santa Ana and Fullerton, the train pulled into Los Angeles Union Station. Seeing Union Station always gives me a thrill. I think about all the people who have caught trains here, or arrived in the early 1900s to seek their fortunes, or embarked for the east for school and business. I love the movie Funny Girl with Barbara Streisand and one of my favorite scenes is when the girls in the Follies arrive at the train station with their trunks and furs. I can close my eyes and imagine the excitement and hustle and bustle of the passengers making their way down the steps and along the corridors and entering Union Station, looking around, as I do each time I pass through, at the high ceilings, the magnificent chandeliers, the tiled floors and walls.


Then I walked out to the front into the warm November California sun and turned around to look at the landmark clock tower. 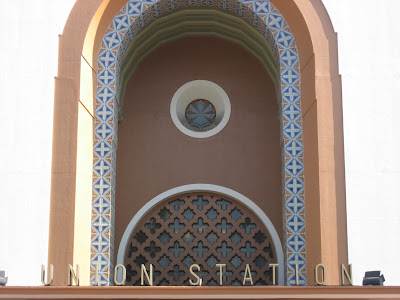 What a splendid, splendid trip! Thanks so much for sharing.

I love Amtrak! I think I am definately a convert to train transportation!!! If we hadn't had such a busy day of running around, I would have taken my knitting too and gotten a lot done. (I didn't think they would let me bring my needles into the theater!). Your pictures are so much fun to look at--like I was there myself!

What awesome photos. I enjoyed the tour of your trip. I have never taken a train far, but one day I would like to take the grandsons to Chicago on the train. I think it would be fun and Chicago is somewhere that I would never go by car. Maybe someday...

I invite you to drop by my blog and read about the Christmas Blessing program that Sharon and I are hosting. I bet you have some wonderful ideas.

Thanks for view of your journey. Did you keep yur knitting as neat as ever while looking out the window?

I've never taken a trip by train. That does look like a lot of fun. :) I love your pictures.