Signs of the Season

Gardening in Southern California regularly surprises me. I grew up in Oregon and after leaving there at age 17 and moving around the world a few times (literally), I ended up back there in my hometown of Portland for 12 years. During those years, I grew a vegetable garden. I planted all my favorite flowers--hydrangeas, roses, lavender, cosmos--and learned how to pull up the tomato plants after the first frost killed them, how to protect the roses from the 15 degree cold snaps that Portland would occasionally endure.
Then I moved to Southern California.
This is the place where my potted tomato plants winter over from year to year. These little cherry tomatoes are on a bush that is finishing up its third year in the pot. Look! Do you see the six little green tomatoes? And the yellow blossoms? What is happening here? It's NOVEMBER, it's THANKSGIVING. 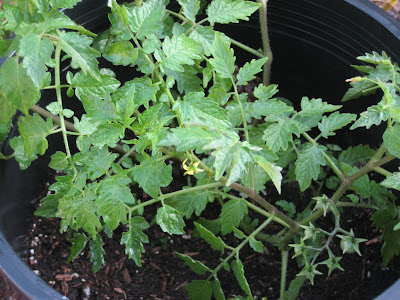 The camellias in my grandma's Oregon garden and later on in my garden bloomed in early spring. Here in Camarillo, my camellias (all nine bushes) are blooming in NOVEMBER. 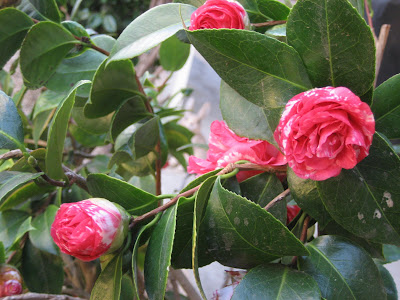 This David Austen rose is named Mayflower. It smells wonderful and its old fashioned petals open up and curl a little and then they quickly wilt and drop off leaving a sweet memory on the steps by my front porch. Its mommy was Mary Rose and I think its daddy was Gertrude Jekyll. I had a potted Mary Rose on my south facing porch in Oregon. It died one coldish winter. The Gertrude Jekyll rose that I planted in memory of my mother whose name was Gertrude grew near the mailbox by my driveway. I dutifully cut back its bare branches every February. 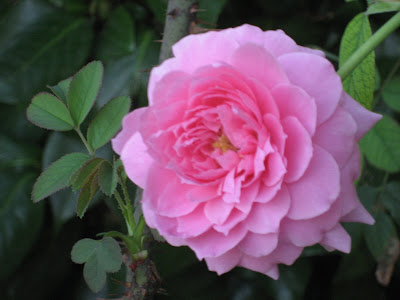 It's NOVEMBER and my Mayflower rose is blooming its little heart out.
The seasons are all mixed up down here. Is it the influence of nearby Hollywood where no one or nothing is allowed to grow old in the land of eternal youth?
No, it's just the weather, the California Mediterranean climate that brings us poinsettia trees perenially growing larger and larger, flowering out with those big, floppy red blooms most of the year, not those wimpy little Christmas house plants that bloom once and then never bloom again and you throw them in your compost bin in February. Zone 23 in the Sunset Western Garden Book.
This morning, the temperature was 51 degrees and it was foggy when I left for work, and I was freezing. Shivering, I drove the six miles to school wearing a long sleeved shirt and a sweater. I layed a sweatshirt over my legs, and I pulled on my gloves because the steering wheel was cold. Now the sun is out and it's in the low 60s.
It may be Thanksgiving week, but it's not an Oregon November.
Posted by Willow at 12:57 PM

I think you're the first blogger I've met that is also Sunset zone 23! And my tomatoes are doing just what yours are doing (the tomato hornworm has transferred his affections to my Prospero rose, however, and was summarily dispatched when I found him). My camellias are just starting and my roses are still pumping out buds. Your post makes me feel like we're next door neighbors!

You've really got a green thumb. I don't... and that's putting it lightly.

I used to have a Gertrude Jekyl rose in my small rose garden before we moved to Lancaster!! It smelled so heavenly, so I was imagining it while I was reading your post! That is quite funny to have tomatoes popping out the week of Thanksgiving!!! It is so much colder here and rainy. We are probably having the weather you were used to!!

How incredible and how beautiful! I live in Idaho and we don't get to enjoy anything like that in the winter!
Thank you for sharing such beauty with us northerners!

Fresh home grown tomatoes in November - that would be nice. I too have roses out but Camelias would be gone by now as we have had heavy frosts.
Oh! and you will need to come to the Cotswolds for a whole week.

Have you made any firm plans for your trip yet?

You have some lovely flowers in your garden. Wish I could put my nose in that rose and breath the fragrance. Yes, we Southern Californian's do have an advantage with the weather I guess...and we think it's cold when the thermometer hits 60 degrees don't we!

My goodness, it is only about 54 here today. It was lovely. Brandon and I went to the farm but it was cooling off by the time we left. I was glad of my winter coat and boots.

Your roses are beautiful! Thanks so much for sharing. I can't believe that my neighbor has a rose blooming in her yard, but of course some of my flowers are blooming to. I see the lilies trying to sprout. I just hope they don't die off when it freezes. This has been a strange fall.

Well, it looks as if we will have one of those cold snaps for Thanksgiving. Clear skies, and bitterly cold East winds blasting down the gorge. The roses are going totally dormant, and only the Japonica camellias are blooming. May all the turkeys you meet be roasted!

Just wanted to wish you a blessed Thanksgiving.

Have a very Happy Thanksgiving Willow!!!! Thanks for being such a great blog friend and a constant source of inspiration :)
Love from PA ~ xoxo Bethany

I love camellias and roses! The pictures are gorgeous. :) It's been nippy in the Northwest this week with highs in the mid 40s. I wanted to wish you a lovely Thanksgiving!

A touch of spring in November...the Mayflower rose is appropriately named for this time of year!