That Which Was Lost Has Been Found

Last month was one of those months when you wonder if you're losing your mind because you keep losing your possessions. I lost a brand new pair of Skacel circular needles, my scissors, and several other items. While I was upset about the financial loss of the needles, I was especially sad about losing the scissors.
I like folding scissors and had bought this particular pair in Solvang after my former pair had literally fallen apart. I had also attached a scissors keep to it. This keep was a treasure. I had purchased the cross stitch kit for it in York, England, on our visit there in June 2004. I had stitched on it during the long car ride from Haltwhistle (near Hadrian's Wall) to Oxford and then had finished it just a few months ago. I thought I had left it in Mia's purse but she said no it wasn't there.
Yesterday I moved the cedar chest in my bedroom and there it was. I'm so happy! I hope my needles will appear serendipitously as well. 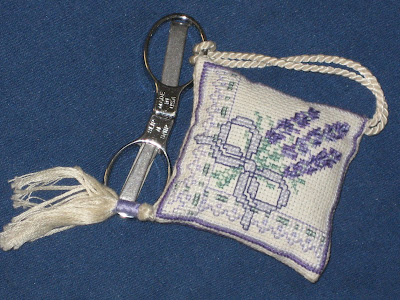 So Victorian and of course I had to have the lavender pattern. 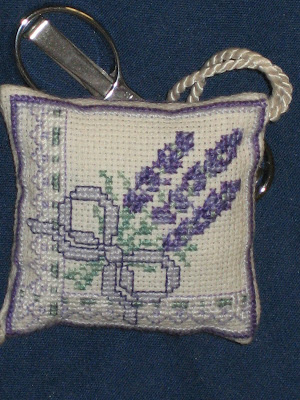 And of course you did an exquisite job on the lavendar pattern! Needles wriggle into the seams of sofas and recliners, sneak under car seats, and slither down the the blackest bottom of the knitting bag. They will turn up when you are looking for something else.

Mumsie, I still have not seen any sign of your circular needle. I don't think you left it at our house.